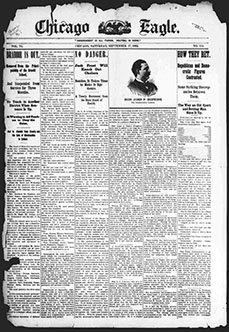 The Illinois Digital Newspaper Project has joined the Library of Congress and the National Endowment for the Humanities in celebrating a major milestone for Chronicling America, a free, searchable database of historic U.S. newspapers; more than 10 million pages have been posted to chroniclingamerica.loc.gov . The University Library has contributed over 300,000 pages, including historic Illinois newspapers such as The Chicago Eagle , The Ottawa Free Trader , and The Broad Ax .

Since 2009, the Illinois Digital Newspaper Project has contributed 24 titles to Chronicling America; a full list of digitized Illinois titles is located at library.illinois.edu/inp . These newspapers, spanning 1865-1922, chronicle Illinois life, including politics, agriculture, entertainment, and more. Hundreds of thousands of pages of Illinois papers are freely available through Chronicling America and the University Library’s Illinois Digital Newspaper Collections ( idnc.library.illinois.edu ).

Launched by the Library of Congress and the National Endowment for the Humanities (NEH) in 2007, Chronicling America provides enhanced and permanent access to historically significant newspapers published in the United States between 1836 and 1922. It is part of the National Digital Newspaper Program (NDNP), a joint effort between the two agencies and partners in 40 states and territories.

“Chronicling America is one of the great online treasures, a remarkable window into our history and a testament to the power of collaborative efforts among cultural institutions nationwide,” said Mark Sweeney, the Library’s Associate Librarian for Library Services. “The Library of Congress is proud to work alongside NEH and all our partner institutions to make this vision a growing reality. In the coming years, we look forward to adding newspapers from the remaining states and territories, as new partners join the program.”

“We at the National Endowment for the Humanities are proud to support the Chronicling America historic newspaper project,” said NEH Chairman William Adams. “This invaluable resource preserves and makes available to all the first draft of America’s history so that we can see the ideas and events that shaped our republic unfold in the headlines of their times.”

The NDNP awards grants to entities in each state and territory to identify and digitize historic newspaper content. Awardees receive NEH funding to select and digitize 100,000 pages of historic newspapers published in their states between 1836 and 1922. Uniform technical specifications are provided to ensure consistency of all content, and digital files are transferred to the Library of Congress for long-term management and access. The first awards were made in 2005. Since then, NEH has awarded more than $30 million in support of the project.

For more information about the Library of Congress, visit loc.gov .

For additional information about the National Endowment for the Humanities, visit neh.gov .

Do you have a story you’d like added to the Library News & Events? If so, please contact Heather Murphy ( hmurphy@illinois.edu ).