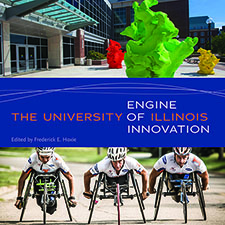 The University of Illinois: Engine of Innovation, illustrated with more than one hundred images, is a collection of essays by experts and students that explore the university’s celebrated accomplishments and historic legacy, including the Mosaic web browser, the discovery of Archaea, and pioneering triumphs in women’s education and wheelchair accessibility. Engine of Innovation’s author is Professor Emeritus of History, Law and American Indian Studies Frederick E. Hoxie.

“This acquisition is especially noteworthy given the role of Professor Hoxie’s book in the celebration of our university’s 150th anniversary,” said William Mischo, acting university librarian and dean of libraries.

“I am honored to have Engine of Innovation honored in this way,” said Hoxie. “The book is a gratifying affirmation of the university’s century and a half commitment to innovation for the public good.”

A display recognizing all of the Library’s millionth volumes, including Engine of Innovation, will be permanently housed on the first floor of the Main Library on the Urbana campus next year. The display is made possible through a generous gift to the Library in recognition of the 14-millionth volume from Library Friend Paul Lisnek, ’80 LAS, MA ’80 LAS, JD ’83 LAW, PHD ’86 LAS. Lisnek, of Chicago, Illinois, is a multi-Emmy, Cablefax, Telly, and Beacon Award-winning television host and analyst. He has been the political analyst for WGN-TV since 2008 and currently hosts Politics Tonight and the Behind the Curtain podcast.

“I have been blessed with much success in my career. I’ve never forgotten that my success is due to the years spent at the U of I, and the countless hours doing research, writing, and studying in the various libraries around campus. I wanted to find a way to say thank you and commemorate all that the Library and university have meant to me. This seemed a fitting and lasting tribute to honor the continued growth of one of the largest libraries in the nation,” said Lisnek. “My hope is that others will think of their own success and find their personal way to say thanks and give back to where it all started.”

The Library will celebrate its 14-millionth volume milestone with a special event in the fall of 2018 upon the display’s completion.