The Center has been buzzing during recent weeks with a new and special collection from a widely-respected U.S. agricultural journalist, John Harvey of Wilmington, Delaware. ACDC associate Stephanie Pitts-Noggle has been working on nine boxes of agricultural periodicals that he has contributed. They range in age from the 1800s to recent years. And what makes them extraordinary is that they include 477 Volume 1 Number 1 issues of agricultural periodicals. Yes, they offer 477 examples of innovation in agricultural publishing in the U.S. across a century and a half.

They will be joined by a yet-uncounted number of V1N1 issues that ACDC staff associate Jim Evans is contributing to the Center. John and Jim have been sharing this unusual hobby for decades. They believe the collection—in whatever size it emerges—can be a useful resource during the years ahead.

ACDC staff members have some promising ideas in mind for featuring and using the collection. What ideas might you suggest? Please pass them along because we will welcome them. 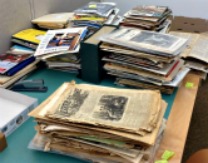 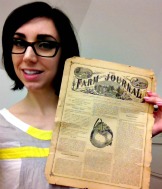 You can read this paper from the 2011 International European Forum via AgEconSearch at http://purl.umn.edu/122006

Stanley Nelson, editor of the weekly Concordia Sentinel , Ferriday, Louisiana, received the 2011 Tom and Pat Gish Award for courage, integrity, and tenacity in rural journalism. This award was presented by the Institute for Rural Journalism and Community Issues, University of Kentucky. Nelson and the Sentinel investigated an unsolved murder from the era of conflict over civil rights. Detailed reporting in more than 150 stories over a four-year period resulted in threats, office burglary, and some cancelled subscriptions. It also resulted in identification of a living suspect and grand jury investigation. You can learn more about his reporting efforts at http://www.uky.edu/CommInfoStudies/IRJCI/Gish2011.html

How Philippine print media covered agricultural biotechnology. Content analysis provided a 10-year view (2000-2009) of media coverage of agricultural biotechnology in the Philippines, first Asian country to approve the planting of Bt corn. Authors of a recent article in the Journal of Science Communication examined patterns of coverage by three national English-language newspapers. They found during the decade:

Social media and agri-food issues in Germany. Recently we added to the ACDC collection a 2010 article about this subject in the International Journal of Food System Dynamics . Using framing theory, researchers analyzed agri-food content of web-based blogs (2009) and discussion groups (2007-2009) in Germany. Postings from the whole German-speaking social media community on the internet were scanned. Findings revealed trends in numbers of postings during that period, ranging from fewer than 200 to more than 1,000 per week. The top five agri-food issues accounted for almost two-thirds of all 62,803 hits:

All contentious issues were found mainly framed in a two-sided way.

“There’s a ton of opportunity for you in agricultural journalism.” University of Illinois members of Agricultural Communicators of Tomorrow (ACT) heard that message during early May from three respected agricultural journalists. Guest speakers included Jeanne Bernick, editor of Top Producer ; Holly Spangler, associate editor of Prairie Farmer ; and Mike Wilson, executive editor of Farm Futures . Here are some of the points they emphasized in encouraging students to consider journalism and editorial careers related to agriculture:

The ACDC collection includes a wide selection of resources about careers in agricultural journalism. Check with us at docctr@library.illinois.edu for help in reviewing them to fit your interests.

Let’s banish the word “amazing.” So far, that is the top-ranked advice of those submitting entries for the 2012 List of Banished Words. The project at Lake Superior State University highlights nominations for Words Banished from the Queen’s English for Mis-use, Over-use and General Uselessness.

“Banish it for blatant overuse and incorrect use – to stop my head from exploding,” one nominator urged.

Another possible candidate? Nominations continue throughout the year. We wonder how many might nominate “pink slime” as an expression to be banished.

Please pass along your reactions, suggestions, and ideas. Feel free to invite our help as you search for information. And please suggest (or send) agricultural communications documents we might add to this unique collection. We welcome them in hard copy (sent to Ag Comm Documentation Center, 510 LIAC, 1101 S. Goodwin Avenue, Urbana, IL 61801) or in electronic format sent to docctr@library.illinois.edu .