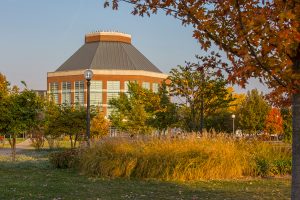 Funk Library (also known as the ACES Library and the Funk ACES Library) currently supports research and provides extensive print and online collections for numerous campus units, including the:

The library is also the home of the Agricultural Communications Documentation Center (ACDC).

The librarians, staff, graduate assistants, and student assistants at Funk Library are here to help.  We encourage you to contact us about research questions, data management needs, instruction requests, collection suggestions, course reserves, and more.

Funk Library is located on floors 2 through 5 of the ACES Library, Information and Alumni Center, which was dedicated in 2001. The distinctive, octagonal building has big windows that create an inviting space to work and study, whether in a study carrel, at a large table, or in a group study room.

The library is named after the Funk family and its patriarch, Isaac Funk. Isaac Funk (1797-1865) was an influential early pioneer, who settled in Illinois in the 1820s. Over the next four decades, he built an agriculture and livestock empire, which was continued and expanded by his descendants. In 1986, the Funk family made a generous gift to the University.  This gift from the Funk family with the help of others eventually became the funds used to build the library, which was then named in their honor.