Who was one of the first Mexican American librarians in California? Who was one of the co-founders of REFORMA, the National Association to Promote Library & Information Services to Latinos and the Spanish Speaking? Who was the first Mexican American women to hold the office of ALA Executive Director? If you answered, “Elizabeth Martinez,” you’d be correct!

Elizabeth Martinez was born on April 14, 1943 in Pomona, California. Growing up in Orange County, she always wanted to promote cultural understanding no matter what field she worked in. Martinez didn’t originally focus on working in libraries, but they held a special place in her heart since she was a child, as she often went to her local public library. However, while pursuing her Bachelor’s degree in Latin American studies at UCLA, she took a course in children’s literature to fulfill a credit. This course opened her eyes to the world of librarianship and her goal was set. She then graduated from the University of Southern California with a Master’s in Library and Information Science in 1966, becoming one of California’s first Mexican American librarians.[1]

END_OF_DOCUMENT_TOKEN_TO_BE_REPLACED

Librarianship is a field that has long been dominated by women. According to a fact sheet published by the Department for Professional Employees, women compromise 81% of enrollment in graduate library science programs, 82.8% of all librarians, and 75.9% of all library workers [8]. However, this dominance in terms of numbers has historically not translated to true equity in other dimensions.

According to a 1967 study of academic librarians, median salary differences between male and female librarians tend to widen as experience in the field increases – even when levels of education between the two groups are equal [4]. This study emerged at a time when roughly four out of five librarians in the United States were female, and the discipline of librarianship was gaining legitimacy, with some concerned that “librarianship cannot upgrade itself without upgrading opportunities for women… Nor should it expect to gain the public esteem that it seeks by tactically endorsing inequality of opportunity, and furthering, by its own inaction, the all-too-familiar image of librarianship as a passive, unchallenging, and low-paid profession” [4]. END_OF_DOCUMENT_TOKEN_TO_BE_REPLACED

Since 1970 the Women in Libraries Newsletter (and Women Library Workers Journal,1975-1993) have provided information resources for women working in libraries. Older issues are still information rich for current and future readers.

Read on to learn more about the art and history of Women in Libraries and Women Library Workers Newsletters!

END_OF_DOCUMENT_TOKEN_TO_BE_REPLACED

While most of the American Library Association Library War Service’s efforts were concentrated in camps and hospitals in the United States and Europe, there was also a need for books for the soldiers stationed along the Mexican border. Chalmers Hadley, the librarian of the Denver Public Library, surveyed the desire for books among soldiers at the border and found them wanting.

In early 1918, Hadley observed that, “It is vastly different to find thousands of men requesting books, and hanging on a promise of some … It will be a great misfortune to the men and a lost opportunity to the A.L.A. if the traveling libraries are not provided.” [1] To satisfy the demand for books, two traveling libraries were established by the ALA and headquartered in the San Antonio Carnegie Library and at the El Paso Public Library in Texas.

END_OF_DOCUMENT_TOKEN_TO_BE_REPLACED

In the middle of all of the holiday cheer, December is also a month for librarians across the country to think back on those who gave back to their communities.  The late Lutie Eugenia Stearns, born on September 13, 1866, influenced many within the field of librarianship.  With the holiday season upon us, who better to write about than a woman who selflessly dedicated her life to advocate for those whose voices went unheard?

Lutie Stearns began her career as a teacher in the Milwaukee Public Schools.  With her apt skills in book collecting, she soon caught the eye of the Milwaukee Public Library’s, Minnie M. Oakley.  After Minnie’s death in 1895, Stearns was then appointed head Librarian. END_OF_DOCUMENT_TOKEN_TO_BE_REPLACED

There are several units within the American Library Association that support women in the library profession and as a whole. Many of these groups arose during the second wave of feminism in the 1960s-80s in response to political and social movements outside of the ALA. Women in librarianship wanted the predominately-female profession to be regarded with the same respect and pay scale as other professions as well as more equity in ALA leadership.

One of the first major committees that is still around today is the Committee on the Status of Women in Librarianship (COSWL). This committee came about after several years of advocating by ALA members and the eventual approval at the 1976 Centennial Conference in Chicago.[1] Initially, a proposal was presented during the 1974 Annual Conference[2] and then discussed by Council during the 1975 Midwinter Meeting.[3] The ALA Executive Board endorsed a set of guidelines put forward in 1976, drafted by a standing committee appointed by the ALA president.[4] The committee has a list of seven responsibilities, all of which support the growth of women inside and outside of the field of librarianship. COSWL also sponsors several research projects, publications, and subcommittees related to women in libraries, such as the Advance Women in Library Management, Minority Women Oral History Project, and the COSWL Study. ALA currently maintains a list of resources on the COSWL homepage related to women’s issues.

END_OF_DOCUMENT_TOKEN_TO_BE_REPLACED

Her experience as Director of the Detroit Public Library and personality made her well suited for the position of ALA President. E.J. Josey noted that: “Her years of service in the trenches in Detroit before being appointed director of the library system provided her with management skills as well as a desire to love and serve her fellow human beings.”[1] Jones’ career took her all over the world, but most of her activities were community driven, working on the revitalization and cultural development of Detroit.[2] END_OF_DOCUMENT_TOKEN_TO_BE_REPLACED 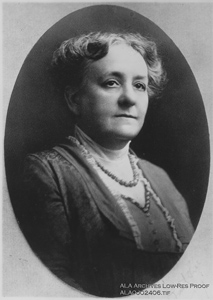 Born to a Quaker family, Plummer attended Wellesley College from 1881-1882, studying languages and creative writing.  Her librarianship career began when she enrolled at the age of 30 in “the first class in library science on the planet”[1], Melvil Dewey’s 1887 class in the School of Library Economy at Columbia College.  Distinguishing herself immediately in her studies, she was selected to present her experience in library school at the American Library Association’s 1887 meeting (“The Columbia College School of Library Economy from a Student’s Standpoint,” printed in Library Journal, September-December 1887). END_OF_DOCUMENT_TOKEN_TO_BE_REPLACED

Festschrifts are a common way to honor someone in academia, and line the shelves of many academic libraries. They typically contain academic essays related to the person’s life work, contributed traditionally by the person’s former doctoral students and colleagues. But what about a Festschrift that’s instead full of nothing but praise for the person being honored gathered from common workers in their field, and furthermore isn’t for an academic, but instead for a public-service librarian? This is the final issue of Libraries magazine, honoring one Mary Eileen Ahern. END_OF_DOCUMENT_TOKEN_TO_BE_REPLACED

The more things change, the more they stay the same, or so you will think when you look at this laundry list of key considerations Katherine L. Sharp outlines for someone setting up a library in her writing “Catechism for Librarians.” Unlike a religious Catechism, she outlines not what to believe but a series of questions a librarian must answer for herself. Despite being only 3 by 5 inches in size, 24 pages long, and never published, these 180 questions still provide a reasonable guide to someone setting up a library today. And their relevance is still more interesting when you consider that this was written in 1891, with no knowledge of the sweeping changes in librarianship and technology that were to come. A few of the more prescient questions are presented here in their modern context:  END_OF_DOCUMENT_TOKEN_TO_BE_REPLACED