In the middle of all of the holiday cheer, December is also a month for librarians across the country to think back on those who gave back to their communities.  The late Lutie Eugenia Stearns, born on September 13, 1866, influenced many within the field of librarianship.  With the holiday season upon us, who better to write about than a woman who selflessly dedicated her life to advocate for those whose voices went unheard?

Due to her love and passion for books, she also helped found the Wisconsin Free Library Commission.  Stearns believed in free books and service for all, so she began her own traveling library.  As a self-declared radical, Stearns once stated, “I’ve been called ‘a radical’ and a ‘communist but I recall that Susan B. Anthony was termed ‘an old hen’ and Jane Addams was designated . . . as ‘the most dangerous person in America’ so I’m in good company.”[1]  She traveled around the state of Wisconsin and soon became not only an advocate for free libraries, but also for women and children.  Her belief was that everyone should be able to have access to books no matter the age or gender of the patron. 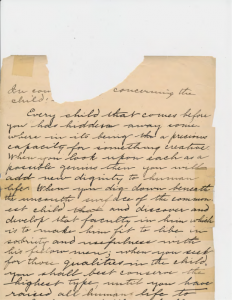 Despite her well known speech impediment, Stearns was undeterred and her speech was successful.[3]  Her passion for advocating for children’s literacy didn’t stop there.  She published her 1894 Annual Conference Report on Reading for the Young in December of 1894 as well as her “In Conclusion Concerning the Child” within the American Library Association.[4] 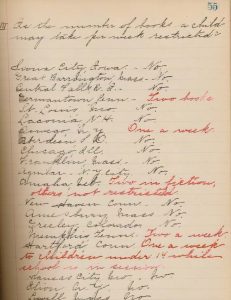 (Survey questions that formed the basis for her 1894 Annual Conference Report on Reading for the Young that was published in Library Journal, December 1894. Found in record series 97/1/1)[5]

Because her well known activism and changes in the world of libraries, Lutie Stearns was inducted into the ALA Hall of Fame in 1951 and was among one of the first people to be honored in the Wisconsin Library Hall of Fame in 2008.  Although, Ms. Stearns can be remembered as a great librarian and teacher, she has left more than just that in her legacy.  Ms. Stearns is a perfect example of how important the gift of giving and the gift of literacy that all librarians have to offer can truly be, especially during this holiday season.