A Book for Every Man: The ALA Library War Service

Within weeks of the United States’ entry into World War I in April of 1917, the American Library Association and its members 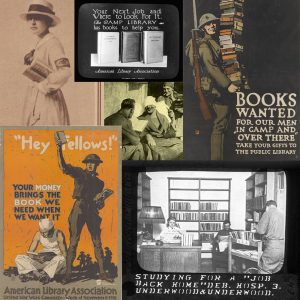 undertook a massive volunteer effort to raise funds, collect books, magazines, and other reading materials for American soldiers in camp libraries at home and abroad. The Library War Service was the first large public engagement program that the Association launched and its success spoke of the wider public reach the ALA could obtain. This exhibit is about ALA’s World War I Library War Service efforts. Curated by Cara Bertram, with additional research from Salvatore De Sando, Sharon Pietryka, Denise Rayman, and Lydia Tang.

Celebrating the Organizers!: 140 Years of Library Conference Planners in Letters and Images at the ALA Archives

Since at least 1853, efforts have been made to organize the library profession nationally and internationally, the American Library Association was organized at the 1876 Congress of Librarians. This exhibit highlights A.L.A. Archives holdings from that time. Curated by Salvatore De Sando, with additional help from Cara Bertram, Leanna Barcelona, Sharon Pietryka, and Madison Well.

Out of the Closet & Onto the Shelves: Librarians and the Oldest Gay Professional Organization in the U.S. – June 2018 – curated by Sarah Brewer.

A Book for Every Man: Commemorating the Centennial of the Library War Service though the American Library Association Archives – April 2017 – Curated by Leanna Barcelona 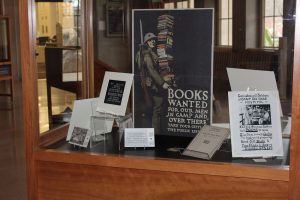