World War I spread tragedy and despair across the world, but the American Library Association worked to brighten the spirits of wounded soldiers. In 1917, the American Library Association provided library services to wounded soldiers and delivered books, newspapers, and magazines to more than 200 army and navy hospitals.  The ALA was able to send trained librarians to 75 military hospitals to aid in the outreach.

END_OF_DOCUMENT_TOKEN_TO_BE_REPLACED

Read on to learn about Library War Service publications!

END_OF_DOCUMENT_TOKEN_TO_BE_REPLACED 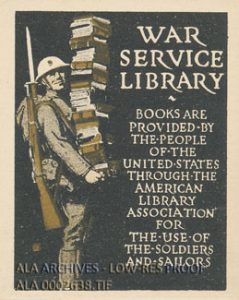 With centennial of the United States’ entry into World War I coming up on April 6, the American Library Association Archives is commemorating the centennial of the Library War Service, which was formed shortly after the US entered the Great War. Keep an eye on our blog, social media, and our site for the different ways that we’re remembering the Library War Service! END_OF_DOCUMENT_TOKEN_TO_BE_REPLACED

During the course of U.S. involvement in World War I, the American Library Association collected $5 million in donations for the Library War Service, a service that accumulated a collection of ten million publications and established thirty-six camp libraries across the United States and Europe. It was the ALA Library War Service’s mission to provide “a book for every man.”

The Library War Service accomplished a great deal in a short time. According to the June 1918 War Library Bulletin, there were 385,310 books shipped overseas. At that time, there were also 237 small military camps and posts equipped with book collections and 249 naval and marine stations and vessels supplied with libraries. [2] The books were well-received by soldiers and sailors alike, and unmistakably utilized widely. Vice-Admiral Albert Gleaves of the US Navy wrote:

“Do the sailors read very much? Do the soldiers read very much? I know from personal observation that the books were in constant demand, and that they were in constant circulation. They were placed as a rule near the troop compartments for the soldiers, and for the sailors they were placed in their compartments. The books were allotted to them and they would draw these books; they were not responsible in any way for their condition or what became of them. If the books were lost, that was profit and loss to the A. L. A., and didn’t concern the sailor man. There was no compulsion, no restraint; they had free access to these books.” [3]
END_OF_DOCUMENT_TOKEN_TO_BE_REPLACED

In honor of Black History Month and the 100th anniversary of the United States’ entry into World War I, it is only fitting to discuss the service of African Americans in the war and to highlight a few materials we have here at the archives that illustrate their contributions.

In 1917, Congress passed the Selective Service Act, which Woodrow Wilson then signed into law, thus initiating the draft. It required all young men, regardless of race, to register for service [1]. Subsequently, more than 2.2 million black men registered over the course of four draft calls [2], of which nearly 370,000 were then inducted into the Army [3].

W.E.B. Du Bois was one of many African American leaders and activists who saw the war as a chance to advance racial progress, hoping that racial equality would follow at the war’s end when Americans saw their loyalty and service to their country. He urged black men to put the fight for civil rights on hold during the war, writing in The Crisis, “first your Country, then your Rights!” [4].

END_OF_DOCUMENT_TOKEN_TO_BE_REPLACED

The connection between the ALA and the American Merchant Marine Library Association (AMMLA) is a little-known example of collaboration and cooperation between organizations. AMMLA developed out of the World War I Library War Service and ALA’s efforts to provide books and resources to men aboard U. S. vessels. (For more information about the Library War Service, please see our research guide). After the war ended, the library service for American servicemen was turned over to the War and Navy Departments, and the Library War Service Committee hoped that it’s work aboard U.S. ships would be taken over by either shipowners or another organization [1]. Finally, after the request from ALA to form a peace-time library service for this purpose, Alice Sturdevant Howard, Chief of the Social Service Bureau of the Recruiting Service of the United States Shipping Board, organized the American Merchant Marine Library Service in 1921 [2]. To aid the effort, ALA donated the leftover book stock used in the Merchant Marine Service as well as some unexpended funds [3]. END_OF_DOCUMENT_TOKEN_TO_BE_REPLACED

“[T]he blind soldier is the spirit of war, of the battlefront, of France,” said Jerry O’Connor, a blinded Cantigny veteran from World War I, during his award-winning speech titled The Duty of the Blind Soldier to the Blind Civilian at the Red Cross Institute for the Blind’s Public Speaking Contest in 1920.  “We have the mud of the trenches upon our feet, gold chevrons upon our sleeves, and the scars of War upon our faces.  Whether we deserve it or not, people stare at us, send us gifts, invite us to their homes, give us sympathy.  Such circumstances place the blind soldier in a position where, when he speaks, he can be heard.  Consequently, if the conditions of the blind can be improved, the blind soldier should speak – and be heard.”  Identifying two major obstacles for blind people as “the habit of the public to look upon the blind man as incapable, sensitive, and helpless” and the lack of educational opportunities for the adult blind person, O’Connor called for public programs to address these obstacles for the blind.  One of the institutions responding to this call for action would be the American Library Association. END_OF_DOCUMENT_TOKEN_TO_BE_REPLACED

Burton Egbert Stevenson (1872-1962) was surprised to find himself named the foremost ALA representative in Europe for the Library War Services campaign during the first World War.  A college dropout from Princeton University and aspiring novelist, he fell into the library profession after marrying Chillicothe Public Librarian, Elisabeth Shephard Butler and accepting a librarian position at the same library in 1899. END_OF_DOCUMENT_TOKEN_TO_BE_REPLACED