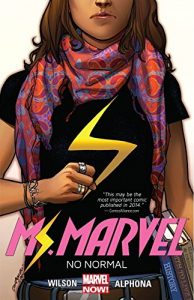 “Kamala Khan is an ordinary girl from Jersey City — until she’s suddenly empowered with extraordinary gifts. But who truly is the new Ms. Marvel? Teenager? Muslim? Inhuman? Find out as she takes the Marvel Universe by storm! When Kamala discovers the dangers of her newfound powers, she unlocks a secret behind them, as well. Is Kamala ready to wield these immense new gifts? Or will the weight of the legacy before her be too much to bear? Kamala has no idea, either. But she’s comin’ for you, Jersey!” – Goodreads

This is so. much. fun. Kamala is a hilarious and relatable hero, and there are so many moments where her sense of humor or awkward social situation really stand out as exceptionally true to life, and this reader just kept thinking, “IT ME!” In this introduction to what is now a ten-volume series, Wilson does an incredible job introducing a compelling cast of supporting characters that includes Kamala’s Muslim, immigrant parents who are so fully realized and nuanced. The adventure and suspense is well done, and the artwork is stunning, which is no surprise given that it’s done by the veteran artist from the Runaways series. Addictive, funny, and full of heart, this is a series that is not to be missed!

Posted by Pietrus Victoria at 8:50 pm