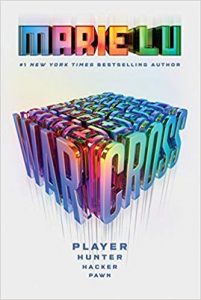 Orphaned college dropout turned bounty huntress, Emika Chen, survives a futuristic New York City by using her expert hacking skills to uncover illegal gamblers – specifically those who bet on the virtual reality game Warcross, created by prodigy billionaire Hideo Tanaka. Emika’s decision to hack the opening ceremony of the international Warcross championships for some quick money gets her noticed by Tanaka and tapped to join the competition; however, she’s not just a competitor. She’s gathering intel for the game creator and is on a mission to figure out who is trying to destroy the world-renowned tournament.

Emika’s fierce intelligence, rainbow-colored hair, inventive tattoos, and surprising but plausible vulnerability all combine to create a heroine worth reading about. She is also surrounded by an inspiring, nuanced ensemble of supporting characters who reflect the diversity of an international arena, including representation of characters with disabilities and who are LGBTQ. This story presents an added sophisticated layer of asking profound questions about our world, our society, our technology, and our future – what will happen when technology evolves to be like the kind depicted here? Emika borders on being an anti-hero as so much of her power comes from illegal hacking, yet one cannot resist cheering emphatically for her and also hoping that when immersive yet potentially dangerous technology like the kind in this book becomes a reality, someone just like her will be around to do the right thing.

This impressive blend of heart-stopping action and philosophical questioning is remarkable; given that it has only one follow-up book to round out a duology (Wildcard published Sept. 18, 2018 – review to come!), the cliffhanger conclusion suggests a satisfyingly robust but manageable second narrative arc that will likely present a similarly well-paced combination of addictive adventure and provocative questions.

Posted by Pietrus Victoria at 1:37 pm