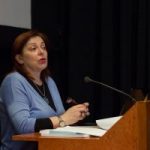 Beba Stankovic has been very busy since her time at the Mortenson Center, setting up a Youth Department at her home library in Pozarevac, Serbia and more recently, moderating the Forum Creative Europe 2016 – Public discussion and concluding remarks of the analysis of international cooperation potentials in the areas of literature and publishing.

Two of her abstracts have also been accepted at regional conferences in June, the Western Balkan Information Literacy Conference In Bosnia & Hercegovina, and DisCo 2016 in the Czech republic. 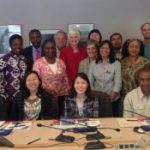 Bhakti Gala continues her professional advancements in the new year as a member of the ALA IRRT Membership Committee 2015-16. She has written a short article, ‘The Advocacy Approach: Networking and Online Volunteering’ in International Leads with reference to the Mortenson Center program’s contribution to her volunteering activities. Congratulations, Bhakti! 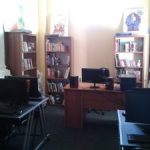 A quote from Beba: “The same day after opening we had Creative Writing Workshop for students which was held by Miomir Petrovic PhD, dramatist and writer. It was very well attended and [the] Department is working now with full steam and with lot of new young patrons.” 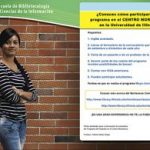 Two colleagues from the University of Costa Rica, Graciela Quesada Fernandez and Ramon Masis Rojas, attended the 2014 Associates program, which included a tour of the Champaign Urbana Fab Lab. Fernandez and Rojas are now leading the way toward building a fabrication laboratory at their university library. They hope to implement a partnership between the University of Costa Rica and the Mortenson Center for future collaboration.

Poster about the Mortenson Center by Fernandez and Rojas

Public librarian Beba Stankovic from Serbia was an Associate in 2014. After the program, Stankovic became very involved with the International Federation of Library Associations (IFLA). She attended an IFLA Congress, presented a poster session, “It’s Your Right to Know”, and organized three sessions for the IFLA Women, Information and Libraries Special Interest Group. At her home library, the Public Library ‘Ilija M. Petrovic’ Pozarevac, she helped to begin a new cycle of free courses on information literacy for retired patrons and just received money from the Serbian Ministry of Culture for a new Youth Department. Most recently, Stankovic was elected Vice President of the Serbian Library Association. She also received one of the most prestigious awards in Serbian librarianship, the “Djura Danicic” award, given by the Community of County Libraries together with National Library of Serbia. 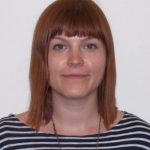 2012 Associates Program alumna Darya Bukhtoyarova visited the Center as the senior manager of the Nazarbayev University (Kazakhstan) Library’s Patron Services department. In April 2014, she began a new job with Thompson Reuters as a customer education specialist, conducting workshops and training for librarians, graduate students and scientists. So far she has trained over 1,500 users in Kazakhstan, Russia and Kyrgyzstan in working with e-resources, publishing, and research evaluation.