On the night of Monday, February 10, 1777, Lord North the British prime minister sat at his desk at 10 Downing Street and wrote a quick note to his friend and chief intelligence official, William Eden. In addition to forwarding to Eden a letter intercepted by the spy John Vardill, North revealed his concern about the American victory at Trenton, New Jersey some six weeks earlier: I am sorry to tell you that I am more apprehensive than I was that there is some truth in the article of news concerning the engagement at Trenton. 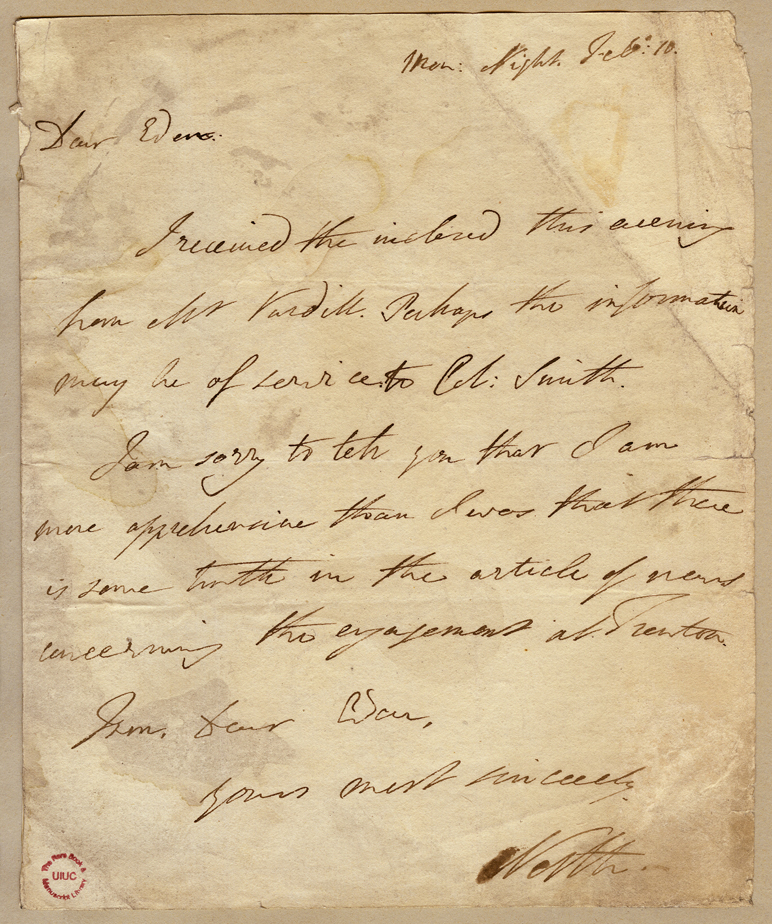 North had reason to be concerned. Before Washington’s victory at Trenton in late December 1776, the fate of the American Revolution hung in doubt and the colonists’ morale had reached its lowest point. Forced to retreat from New York City through New Jersey, Washington found himself and his army encamped in Pennsylvania as the campaign season drew to a close for the winter. Thomas Paine, visiting Philadelphia, discovered the American cause to be in such a perilous state that he endeavored to revive it with a series of pamphlets. The first began: “These are the times that try men’s souls. The summer soldier and the sun-shine patriot will, in this crisis, shrink from the service of his country: but he that stands it now, deserves the thanks of man and woman.”

Washington believed that a victory at this nadir would go far in rousing the spirits of the troops and the American colonists in general. On the morning of December 26, 1776, Washington led his troops across the nearly-frozen Delaware River and through a snowstorm to seize some 900 Hessian mercenaries at Trenton. The Continental Army went on to defeat the British at Princeton a few days later. In the words of David McCullough, “[I]t was Trenton that meant the most, Trenton and the night crossing of the Delaware that were rightly seen as a great turning point. With the victory at Trenton came the realization that Americans had bested the enemy, bested the fearsome Hessians, the King’s detested hirelings, outsmarted them and outfought them, and so might well again.”

Indeed, Washington’s victory at Trenton boosted morale throughout the colonies and rekindled the drive that would lead to victory and American independence half a decade later. North’s apprehensions would prove to be well-founded.

Acquired by The Rare Book & Manuscript Library of the University of Illinois at Urbana-Champaign in June 2008, Lord North’s letter documents the prime minister’s realization that perhaps the empire which he led could be humbled by defeat at the hands of the Americans. CDC

One thought on “Letter Reveals Lord North’s Apprehension Over British Defeat at Trenton, 1777”