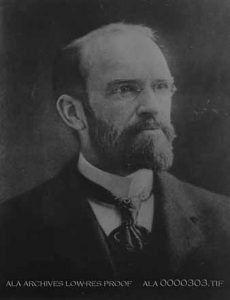 The ALA Archives staff wants to say happy birthday to Melvil Dewey, who is a mere 164 years old today!

Dewey might be most famous for his Dewey Decimal Classification system for library books, though many American libraries now use the Library of Congress classification system, the Dewey Decimal System is still being used today. Dewey was active in the library profession and was also one of the founders of the American Library Association, opened the School of Library Economy at Columbia College, called for the formation of the ALA Council, and was involved in the founding of the Spelling Reform Association.

It may not be surprising that Dewey was an energetic member of the ALA, but you may not know that he served as the president twice, served as the treasurer three times, and was the secretary (now Executive Director) from 1879-90 and then again in 1897-98!

Melvil Dewey’s papers are held at Columbia University Libraries. The ALA Archives also has a small holding of photographs and correspondence from Dewey, notably in the  Henry J. Carr Papers, Annual Conference Correspondence, Conference Photographs, and the Library School Photographs.