Sometimes in the archives you look for one thing and find something completely different, but wonderfully fascinating. A letter for the Harvey Dunn Poster Campaign is one of those great and random finds in the archives. The letter, dated June 26, 1923, was a call for librarians to hang up a poster of a man reading a book in a factory, the image of the poster was originally from a painting by Harvey Dunn. Carl Milam, then Secretary of the ALA, stated that the, “Harvey Dunn poster … speaks directly to the people who need to learn of the hidden treasures which are theirs for the asking.”[1]

This letter on its own might not seem all that important. However, within a separate record series, the ALA Archives holds a copy of the actual poster. Archives staff have long known about the poster and even had it digitized, but not much was known about the context surrounding its creation. The letter from Milam gives the poster a story. 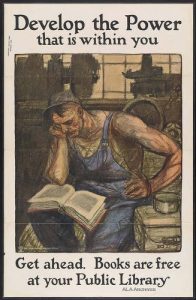 The poster was part of a campaign to make people aware of the resources provided by libraries. The original painting managed to say a lot visually and the Association found it fitting for the campaign, “In order to inaugurate a campaign for education in the use of the library … the Association has obtained this striking Poster whose appeal concentrates many lessons and does away with the need for many words.”[2] Milam urged librarians not to hang the poster up in their libraries, but instead to:

Hang them in factories, in shops, in street cars, in the market places, at fairs, conventions and all sorts of men’s meetings – at the cross roads, where people come and go – and watch the result in library patronage. Don’t overlook the shops and laboratories connected with schools and colleges. [3]

Milam was stressing the ALA’s goal to reach individuals who would normally not go to the library. Milam noted that while people were ambitious and wanted to be better informed, they did not know that books would help them achieve those goals and the poster was to show people that education was attainable through libraries.

With the letter, we now know larger goals behind the poster. We can now appreciate the poster beyond its aesthetic value and, with the additional context, the research value of the item has drastically increased. We know where the image came from, why the ALA produced the poster, and how it fits into the bigger picture of the ALA’s enlarged program after World War I and its efforts in educational outreach.