If you’re a dedicated reader of our blog, you may know that during World War I the ALA sent over 10 million books and magazines to camp libraries and overseas for the use of servicemen. The collection development of these libraries was focused on having material that could help the men prepare for a job back home, such as books about business, engines, plumbing, carpentry, cement, and trains, but they also recognized that the servicemen needed entertainment, and stocked the libraries with magazines and “good, live fiction.” These library services still supported the servicemen after the armistice as well.

But what happened to all those books when the servicemen came home? The post-war life of the War Service books was very practical: ALA-managed libraries were transformed into military-managed libraries after the war. And as these military librarians eventually weeded them out of the collection or otherwise discarded them, War Service books were sold into private hands or distributed to public libraries for further use.

The ALA Archives holds a small selection of former War Service books as examples of how these books were marked and circulated during this important early ALA campaign. Here are a few pictures from the books in our collection:

You may recognize this book-loving Marine from this poster soliciting book donations featuring the same artwork!

The books also show how the books were circulated to soldiers:

Some other libraries didn’t bother with circulation cards:

One book in our collection came into the hands of the archives in a particularly interesting way:  it was sent to the ALA in 1989, and got a small write-up in the April 1989 issue of American Libraries as being extremely overdue! 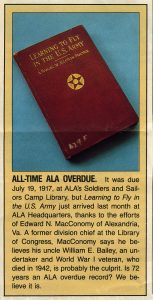 (But if you happen to have a Library War Service book in your hands at this time, don’t worry, there’s no fine and the ALA doesn’t want it back!)

These particular War Service books are available for use at the ALA Archives, Record Series 89/1/60, but other “veterans” of this war effort are still commonly available in used books shops and other places antiques are sold.