The Stonewall Rebellion on June 28th, 1969 in New York City inspired queer people of various backgrounds to organize coalitions to combat discrimination, and advocate for civil rights in a time of intolerance and police brutality. This is the instance that many recall when Pride month comes around, as a singular, pivotal moment in history that defined much of the struggle to come. Nonetheless, it is just as important to consider the history of achievements made by local queer activists as well.

In the years following the rebellion, students and Champaign-Urbana residents sought to form queer rights advocacy groups. Jeffrey Graubart founded a Gay Liberation organization through the University in 1970, stressing the importance of heterosexual education on gay struggles as key in the advancement of gay rights [1]. Although this chapter disintegrated by 1973, those in the organization advocated against homophobic policy within the city and paved the way for other gay organizations to come.

The Gay Illini (initially called the Gay Students’ Alliance), founded in early 1975, became the central group for gay student concerns. Through collaborations with both the University and greater Champaign-Urbana area, they made significant achievements in their first two semesters of operation. The Gay Switchboard, established in fall of 1976, was among the GI’s most esteemed contributions. This Switchboard was a volunteer-run mental health hotline specifically for the gay community [2]. At this time, there had been no such resource for queer people in the area, making it a matter of urgency to have this hotline available. The number for the Switchboard came to be added to Urbana’s News-Gazette after representatives of the organization stressed its importance to local newspapers [3]. Additionally, they opened a Gay Resource Center in the University’s YWCA lounge by the end of 1975, where educational materials on sexuality were available to be checked out [4].

In addition to providing resources for queer students, the newly renamed Gay and Lesbian Illini advocated for an amendment to the University’s non-discrimination policy that would provide civil rights protections to queer students on campus, beginning in 1983. After two rejections from Chancellor Thomas Everhart, GLI responded with protests, including a sit-in in the Chancellor’s office. This response prompted Everhart to appoint a task force in 1986 to investigate the climate of queer student life and discrimination on campus [5]. By 1987, University policy began to change in favor of GLI’s goals.

The story of GLI’s fight for non-discrimination, visibility, and education, although important to the University’s history of civil rights, is only one aspect of LGBT life on campus and in Champaign-Urbana. Before and since their founding, queer students have existed and come together, and continue to do so today. To learn more about LGBT life on campus, The Office of Lesbian, Gay, Bisexual and Transgender Concerns Papers (RS 41/2/46) contains documentation of the history of queer student presence and activism. Joyce D. Meyer’s Papers (RS 41/20/271) additionally provides insight into Lesbian activism through the 1970s-1980s. Moreover, local newsletters like People Like Us and OUTpostings (RS 41/66/815; RS 41/66/816) are resources that provide insight into local queer culture and organization since the 1980s.

The first-wave of feminism in the United States focused on overturning legal obstacles to gender equality. It concentrated on issues like voting rights and property rights. The second-wave of feminism is agreed to have lasted from the 1960s until the 1980s. During these two decades of activism, people fought for a variety of issues that revolved around sexuality, reproductive rights, work life, family life, and gender-based inequalities. It should be noted that the second-wave of feminism has been criticized as not inclusive to the issues of women of color/working class and poor women.

The Joyce D. Meyers Papers, 1961-2018 (RS 41/20/271) reflect the life and activism of Meyers, who attended UIUC in the 1970s, protested for the Equal Rights Amendment, and became the first openly LGBTQ candidate to run for Champaign City Council.

The Paula Treichler Papers, 1970-1998 (RS 52/5/21) reflect Professor Treichler’s work, correspondence, papers, and clippings regarding issues such the Campus Affairs Committee on Women’s Concerns, child care, women’s studies, and the Committee on the Status of Women.

A search through the Student Organizations Publications, 1871- (RS 41/6/840) may be fruitful, as it contains copies of student org docs and announcements. For example, Box 1 contains info on the Abortion Rights Coalition and the Allies for a Women’s Center.

To position the expectations of women on campus leading into and during second-wave feminism, peruse Illini Wise 1944, 1946, 1949-60 (RS 41/3/810). To further situate how women and their interests were viewed, check out Editorial Office News for Women, 1948- (RS 8/3/861). These weekly news releases focused on “news of general interest to women” and homemaking. 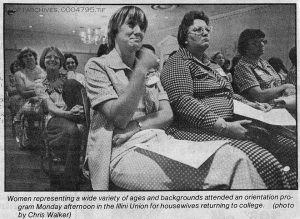 As always, the Daily Illini is an excellent resource to keyword search for topics such as feminism, abortion, Title IX, the Equal Rights Amendment, and women’s liberation. (Make sure to limit the years of your search!)

The SLC has a plethora of material regarding women’s history throughout the second-wave of feminism, as does the University Archives at the Main Library. Start here but contact an archivist if you have any questions! 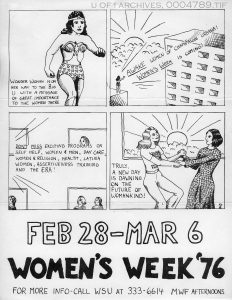 Pauline Chiang was the first female Chinese student to attend UIUC. She joined the College of Commerce (now the Gies College of Business) in 1922. This is 16 years after the first male Chinese students began studying at the university. In a Daily Illini feature, Chiang said, “I am perfectly satisfied at the University of Illinois,” and further stated, “In my home in Pekin, I heard of Illinois, and my friends in this country directed me here. It is a wonderful place.” 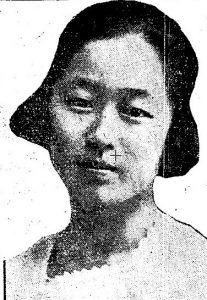 Upon her arrival Chiang, lived at McKinley Hall and became active in the Freshman Commission, the Woman’s Cosmopolitan Club, and at the Trinity Methodist Episcopal Church. Chiang also associated with the Chinese Students’ Club and took the part of a princess in “The Philosopher’s Stone,” a play that the club wrote and produced in 1923. (Details about the Chinese Students’ Club building can be found here.)

Chiang spoke up about issues of world education and race while at UIUC. A Daily Illini article from 1923 features Chiang’s thoughts on the 1922 silent drama East Meets West, a movie that starred a white woman in yellowface and heavily featured stereotypes about Chinese people. Chiang said, “I never saw Chinese girls with false teeth, as so described. I never saw Chinese dressed the way the picture describes.” She goes on to say, “It is the pride of the nation that I am fighting for.” 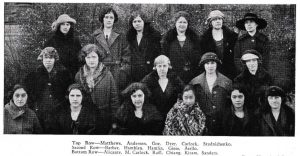 Pauline Chiang is listed in the 1922 Local Faculty and Student Directory. In September of 1923, Pauline Chiang married a fellow student, Herbert C. Euyang. She then appears in the 1923 Local Faculty and Staff Directory as “Mrs. H.C. Euyang.” She is not found by either name in any subsequent directories. Herbert Euyang graduated in 1924 and took a job in Chicago at an importing firm, and this may account for Pauline leaving UIUC’s campus.

For more information on the early years of Chinese students studying at UIUC, check out our Illini Everywhere blog series which discusses Chinese students from 1917-1927 and from 1928-1948.

The University of Illinois at Urbana-Champaign held its first classes in March of 1868. Two years later, women were allowed to attend classes. The early days of the university coincided with the battle for women’s suffrage. Women in Illinois wouldn’t secure the right to vote for another 45 years (1913). It would take another seven years before the Nineteenth Amendment was fully ratified ensuring, “The right of citizens of the United States to vote shall not be denied or abridged by the United States or by any State on account of sex.”

Women’s suffrage is a part of the the first-wave of feminism in the United States. Concerns of first-wave feminism included women’s right to vote in all elections, women’s bodies not being considered as their husband’s property, and women attaining equal contract and property rights. This first-wave of feminism began on 1848 with the first women’s rights convention, the Seneca Falls Gathering, and ended with the adoption of the Nineteenth Amendment in 1920.

Gathered here is a good starting point in examining first-wave feminism as experienced by UIUC students. These materials connect to themes of feminism, suffrage, and the view of women on campus. 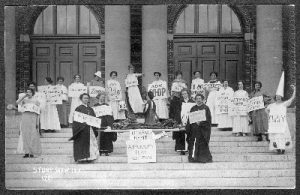 The Alethenai Society (RS 41/75/2) was a literary society for women founded in 1871. The above Alethenai Stunt photo (ID 0002367) depicts the society dressed for women’s rights as part of the May Fete Stunt Show. 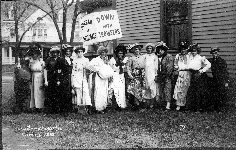 Board of Trustees Meetings Biennial Reports, 1867-2011, are available as digital surrogates (ID 8a02d470-9299-0131-1105-0050569601ca-8). The August 26, 1870 meeting discusses allowing females to apply in the upcoming school year stating, “…be it Resolved, That the Regent and faculty be authorized to admit to the classes of this institution for instruction, such female students of proper qualifications, as may apply; provided they be first satisfied that the parents and guardians have provided for them proper homes.” The names of Ayes (5) and Noes (4) are recorded for the resolution.

The early years of the Score Club (RS 48/3/7) reflect a focus on women’s suffrage in addition to an interest in music.

Researchers can keyword search digitized versions of the Daily Illini to ascertain the student reaction to and events about to women’s suffrage. The earliest Daily Illini appearance of the term “suffrage” appears in the May 1, 1879 edition in an article titled, “Woman’s Rights; Their Opposition, Development and Effects.” There are 448 mentions of the term “suffrage” between 1870 – 1921. Searching in that date range for terms such as “female,” “women,” “ladies,” “lady,” and other related terms also may prove helpful. Researchers can also expand this search past the Daily Illini to Champaign-Urbana or Illinois newspapers.

Note: This is a starting points for women’s suffrage resources held within the Student Life and Culture Archives. The SLC has a large amount of materials on women’s personal history at UIUC – from scrapbooks to photos to papers. Contact an archivist if you have questions about record series on early women who were students, teachers, and administrators at UIUC.

On November 13, 1909, at the St. Paul Coal Company mine in Cherry, Illinois, a devastating fire trapped 300 miners, of which 259 workers, including U.S. citizens, immigrants, and children would perish. Meanwhile on campus, Illinois staff would respond to the disaster while international students raised money to help support the families of miners lost in the catastrophe.

Read on to learn more about Illinois rescue and relief fund work responses to the Cherry Mine Disaster.

END_OF_DOCUMENT_TOKEN_TO_BE_REPLACED

One hundred and ten years ago, today, might have been the first soccer match at the University of Illinois, which was later followed by a variety of future teams who would organize on campus, bringing together citizens, immigrants, international students, residents, and the local community too.

Read on to learn more about the early soccer at the University of Illinois!

END_OF_DOCUMENT_TOKEN_TO_BE_REPLACED

During much of his political career, Theodore Roosevelt was an in demand speaker and after multiple invitations he came to central Illinois too. In fact, Illinois students played an early role in the efforts to bring the leading American statesman to town. Read on to learn more!

END_OF_DOCUMENT_TOKEN_TO_BE_REPLACED

Read on to learn more about early Japanese Illini!

END_OF_DOCUMENT_TOKEN_TO_BE_REPLACED

When Illinois Industrial University first opened, the entirety of the University was located in one building. The building served every need of the university as classrooms and office space, as well as a dormitory for the students.

Vincent P. Bunce attended the Illinois Industrial University from 1869 to 1871. Letters from his family shed light on student life in the earliest years of the University. Bunce, who lived in the dormitories of University Hall, received most of his school supplies, clothing, and food through the mail. Student mail was addressed to I.I.U.[1]

END_OF_DOCUMENT_TOKEN_TO_BE_REPLACED

Read on to learn more about early Sikh Illini!