Can’t wait for March Madness to begin? Neither could we, so we decided to make our own March Madness bracket! But instead of picking college basketball teams, we decided to pick materials in our own collections and we’ll have the fans (you!) vote to advance them to the next round.

We selected major players from our collections and divided them into four divisions. Each division represents a strong holding area in our library. Some of our players are old favorites while others are hidden gems. But how did we narrow it down and land on these items? We asked our colleagues for their expertise, of course! After that, we ended up with a list of sixteen stars from our collection. Now it’s up to the fans to decide who the champion will be…

Here’s our starting line-up. Read more about them below! 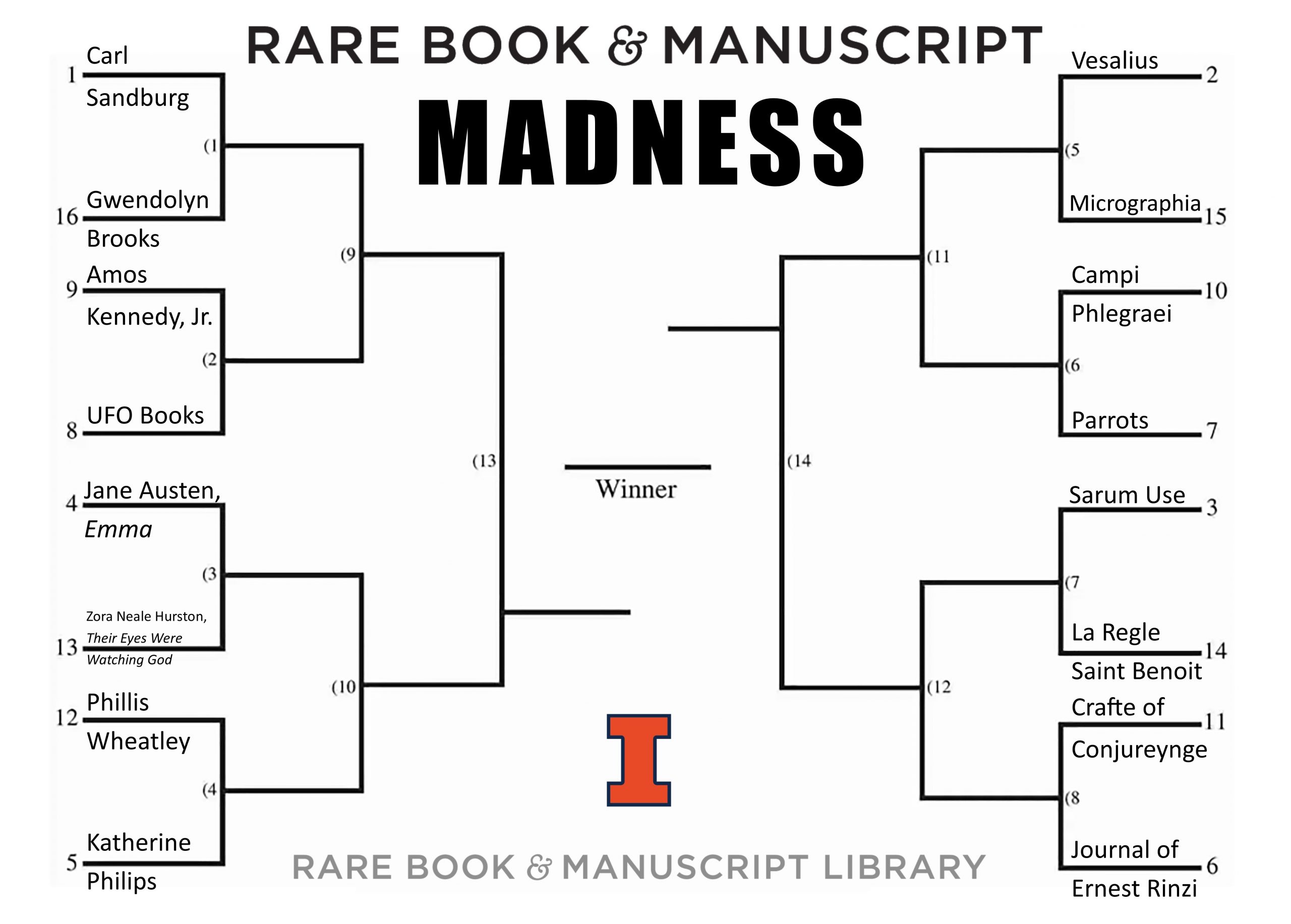 Voting will start on March 9th, but for now, let’s take a closer look at your 2020 RBML March Madness line up…

Carl Sandburg – Stereograph (ELIMINATED IN ROUND 1)

Before becoming a well known poet and author, Carl Sandburg spent four years selling stereographs from door to door.  Stereographs use two almost identical photographs to create a three-dimensional image when viewed through a stereoscope. The Keystone View Company produced this stereograph of the Union Stock Yards as part of a multi-volume set consisting of roughly 300 images. Each stereograph also included a brief description of the image including the coordinates for the image’s location. When looking at this stereograph through a stereoscope, viewers would see cattle in the stockyards Sandburg wrote about in “Chicago.”

Have you ever opened up social media and been confronted with a cringe-worthy memory? Maybe it’s an embarrassing picture or a status update that makes you realize just how differently you see things today. In 1997, Gwendolyn Brooks seems to have had a similar experience when she reread some of her poetry from 1936, a year during which she was evidently “magnificently acquainted” with misery. One example is “Nothing Matters” — a poem which could easily have been adopted by an emo band in the early 2000s. Brooks’ 1997 corrections clearly reflect her evolution in thought from a young adult to later in life. Her signature word, “Bunk,” appears at the top of the page in red ink, indicating her later disagreement with the poem’s sentiment. Brooks’ willingness to revisit this emotional period with frankness and humor makes “Nothing Matters” a slam dunk winner in the Archives category.

Amos Paul Kennedy, Jr. is a Detroit-based letterpress printer and book artist who often uses his work to express social and political commentary. This artist book by Kennedy, Jr. is a model made as the draft of an installation piece which honors the Black churches burned in the South in 1995. The piece consists of a wooden church covered with charred excerpts from the Bible with a technique similar to decoupage. Removing the roof of the church reveals a charred King James Bible inside. With its still perceptible scent of ashes, Kennedy, Jr.’s “Church Box with Burned Bible” evokes a truly sensory experience. As the artist book not only commemorates the church burnings but also celebrates the survival of these Black communities, it is a clear front-runner in the Archives category.

UFO Scrapbook (ELIMINATED IN ROUND 2)

Acquired in 1989, this large scrapbook concerns unidentified flying objects and other mysteries. The book contains 21 pages of color photographs and 74 pages of newspaper clippings dated from the 1960s and 1970s. More mysterious than the content of this scrapbook, however, is the condition that it is in. The photographs, and especially the newspaper clippings, are in remarkably good condition for their age and acid content. Don’t sleep on this scrapbook- it tends to be the fan favorite whenever visitor’s get a chance to look at it!

Jane Austen – Emma (ELIMINATED IN ROUND 1)

Emma is the fourth novel written by Jane Austen and it took a little over a year for her to write.  The novel was ultimately printed on commission. Austen paid for the advertising and the first print run of 2,000 copies herself after declining John Murray’s offer of £450 for Emma, Sense and Sensibility, and Mansfield Park.  Austen did not expect people to like her protagonist, stating at one point, “I’m going to take a heroine whom no one but myself will much like,” but both the novel and the character of Emma were well received by the critics of Austen’s life time and audiences today.  All of Austen’s novels were published anonymously and her name did not appear on her work until after her death. Will Emma be as big of a success on the court as it was with readers?

Philips was a poet, translator, and woman of letters in seventeenth-century England. Writing at the same time as John Milton, she was also his antithesis in that she was a staunch Royalist who supported the crown during the Long Parliament and the period of the English Civil War. During her lifetime her poetry was incredibly popular but only appeared in print without permission; after her death in 1664, this authorized collection of her poetry appeared, and was much more popular than the works of the newly disgraced Milton. Will Philips defeat this competition with as much grace as she did with Milton?

Phillis Wheatley – Poems on Various Subjects (ELIMINATED IN ROUND 2)

Wheatley is identified as the first African-American poet and the first African-American to make her living through her writing. Born in West Africa, she was enslaved as a child, but subsequently freed after the publication of this book amid popular acclaim and recognition of her literary talents: to many, her art was proof of her humanity as well as the inherent injustice of slavery as an institution. Her work was republished repeatedly in abolitionist literature, and is now considered the foundation of African-American literature.

Published in 1937, Their Eyes Were Watching God is perhaps Hurston’s best known works in the present era.  Trained as an anthropologist and folklorist at Barnard College under Franz Boas, Hurston spent most of her professional career studying and promoting the study of black culture.  She traveled extensively for her work, most notably to Haiti and Jamaica for her study of African diaspora religions. Their Eyes Were Watching God was inspired by her work in the field and falls at the beginning of a three year period where in she published the three works that marked the high point of her career.

De humani corporis fabrica libri septem is one of the most significant anatomy books in the history of science. The text deviated from the teachings of Galen, a Roman physician, in order to promote a more hands-on approach to learning anatomy and subsequently learning how to be a physician. Vesalius also altered the format of anatomical drawings by drawing the human form in artistic poses and placing them in scenic landscapes.

Robert Hooke – Micrographia: or Some Physiological Descriptions of Minute Bodies Made by Magnifying Glasses… (ELIMINATED IN ROUND 1)

Robert Hooke’s Micrographia: or Some Physiological Descriptions of Minute Bodies Made by Magnifying Glasses. With Observations and Inquiries Thereupon is a seminal scientific work in various regards, which include containing the earliest illustrations of many insects under magnification and being the first use of the word “cell” to describe biological units. It is significant to the history of printing for being the first major publication by the Royal Society. Micrographia is most famous for its depictions of living specimens under magnification, but Hooke also observed other items such as razor blades, needles, and snow crystals. In addition to his microscopic observations, Hooke also included philosophical and scientific observations about planets and fossils.

Latin for “fields of fire,” “Campi Phlegraei” is one of the most celebrated and beautiful books on Mount Vesuvius by Sir William Hamilton. Published in 1779, this book contains beautiful hand painted illustrations of the eruptions of Mount Vesuvius volcano between throughout the 1760s and 1770s.  One of the illustrations of the Bay of Naples became one of the most famous postcard views, and the image was reproduced numerous times. In addition to being visually stunning, Hamilton’s book was also scientifically significant. Hamilton provided close observations along with detailed empirical data about the volcano became the first serious systematic set of observations of the volcano.

Edward Lear – Illustrations of the family of Psittacidae, or parrots… (ELIMINATED IN ROUND 1)

Edward Lear is more commonly known for his literary nonsense in his poetry, more specifically in his limericks. In addition to being a writer and poet, Lear was also an artist and illustrator. His first book was “Illustrations of the Family of Psittacidae, or Parrots” published in 1832, and contained 42 lithographs with original hand painting. Lear began work on his illustrations in 1830, when he was only 18 years old. Lear visited the London Zoo, as well as some private collections, to paint the parrots live.

La regle saint Benoit or, The Rule of Saint Benedict, is a 13th century manuscript that laid out the rules of interaction between inhabitants of monasteries. This particular copy is especially important because it is almost certainly written for a female Benedictine community. The historiated initial on the first page depicts Saint Benedict preaching to a group of nuns and there are vows from a 15th century nun pasted onto one of the pages.

Catholic Church – Book of Hours: Sarum Use (ELIMINATED IN ROUND 2)

Books of Hours are devotional texts that were owned by individuals, predominantly women, who wanted a more devout approach to their daily worship. The text was modeled after the monastic lifestyle and contained liturgical readings for each of the canonical hours. This particular example features the Sarum Use as well as beautiful illuminations and illustrations. It is written in a Gothic book hand and includes decorated borders with flowers and leaves, illuminated initials, and vibrant yellows, reds, and greens.

Crafte Of Conjureynge… is a manuscript from the late 16th century that features seven diagrams drawn in ink – consisting mostly of pentagrams and circles. This text is particularly interesting because it discusses astrological material, but it also mentions Christian saints and Jesus Christ. It provides a fascinating glimpse of spirituality and magic in conversation with Christian topics.

Written in the years 1898-1903, the journal of Ernest Rinzi is not your usual journal. Rinzi was a miniaturist and jeweler, and was a member of the Society of Miniature Painters. He put his miniature skills to the test in this journal, writing so small that a magnifying glass is needed to see the writing clearly. If the size didn’t make the journal difficult enough to read, the journal is written in a code invented by Rinzi himself. The code appears to blend Greek letters, signs borrowed from Chinese characters or from astrology, and some of his own unique inventions. Some of the larger text in the journal has been cracked, but a majority of the journal, written in miniature characters, is still unknown.

Big thank you to Dr. Cait Coker, Taylor Fisk, Katie Hartmann, Ruthann Miller, and Jensen Rehn for their contributions on some of these items!