While updating the catalogue record for an 1869 edition of Dickens’s A Christmas Carol, I came across a letter inside the front cover. Dated 3 April 1867, it was written from Andrew Varick Stout Anthony (1835-1906) to Alexander Farnum (1830-1884) regarding William James Linton (1812-1897), an English engraver who had recently immigrated to the United States. Farnum was a Providence, Rhode Island, book collector and engraving aficionado, whose library has been described as one of “extraordinary excellence, sumptuous character and superb condition.”

The illustrations in the book were drawn by Solomon Eytinge, junior (1833-1905), and engraved by A.V.S. Anthony himself. As a book collector ever aware of matters of provenance and association, no doubt Farnum, upon acquiring the volume and remembering his correspondence with Anthony, pasted the letter into the book so as to preserve this connection. 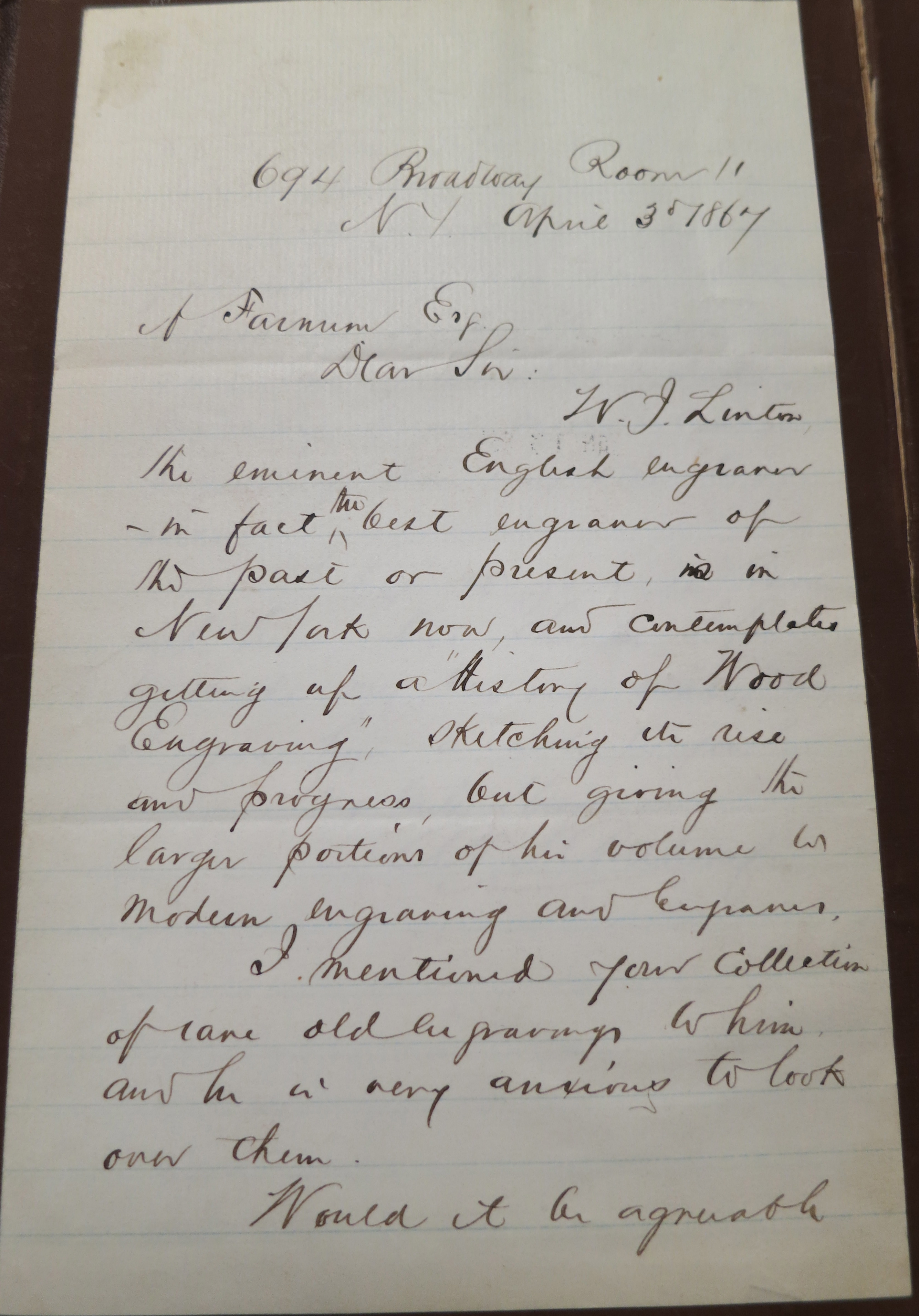 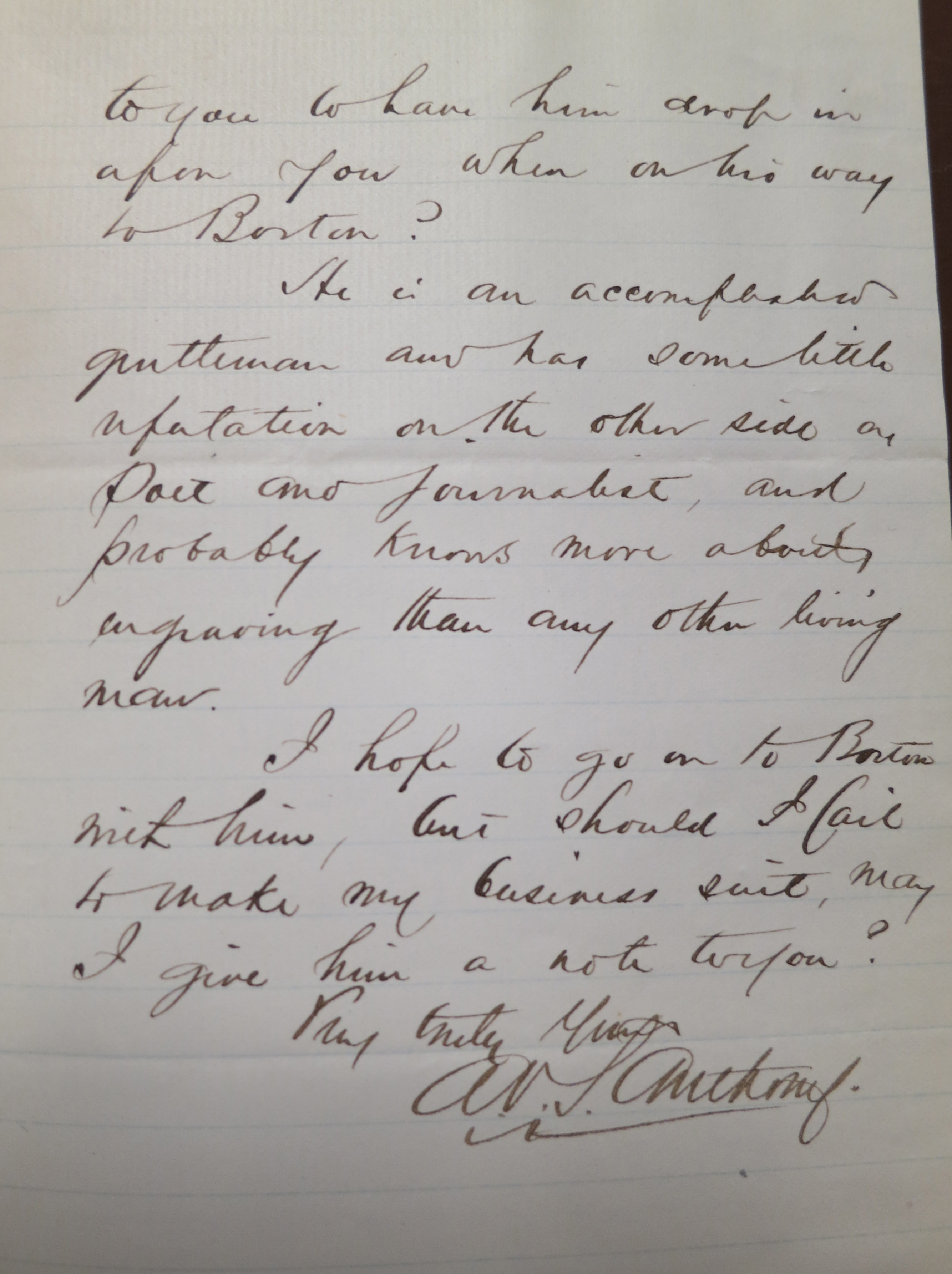 W.J. Linton, the eminent English engraver – in fact the best engraver of the past or present, is in New York now, and contemplates getting up a “History of Wood Engraving,” sketching its rise and progress, but giving the larger portions of his volume to modern engraving and Engravers.

I mentioned your collection of rare old engravings to him and he is very anxious to look over them.

Would it be agreeable to you to have him drop in upon you when on his way to Boston?

He is an accomplished gentleman and has some little [infatuation?] on the other side as Poet and Journalist, and probably knows more about engraving than any other living man.

I hope to go on to Boston with him, but should I fail to make my business suit, may I give him a note to you?

In 1882, Linton’s A History of Wood-Engraving in America was published in Boston and London.

Upon Farnum’s death, his collection was auctioned off by George A. Leavitt & Co. from the 9th to the 11th of June 1884. The sale was held at their headquarters at Clinton Hall (formerly the Astor Opera House) on Astor Place in Manhattan, also home to the New York Mercantile Library. Interestingly, Astor Place is only a few blocks from the location on Broadway where Anthony had written to Farnum 17 years earlier. Something of the atmosphere of this auction is surely conveyed in Spanish painter Ignacio de León y Escosura’s canvas, “Auction Sale in Clinton Hall, New York, 1876.” The building was razed in 1890 and replaced by an 11-story construction also called Clinton Hall, which stands to this day.

The catalogue of the Farnum sale naturally spoke very highly of its offerings: “Of such a class are the lots in this catalogue that the compiler honestly believes that instead of the necessity of American bibliopolists […] going to Europe of purchase from the English booksellers with whom they deal, all would find it in their best interests this Summer to buy from the Farnum Library, in Clinton Hall – books which, although printed in this century, are daily becoming of greater rarity in the old country over the sea.”

One thought on “A Christmas Carol and Its Corresponding Collector”