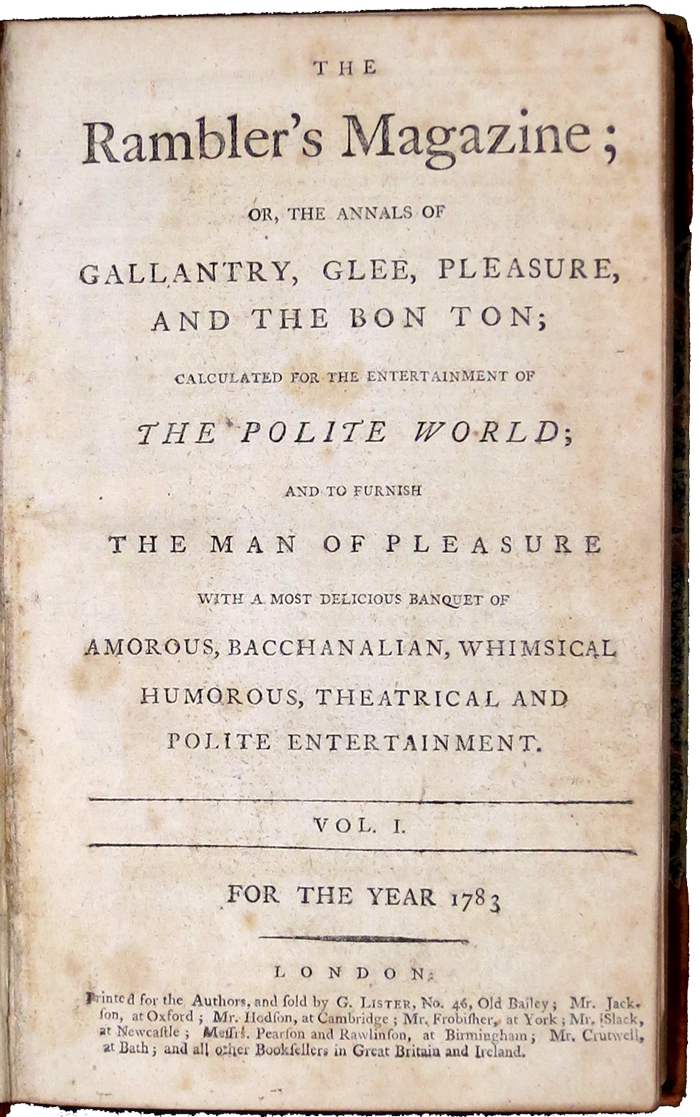 The rambler’s magazine, or, The annals of gallantry, glee, pleasure and the bon ton. London: Printed for the authors, and sold by G. Lister, no. 46, Old Bailey; Mr. Jackson, at Oxford; Mr. Hodson, at Cambridge; Mr. Frobisher, at York; Mr. Slack, at Newcastle; Messrs. Peason and Rawlinson, at Birmingham; Mr. Crutwell, at Bath; and all other booksellers in Great Britain and Ireland, [1783-1791]

I recently cataloged an eight-volume set of The Rambler’s Magazine, or, The Annals of Gallantry, Glee, Pleasure, and the Bon Ton (not to be confused with Samuel Johnson’s The Rambler), which was published from 1784 to 1791. The magazine’s publishers boast that it is “calculated for the entertainment of the polite world, and to furnish the man of pleasure with a most delicious banquet of amorous, bacchanalian, whimsical, humorous, theatrical and polite entertainment.” The issues appeared monthly, with a supplement at the end of the year, and were each around 40 pages. These pages were packed to the gills with lectures, anecdotes, letters, poems, theatrical vignettes, songs, and general gossip — all of a very lowbrow nature. The Rambler’s Magazine is a true predecessor of those unavoidable tabloid publications that are to be found at nearly every supermarket checkout today. The lewdness of the content is often echoed in the accompanying engravings, which bear such humorous and suggestive titles as “Lady C—e preparing to be refreshed by Mr N—y” or “Abelard studying the use of Eloisa’s Globes.”

At times, the subject matter aims at the intellectual, discussing and illustrating contemporary political events (the general election of 1784) or scientific advancements (the hot air balloon pioneers Gustavus Katterfelto and the Montgolfier brothers), but always from a satirical and sensationalist point-of-view. 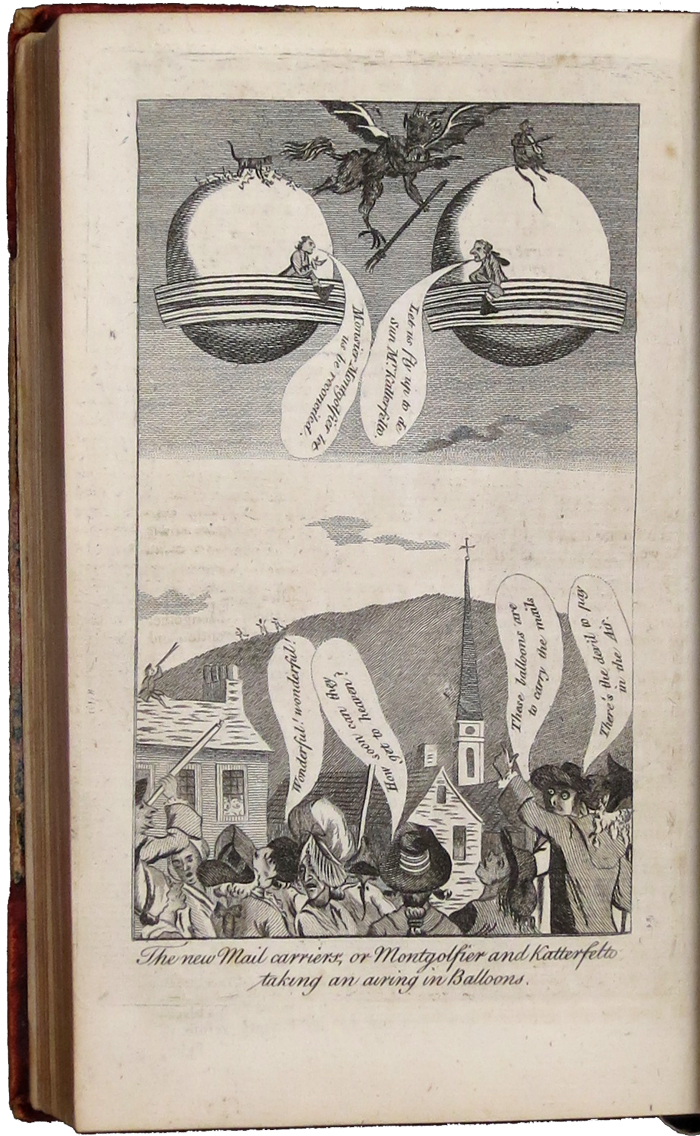 I looked in depth at the first four volumes, collecting some the most notable headlines and columns to share with readers of Non Solus. Memorable headlines include:

“Dissertation upon beards and whiskers” [June 1784]

“Capt. Cook cured of the Rheumatism, in the Otaheitean mode, by friction” [September 1784]

“The history and adventures of a bedstead” [December 1784]

“On the necessary qualifications for lying, with illustratory specimens” [December 1784]

In a March 1783 article entitled “A remarkable discovery; or, Mrs. General Washington, displayed in proper articles,” it is claimed that evidence was published in the Pennsylvania Gazette of 11 November 1782 revealing that the Revolutionary War hero and future president was “actually discovered to be of the FEMALE SEX.” The column is accompanied by an engraving showing a whip-wielding “Mrs. General Washington, Bestowing thirteen Stripes on Britania [sic].” Clearly some Britons were still sore about the recent events in the colonies.

Here are a few other anecdotes of note from The Rambler’s Magazine:

A Hint. If a certain old gentleman, not an hundred miles from Cavendish-square, would wish to make a secret of his frequent visits to a lady in the neighbourhood of Mortimer-street, he is advised not to leave his furious little terriers at the door, as the inscription upon their collars may lead to a discovery of an amour, which can be of no credit to a man of his age! [January 1783]

The inconveniencies attending large hoops are to be remedied, it is said, by constructing them with a sort of side wings, which yield upon resistance; but if the wings are made to give way so easily, pray what is to become of the middle? [February 1783]

Marriages in the Month of September, omitted by all the news-writers … 4. Mr. Flint to Miss Steel. N.B. As this is a striking couple, many sparks will, no doubt, be produced between them, by conjugal collision. [October 1783]

Bibliophiles will certainly derive a smile from the following letter to the editor from one “Lothario,” who claims that he has a copy of an interesting letter in his possession, which is then printed in full.

Epistle from a Bookbinder to a most enchanting subject.

I long to fold you in my arms, and to gather the honey from your ambrosial lips. I could fill whole pages in expatiating upon your perfections, and nothing can ever cancel my esteem for you! Oh, that I had you but in sheets! I would be bound to give you satisfaction; and, if any man should attempt to oppose our union, his eyes should instantaneously be sewed up, and his body put in boards at the undertakers. Though I am neither guilt [sic] nor lettered, I understand collating. I have stitched Mrs. Newton (her trial I mean) many an hundred times; and he ought to be bound in calf who could not enjoy such a subject. Perhaps, Madam, you may object to my size. I confess that I am rather diminutive, but, give me leave to observe to you, Madam, that a good octavo is better than a bad folio. A fine foolscap is superior to a coarse royal. If I should be so fortunate as to obtain you for a wife, you may depend upon being well covered, not with sheep or blue-paper, but elegantly in Morocco. Oh, if I had you upon the margin of a limpid stream! The contents of my purse shall ever be at your service; and you may rely upon my sincerity, for my tongue is always an index to my heart. You may probably have heard, that I have been connected with unbound subjects, but I am now determined to turn over a new leaf and put a finis to all my follies.

I am, my dearest Duodecimo,

Similar to our modern-day crossword puzzles, Sudoku, and other mental exercises so often found in popular print media, The Rambler’s Magazine regularly included rebuses and riddles for the entertainment of its readers. Below are two to try your hand at.

The first is a cryptologic puzzle from the February 1783 issue, which is a dedication to “the doctor himself,” purported author of a multi-part piece entitled, “An eccentric lecture on the art of propagating the human species, and producing a numerous and healthy offspring, &c.” Can you decipher it? 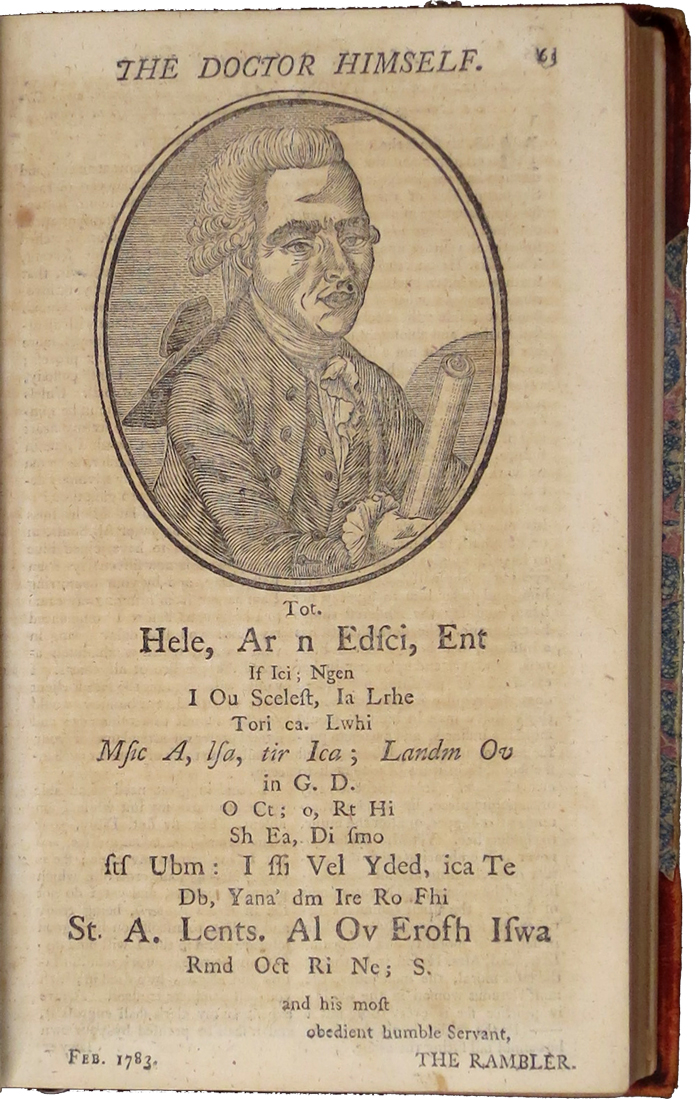 The second is a rebus from February 1786. While most of the objects which here signify letters, syllables, or whole words are recognizable by 21st-century readers, some are not so obvious. For some clues, see here. The solution can be found here. (Note: a fox was misplaced where a donkey should be in line six of the second page.) 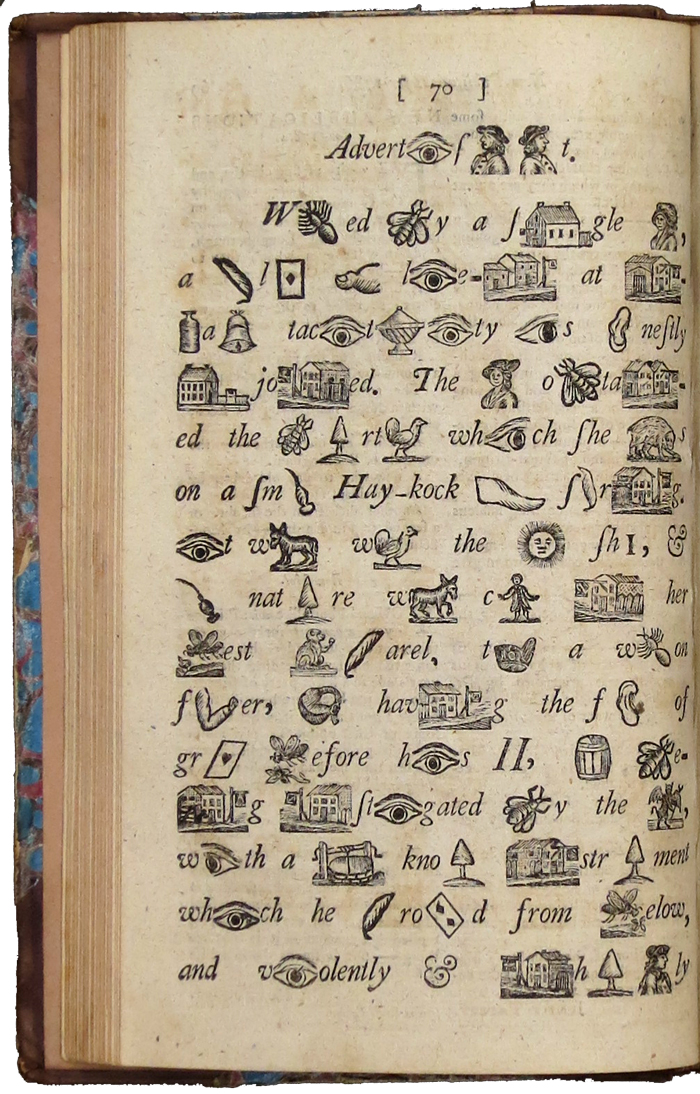 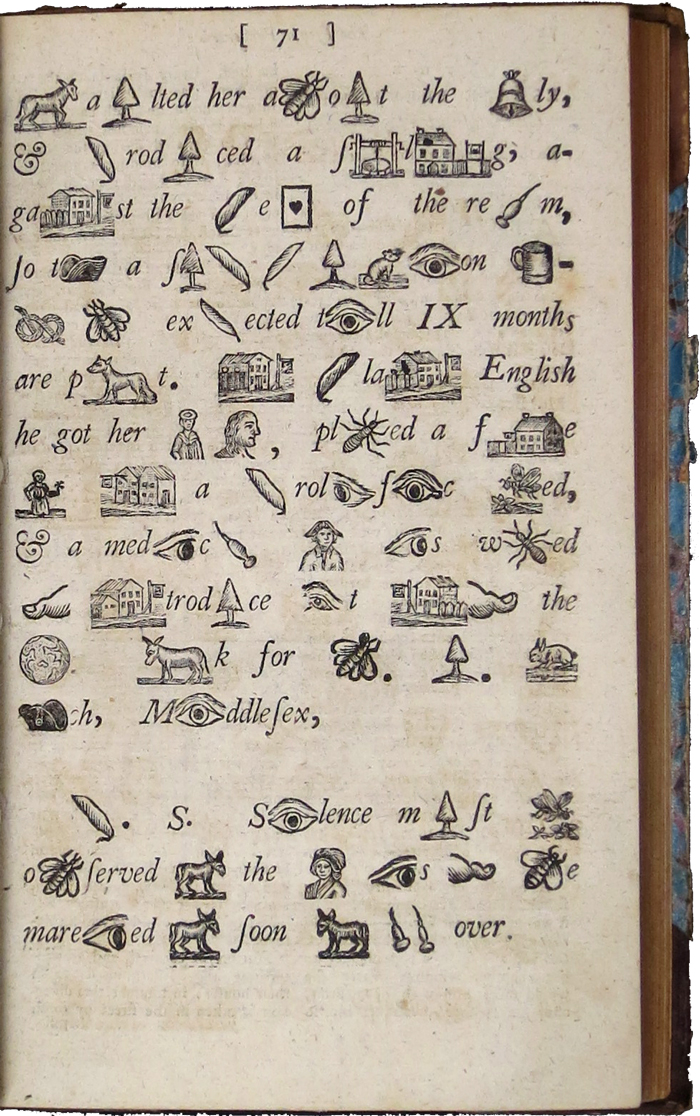 According to the British Library’s English Short Title Catalogue, this is the only copy of the run of these magazines in this country outside of Harvard University, though our copy is missing the January 1790 and February 1791 issues.

Volumes 3-8 bear the armorial bookplate of Sir Edward Denny Bacon (1860-1938), a famous British stamp collector and curator of the Royal Philatelic Collection. The Library’s copy was acquired from Hill in October 1961. TB 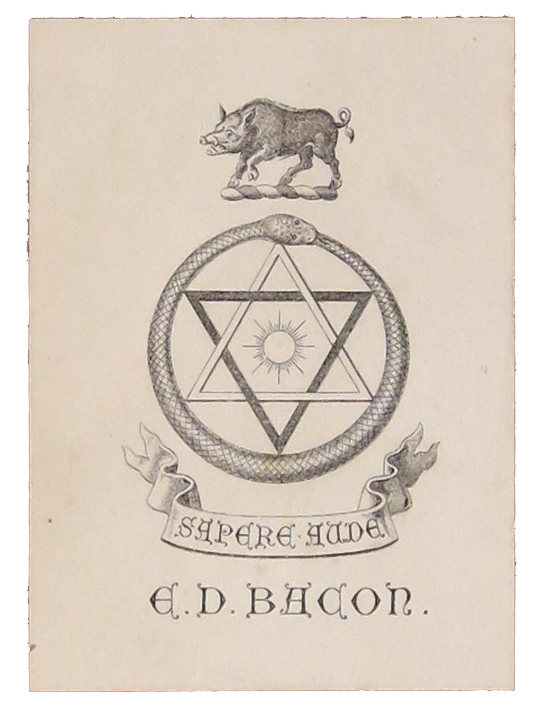 One thought on “The Rambler’s Magazine: A Puzzlingly Popular Periodical”