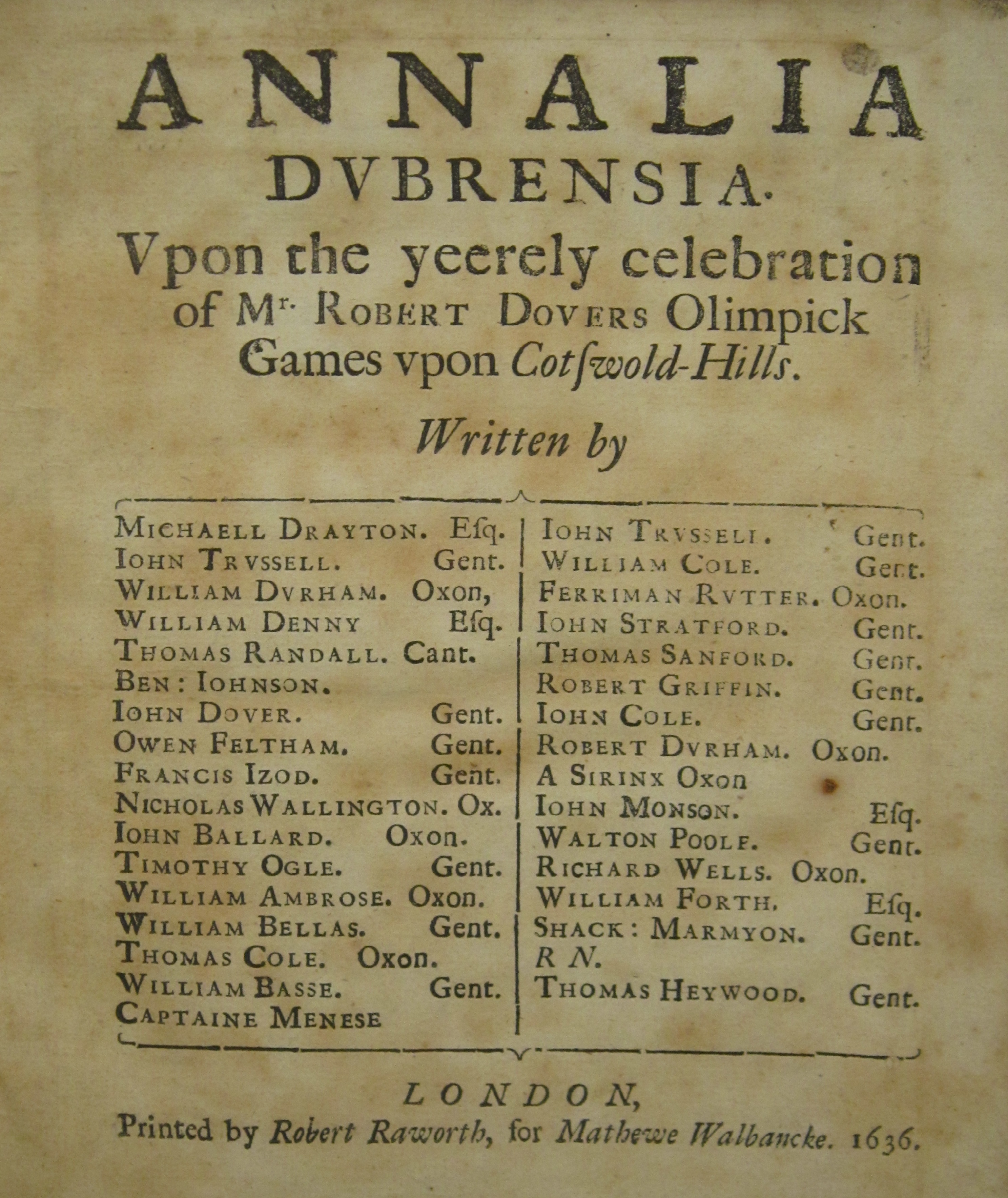 While working on a project to create detailed catalog records for items of interesting provenance, I came across an 18th-century type-facsimile of a charming collection of poetry from 1636 called the Annalia Dubrensia (“Annals of Dover”), one of only two documented copies in this country. The poems are dedicated to Robert Dover (1582-1652) and were contributed by more than thirty poets, among whom are such luminaries as Ben Jonson, Thomas Randolph, Michael Drayton, and Thomas Heywood. The volume includes a humble response in verse by Dover himself. An attorney and former scholar at King’s College, Cambridge, Dover is most famous as the founder, or more likely the resuscitator, of the Cotswold Games, a two-day sporting festival held in a valley (sometimes called a “natural amphitheater”) in the Cotswold Hills near Chipping Camden in Gloucestershire, England, starting around 1612. This was only one of many such regular events which are documented from this period, but it became distinguished under the management of Dover, who saw the rise of Puritanism in England as standing in opposition to the freer and more playful spirit which seemed to be in the nature of the English people. Dover believed that physical strength gained through exercise was necessary for the defense of the realm, but he also wished to unite rich and poor in a sporting atmosphere. The games were quite popular and received the approval of King James I. Some scholars believe that Shakespeare (who may have known Dover) makes reference to them in The Merry Wives of Windsor. 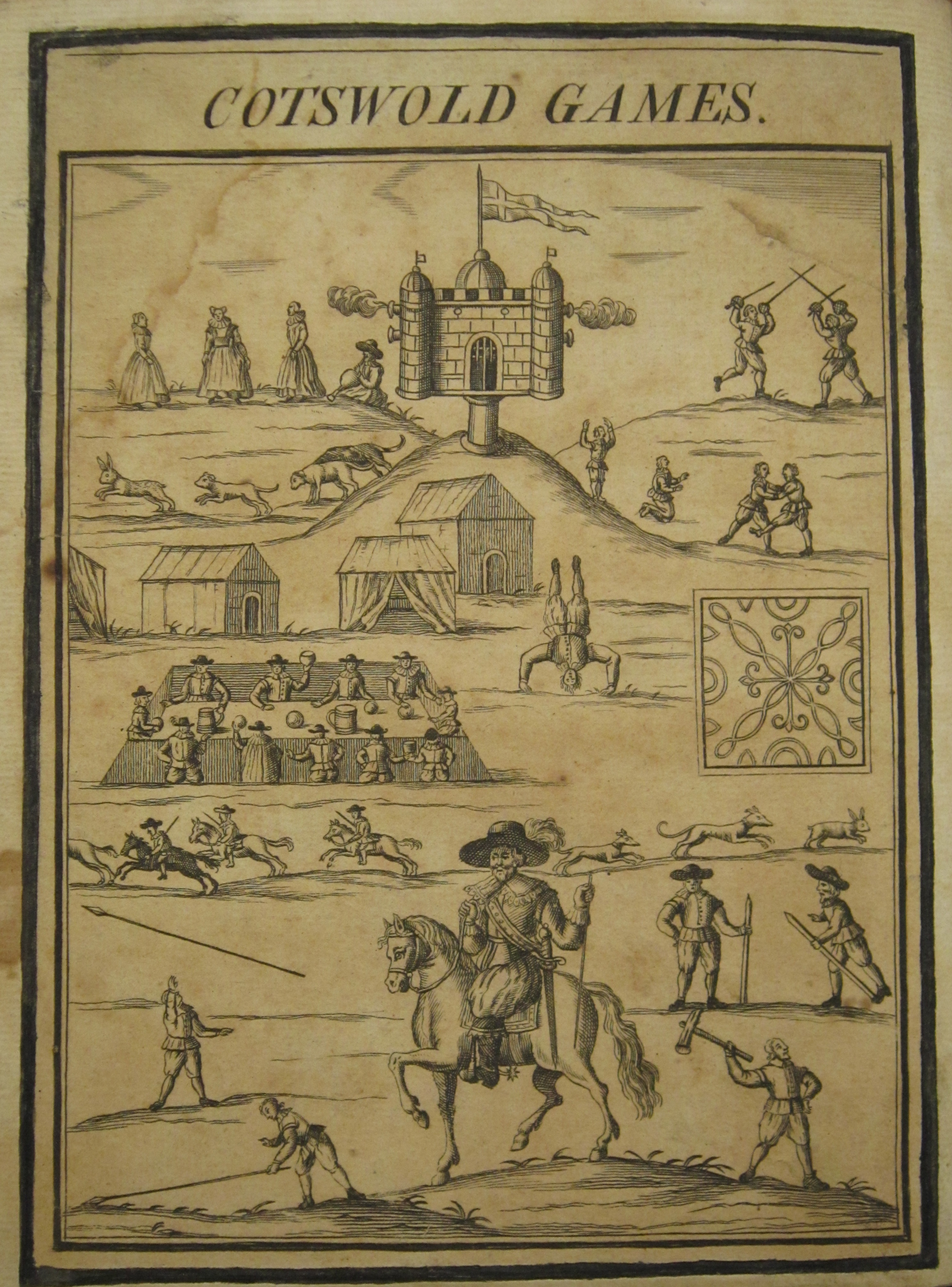 The frontispiece illustration from the 1636 edition reprinted in our copy shows an assortment of the activities which went on during the games. At middle-ground in the center of this woodcut is a curious edifice known as Dover Castle, a portable wooden structure balanced on a single pedestal, from which a standard bearing the motto “Heigh for Cotswold!” was flown and cannon were fired during the events. Across the landscape, participants are depicted engaged in several of the events, including sword fighting, wrestling, leaping, coursing with hounds, quarterstaff, casting the hammer, and spear throwing. One man even stands on his head. In the upper left-hand corner of the woodcut, three women in ruffs and long dresses dance, accompanied by a piper.

The games were as famous for their accommodations and refreshments as for their activitie. Poet Nicholas Wallington writes in this work that “None ever hungry from these games come home, / or ere made plaint of viands, or of roome.” At the foot of the hill on which the castle stood (or teetered) are tents set up for competitors, in front of which a group of men are having a meal at a long table. From the style of the illustration, it is hard to tell whether this party are seating on a mat or other covering on the ground as if at a picnic, or if a hole was dug into the ground, at the edge of which they sat enjoying their meal. The square ornamental device at the middle-right may be one of the yellow “ribbands” which Dover famously awarded to all participants. In the midst of all of this revelry and sport rides Dover himself, whose importance is indicated by his size in relation to the other figures. He is elaborately dressed in a feathered hat, ruff, coat, and boots which were a gift from King James out of his personal wardrobe.

Dover’s games continued annually, with the support of the Royal Family, until it was suppressed during the English Civil War in 1642. After the Restoration of the Monarchy in 1660, the games were revived and continued on and off until 1852. In 1966, they returned as a regular event under the patronage of the Robert Dover’s Games Society, and are still enacted today in the same location as the original games, near what has come to be called Dover’s Hill, featuring such popular events as shin-kicking and tug-of-war.

The rediscovery of this work in the vault of the Rare Book & Manuscript Library is a timely one, considering the start of the 2012 Olympics in late July. In fact, Dover’s Cotswold Games themselves came to be known as “Olimpick” – a term which was the product of the age’s renewed interest in Classical mythology and culture. The British Olympic Association has acknowledged these games as the “first stirrings” of the British Olympic heritage. Furthermore, it seems that the first Cotswold Games celebrated under Dover’s administration were probably held in June, 1612, exactly 400 years ago. Sources say that the Games took place on the Thursday and Friday after Whitsunday (a traditional name for the festival of Pentecost), which is the seventh Sunday after Easter. This would place the date of the inaugural games on the 14th and 15th of June, 1612. 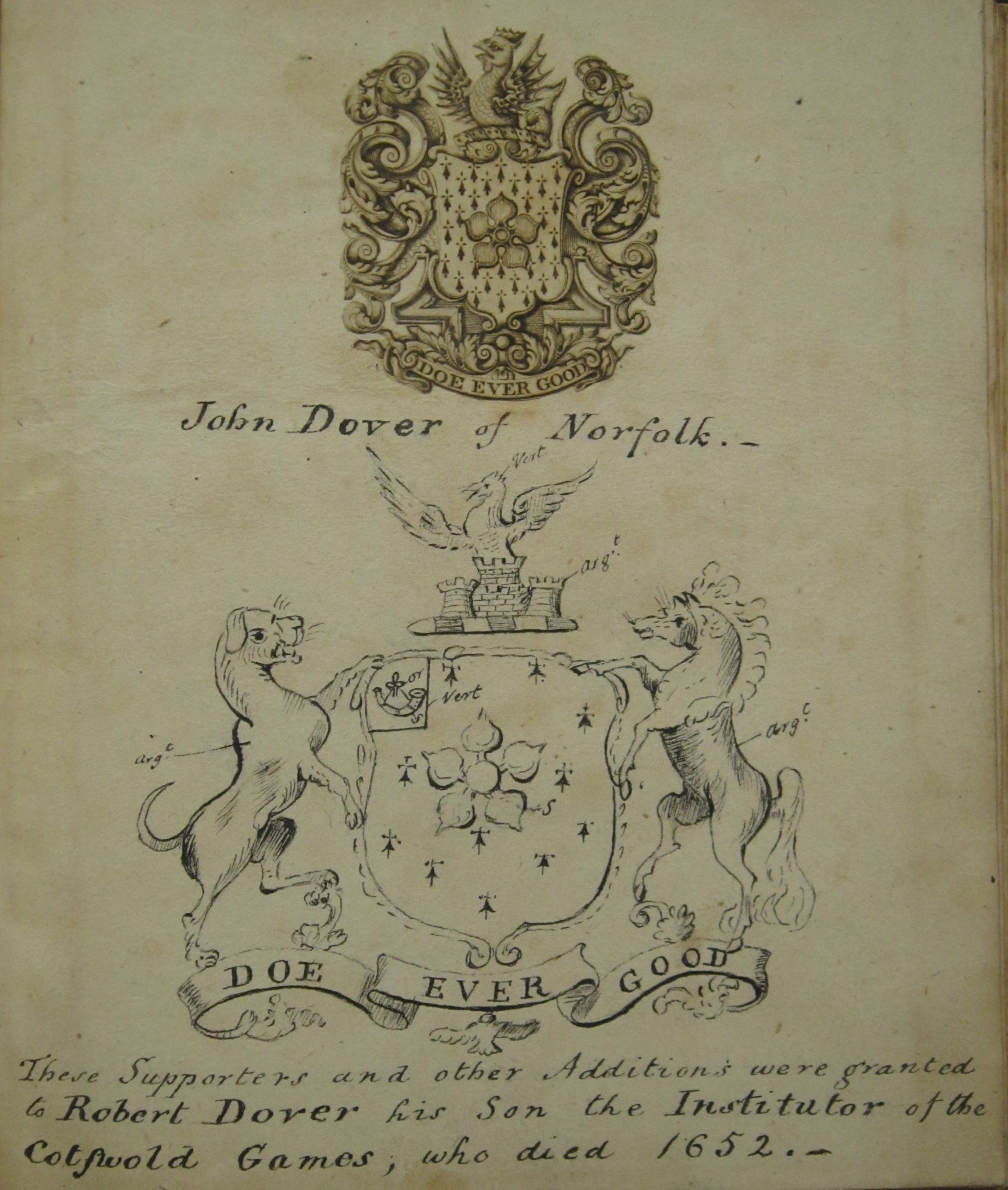 This circa 1720 edition of the Annalia Dubrensia is differentiated from the 1636 version by the addition of an anonymous poem and the inclusion of a note at the end of the dedicatory epistle on leaf A2 verso, stating that this new edition was undertaken because “Dr. Dover [i.e. John Dover, d. 1725] thought it his Duty to perpetuate the Memory of that Good Man his Grandfather.” An armorial bookplate, with the motto “Do ever good,” was pasted onto one of the fly-leaves, with the name of Dover’s father, John Dover of Norfolk, written in what may be a nineteenth-century hand. Below this is a coat-of-arms incorporating the above crest, drawn in pen and accompanied by notes in the same hand, indicating that “These Supporters and other Additions were granted to Robert Dover his Son the Institutor of the Cotswold Games, who died 1652.” It is believed that King James I himself may have been the grantor of these arms. A nineteenth- or early twentieth-century owner of this volume (perhaps Ernest E. Baker, F.S.A., whose bookplate appears on the front paste-down) pasted clippings and copied several quotations related to the games or the Annalia Dubrensia onto the rear fly-leaves. This copy was acquired by the Library in January of 1941. TB