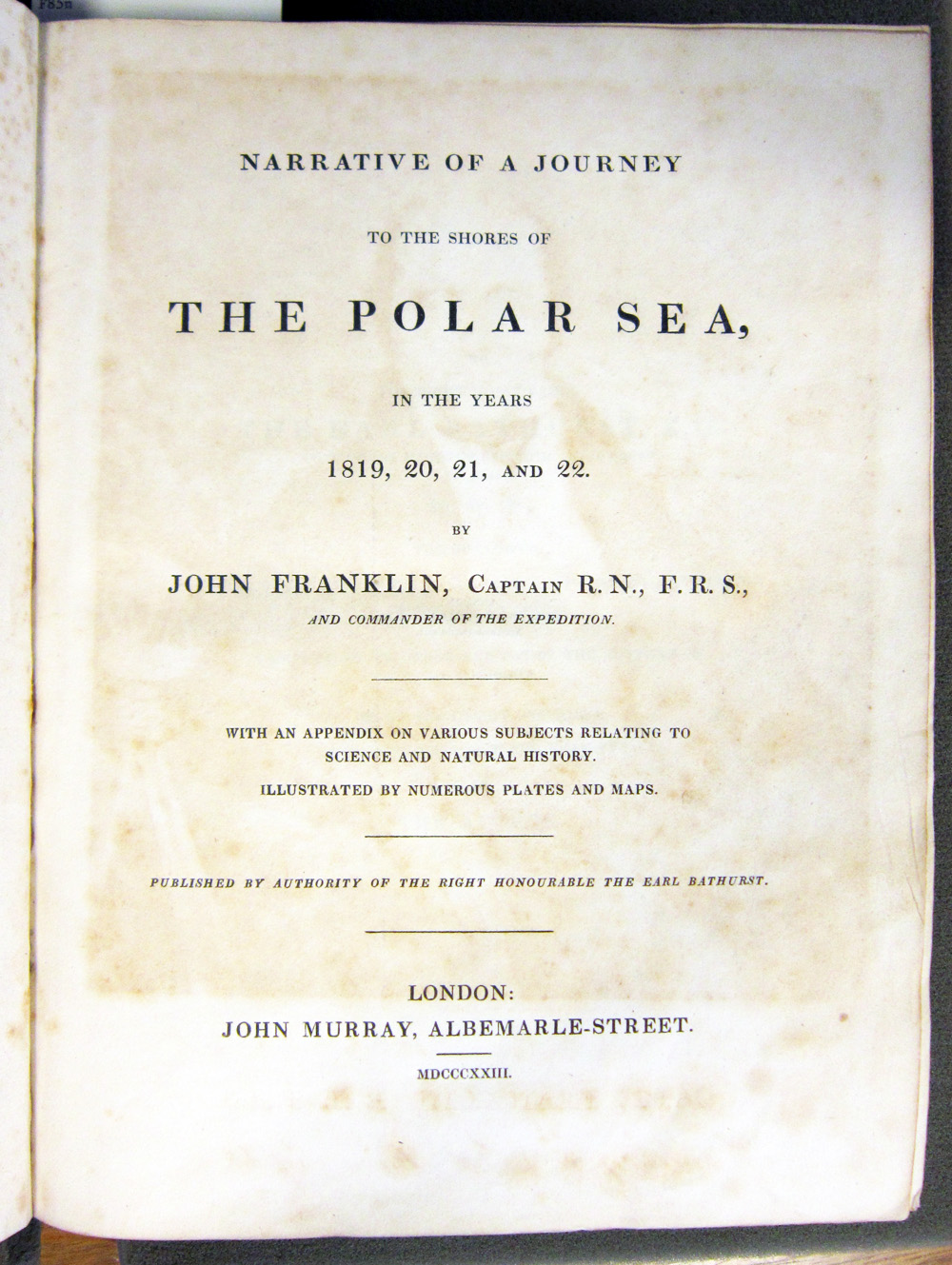 In 1966, the University of Illinois purchased a significant group of manuscripts and books from the personal collection of Sir John Richardson (1787-1855).  Richardson was a naturalist and surgeon who accompanied Sir John Franklin on his overland Arctic expeditions of 1819-22 and 1825-27.  When it became apparent that something had gone wrong with Franklin’s final Arctic voyage, Richardson and John Rae led an unsuccessful search expedition in 1848-49.  The Rare Book & Manuscript Library holds the manuscript account book of this expedition (Post-1650 MS 51)

One book that was acquired from Richardson’s library is a presentation copy of Franklin’s account of his first Arctic expedition.  This presentation copy is inscribed by Franklin to Mrs. Richardson on the half-title page.  Additionally, there is an added frontispiece, consisting of an engraving entitled: “Capt[ai]n Franklin, R.N., F.R.S., commander of the Land Arctic Expedition with Fort Enterprise in the background,” which was drawn by G.B. Lewis, engraved by F.C. Lewis, and published for G. Lewis, by Hurst & Robinson on 1 January 1824.  This engraving is also signed by John Franklin and dated 23 January 1824. 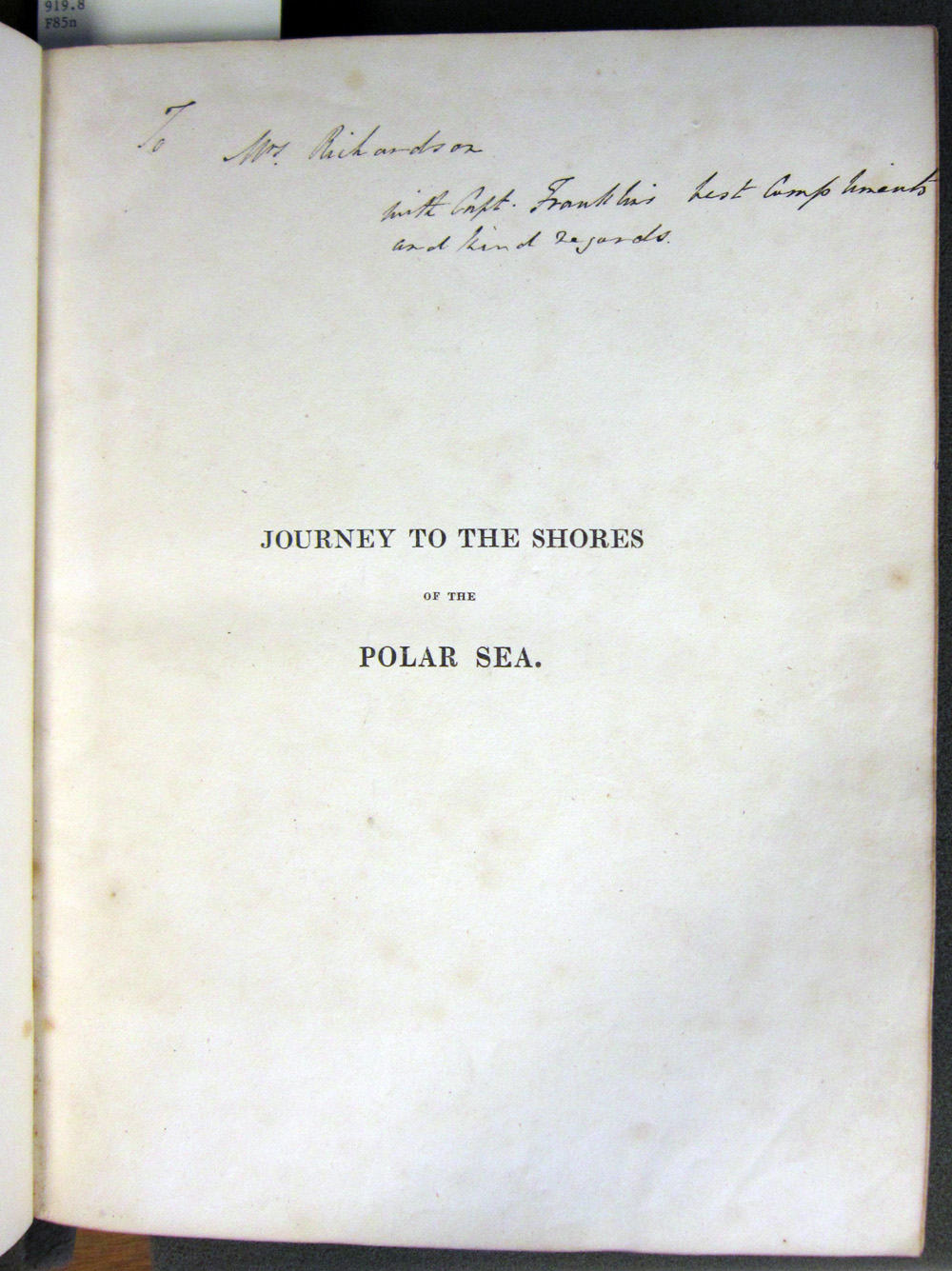 Both of these aspects of the book make it an interesting and important association copy, but there is a further feature which makes it a significant document in the history of Arctic exploration.  In a single sentence of a 1969 bibliography of Sir John Richardson’s printed works that appeared in The Journal of the Society for the Bibliography of Natural History, Richardson’s biographer and University of Illinois physiology professor Robert Eugene Johnson briefly mentions a poem written by Franklin in this book.  This poem, which appears to be otherwise unrecorded and unpublished, consists of 10 stanzas of humorous verse that describe Franklin’s difficulty in writing and fear of critics.  Although certainly no work of poetic genius, the poem serves to add depth to the character of Sir John Franklin. 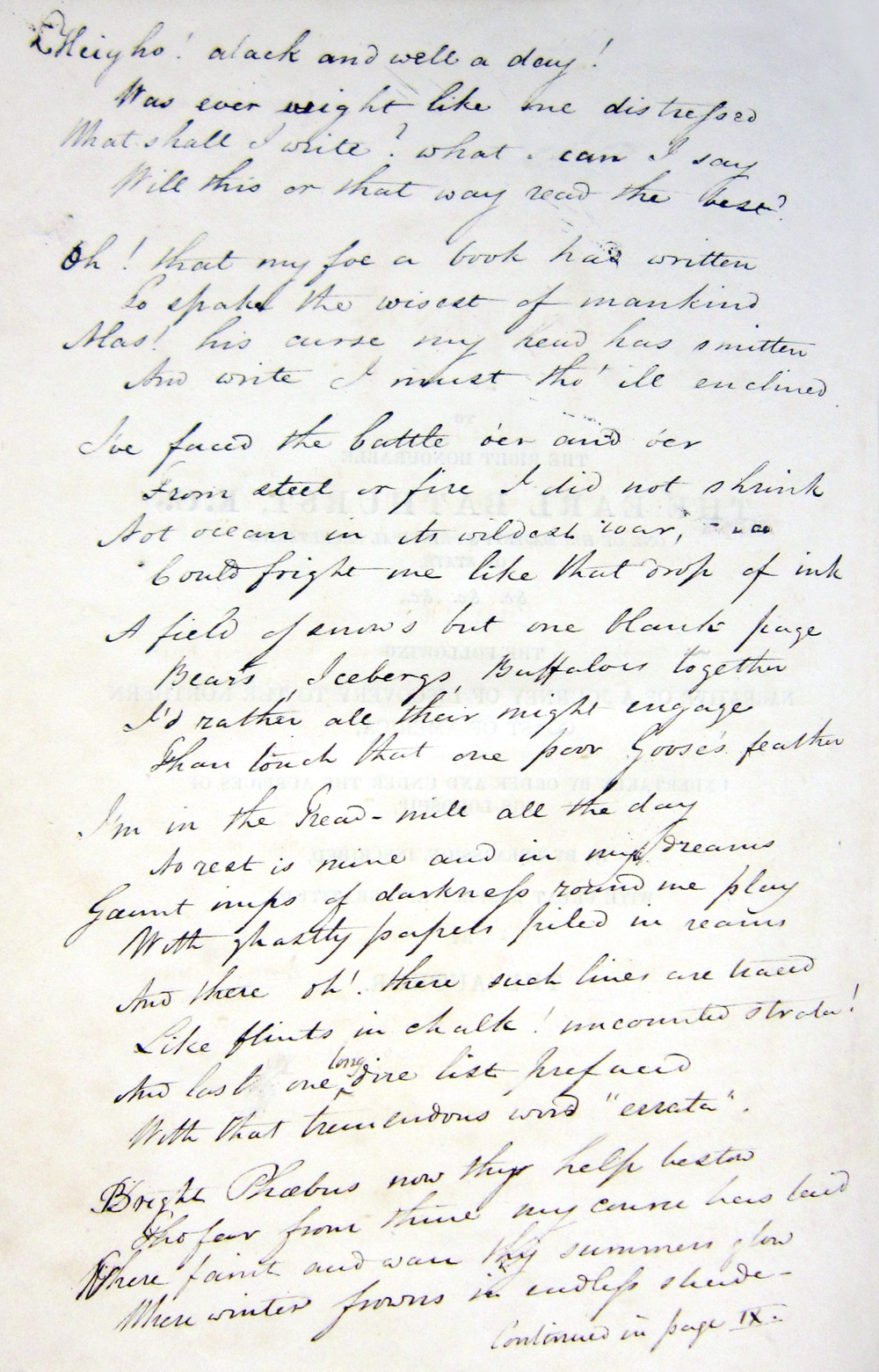 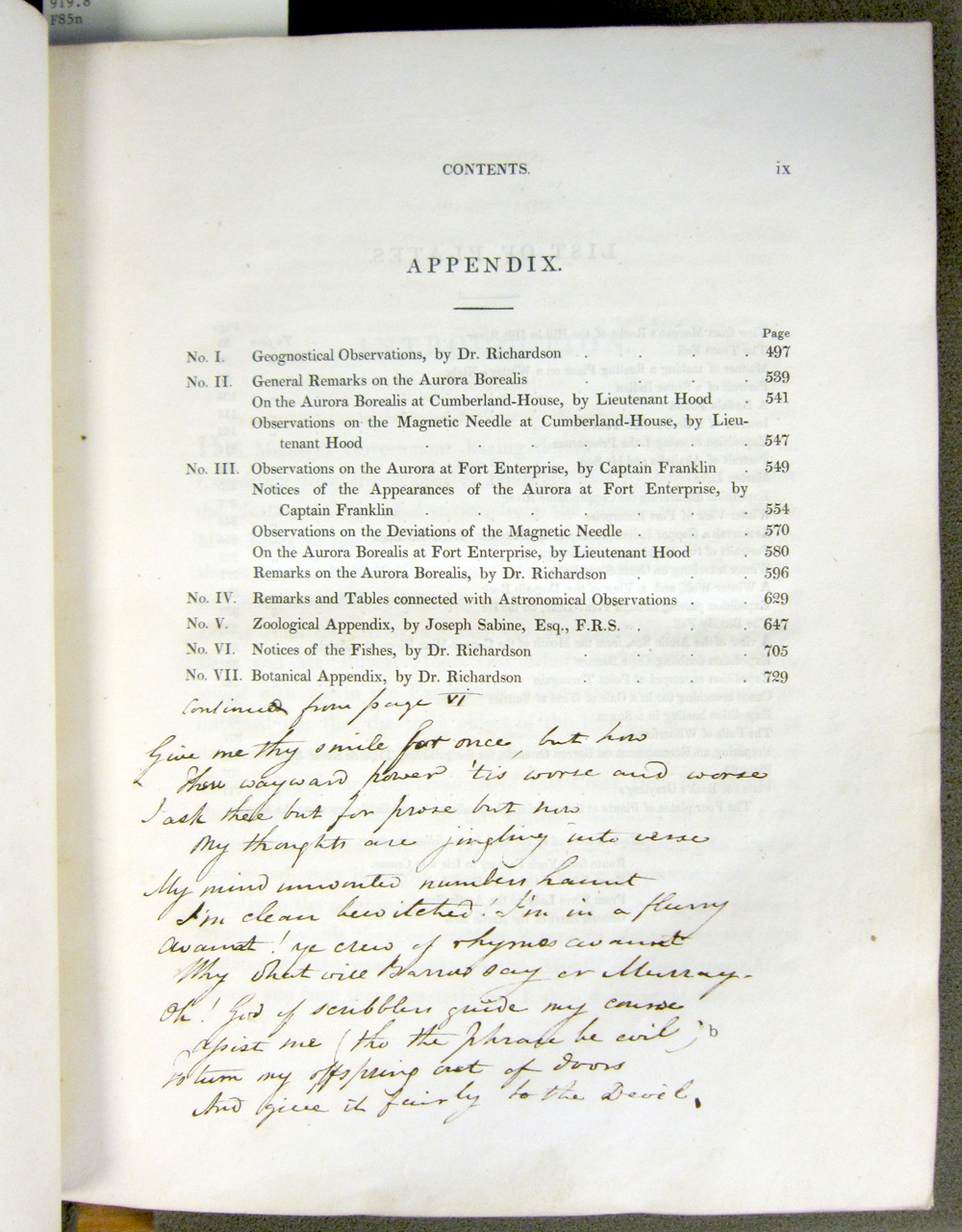 This book and other highlights from the Rare Book & Manuscript Library’s collections will be displayed in April 2013, when an exhibition on polar exploration will be held to commemorate the hundredth anniversary of the Crocker Land Expedition (1913-17), an Arctic expedition sponsored in part by the University of Illinois.  Until then, here are photographs of the book and a transcription of the poem. My thanks to Richard Noble for his help with the transcription. AD

What shall I write? What can I say

Will this or that way read the best?

Oh! that my foe a book had written

So spake the wisest of mankind

Alas! his curse my head has smitten

And write I must tho ill enclined.

From steel or fire I did not shrink

Not ocean in its wildest roar,

A field of snow’s but one blank page

Than touch that one poor Goose’s feather

I’m in the tread-mill all the day

No rest is mine and in my dreams

Gaunt imps of darkness round me play

With ghastly papers filed in reams

And there oh! there such lines are traced

With that tremendous word “errata”.

Tho fear from thine my course has laid

Where faint and wan thy summers glow

Where winter frowns in endless shade

Give me thy smile for once, but how

I ask thee but for prose but now

My thoughts are jingling into verse

Why what will Barrow say or Murray

Assist me (tho the phrase be evil)

To turn my offspring out of doors

And give it fairly to the Devil.

One thought on “Unpublished Poem by Sir John Franklin on the Difficulties of Writing (Q. 919.8 F85n)”