The Rare Book & Manuscript Library’s copy of Petrus Comester’s Historia scholastica (1473) is one of several books the Library owns from the private collection of Gilbert R. Redgrave.  Gilbert Richard Redgrave (1844-1941) is known primarily to the book world as the editor, with A.W. Pollard, of A Short Title Catalogue of English Books, 1475-1640, also referred to as the STC. However, Redgrave was a man with many varied interests and talents.  As the son of painter Richard Redgrave, Gilbert was also interested in art and published several monographs on the subject.  He was an architect as well as an engineer and published a well-regarded technical study of cement. Redgrave served as an important administrator in the technical education system in Great Britain for many years.  For a more detailed account of Redgrave’s life and achievements see his obituary in The Times of 17 June 1941, p.9.

It was common for Redgrave to write long, learned bibliographical notes on the front fly-leaves of books in his library and this book is no exception.  In his note, Redgrave calls attention to this copy’s excellent state of preservation and the craftsmanship of its printer, Günther Zainer. Redgrave remarks that, “among my various possessions in old books there is none which I more proudly write my name.” Below is a full transcription of his note:

This magnificent work by Günther Zainer of Reuthingen, who was the first printer at Augsburg, and worked there as early as 1468, has, I think, scarcely received its due share of attention at the hands of book-lovers. It would seem from Panzer to have been the third work printed in Germany in Roman type*. Zainer having produced the 1st and 2nd works in the previous year (1472) to the publication of the present volume.

It is a very early example of a book paged throughout with Roman numerals on both sides of the pages.

Panzer makes no mention of the two blanks at the end of the volume and is in error as to the number of pages (he says 224) but he is corrected by Brunet (220). This copy has 222 ff.

There was an edition in 1472 of the New Testament portion of this work at Utrecht by N. Ketelaer and G. de Leempt, the earliest work with a date from that press, but this would appear to be the 1st edition of Comestor’s History. The work was often reprinted before the close of the XV century and it was alas translated into French as a “bible”!

Among my various possessions in old books there is none which I more proudly write my name, Anno Domini 1886.

But for a few trifling worm-holes, this work is as perfect as the day it was printed 413 years ago. G.R.R.

On the verso of the last blank folio is a statement that it was to be given, after the owner’s death, to a “Library”? This paraphrase of the Holy Scriptures by Peter the Glutton, was widely regarded in the Dark Ages as the actual bible. G.R.

I think the interlacing I on fol. I is printed from a block.

Redgrave also pasted in a notice he wrote about the book for The British Bookmaker, October 1890, p. 8:

Following in the footsteps of Schoeffer, and taking for his models the usual types of illuminated capitals, came Günther Zainer of Reutlingen, who was the earliest printer of Augsburg, where he set up his press in 1468. He used at first a very beautiful and large gothic type, somewhat resembling that of Gutenberg, but as early as 1472 he supplied himself with Roman characters and printed two works by Isidorus, which are stated by Panzer to be the first books printed in Germany in Roman type. In the following year he issued a complete edition of Comestor’s “Historia Scholastica,” a sort of paraphrase of the bible, and this work is enriched with some hundreds of woodcut, or, as some have thought soft metal, initial letters, evidently intended to be hand-coloured. The initials are in two different sizes, the larger ones, at the beginning of each book, are eight lines in depth, and the smaller ones are three lines deep. There are many different varieties of each letter, and even the large capitals, of which there are twenty-one, are all different. We have reproduced one of these initials, the S on the verso of page 30, which, in our copy of the History, has escaped the notice of the illuminator. It will serve to show how entirely the designer has been guided by the work of the missal-painter, whose art his outlines are intended only to supplement.

The initial “S” mentioned in this notice is reproduced below, as well as Redgrave’s distinctive bookplate from the front paste-down, and the book’s first leaf, showing the distinct woodcut “I”. AD 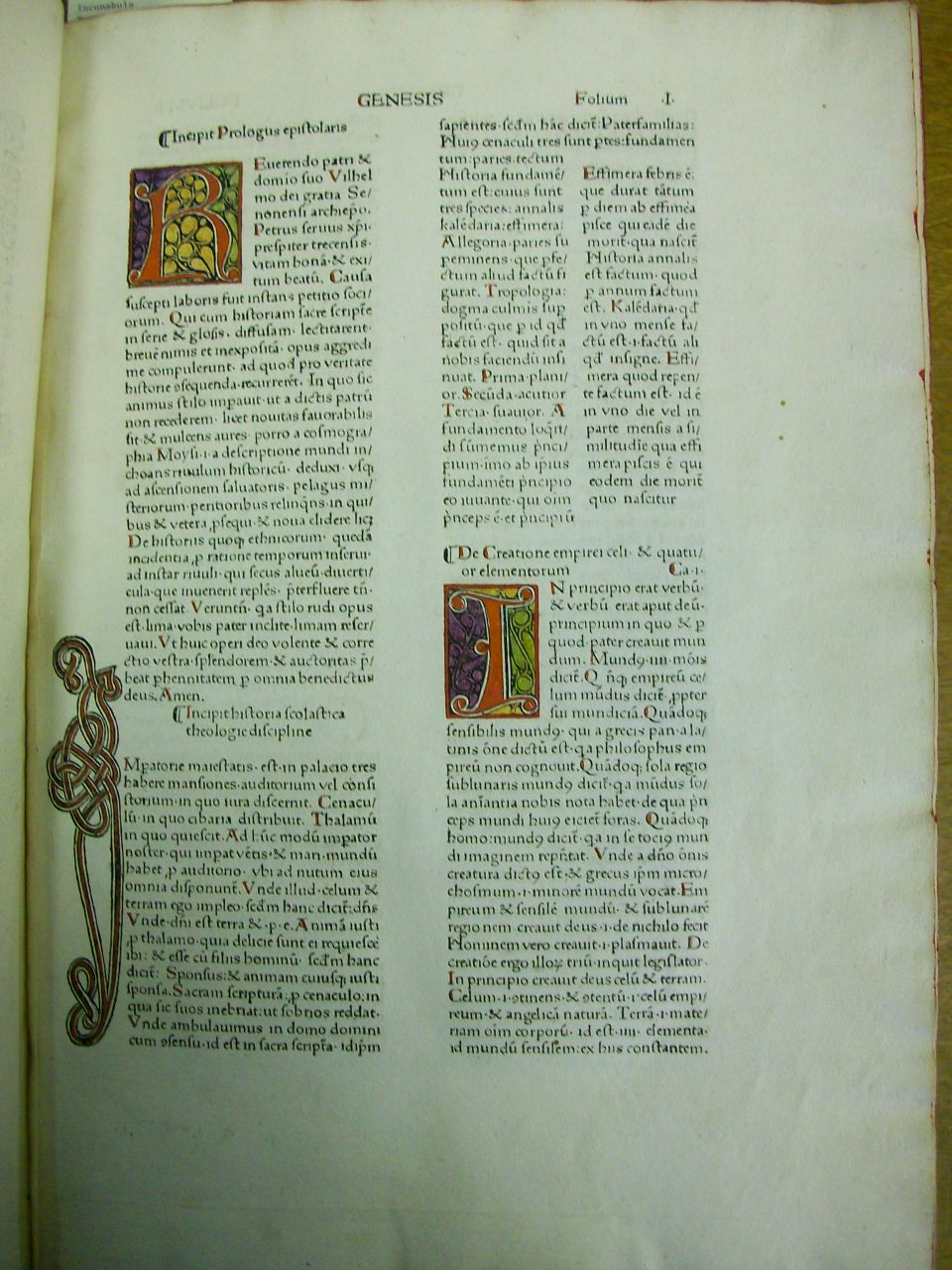