A handwritten letter from around 1690 that has long been in the uncataloged area of The Rare Book & Manuscript Library has recently been cataloged. Though known to curators in the past, cataloger Brandy Parris came upon it again and brought it to our attention. It gives us a peek at the underbelly of 17th-century life in London. The petition has now been properly cataloged by Cataloging Project Manager Christopher D. Cook, who offers the transcription below. Cook explains that the document was purchased by the University in August 1942, and has been mostly forgotten since it was displayed in DeLloyd J. Guths 1982 exhibition, Law Lives in the Library: Anglo-American Legal Books and Manuscripts.

N.B.: Abbreviations have been expanded and spellings have been modernized:

To the honorable the Bench of Justices
sitting at Hicks Hall

The humble petition of William Andrews––

And the petitioner shall ever pray, etc.
The following remark on the reverse of the document tells us that the petition was a success: 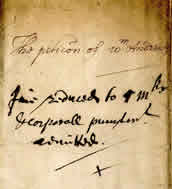