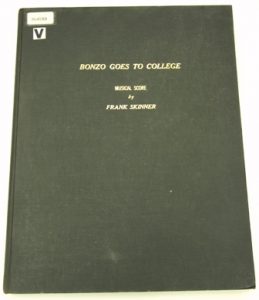 >Donation included several hundred scores, recordings, and books. Published materials and commercial recordings (many of which were unrelated to Skinner) have been cataloged and integrated into existing Music and Performing Arts Library collections, or dispersed among uncataloged holdings in storage.
83 film scores (typically condensed conductor scores in black-line or diazo reproduction, with cue sheets affixed inside front covers) are bound and cataloged in the M1527s, shelved in MPAL Special Collections.
A file folder (labeled “Son of Frankenstein”, but including mostly miscellaneous items unrelated to that motion picture) contains approximately one-half inch of clippings, as well as two sheets of music manuscript, in pencil, entitled “Old Timer”.
A personal scrapbook compiled by Skinner includes programs and clippings from the period of 1937-1941 [46 leaves, q.780.923 Sk3451].
A group of privately-produced 78-rpm records of Skinner’s works (43 10-inch discs, presently grouped within 10 albums) includes performances of significant portions of Saboteur, Spring Parade, House of the Seven Gables, Arabian Nights, and Back Street, as well as individual selections from numerous other motion pictures.

Cataloged items and scores designated with accession numbers may be located via the online catalog. A list of donated materials (dated November 1969) (see below) is filed in a Collections File folder (“Skinner, Al”) This folder also contains David Spangler’s 1995 inventory of privately-produced recordings, along with a selective discography of Skinner’s commercial releases (see below); copies of the Feigenblatt and Wright articles cited below; obituary of Al Skinner; a legal document and correspondence relating to the donation; and correspondence with several individuals who have utilized these materials since their deposit at the University of Illinois.  LP and 78-rpm recordings in storage may be retrieved via accession number or via alphabetic arrangement by manufacturer/serial number; however, please expect limited access.