Slovene bibliography begins in 1561 when the first bibliography of printed Slovene books was published in Tübingen, but the first attempt at a national bibliography had to wait until 1868 when Slovenska matica began the regular publication of Letopis Matice Slovenske. Bibliographies appeared in this serial from 1868-1898. From 1898-1906 Zbornik Matice Slovenske took over the printing of the bibliographies. The earlier years were not fully satisfactory, but the quality of the bibliographies improved by the end of the 19th century. There were other short-lived attempts at establishing a vigorous national bibliography for Slovenia, but it did not really take hold until 1945. Fortunately, some retrospective online bibliographies now cover some of the gap periods. For further reading on this topic see the article entitled “Bibliografija” in Enciklopedija Jugoslavije, volume 1 [U of I Library Call Number: International & Area Studies Yugoslav Reference (Slavic) 914.97 En16] and for a more current view Lidija Wagner’s “National Bibliographies on the Territory of the Former Yugoslavia with Particular Reference to Slovenian Bibliography” in Solanus, n.s. vol.10, 1996, pp.92-97. There is a section devoted to Slovene bibliography with several bibliographical references to other works of interest. A good summary of the history of publishing and current publishing practices in Slovenia is Michael Biggins’ articles “Publishing in Slovenia” and “Publishing in Yugoslavia’s Successor States“.

Bibliographies of the various academies of sciences and mathematics organizations are presented on the page for Monographic Bibliography for Former Yugoslavia.

The above link takes you to the online catalogs page of the National and University Library of Slovenia. The catalogs offered on this page are extensive and should be extremely helpful to anyone searching for Slovene publications. KatNUK is the online catalog of the National Library and contains more than half a million records for publications beginning with 1988. Vzajemni katalog (COBIB) is the union catalog or cooperative online catalogs of 269 libraries in Slovenia and contains over 2 million records.  Both catalogs include all types of publications: monographs, serials, nonbook materials, and, to a lesser extent, journal articles as well.

The web interface for KatNUK and Vzajemni katalog (COBIB) are available in both Slovene and English, but search results differ depending on whether you use Slovene fonts or not. These two online catalogs use the COBISS (Co-operative Online Bibliographic System and Services) system which has a familiar interface since many of the other East European libraries (in particular former Yugoslav libraries) use the same one.

Another catalog available at this site is the Bibliografije raziskovalcev which can be used to produce online bibliographies of Slovene authors. It is part of COBISS.si but has a different interface.  No diacritics are needed to search.

As of 2020, there were 919 Libraries in Slovenia that had joined COBISS. COLIB.SI contains databases from Slovenian libraries that participate in COBISS. It also contains materials in Slovenian libraries that participate in COBISS. Below is a record from COBISS for Slovenska bibliografija za Veliko Britanijo : 1. 1. 1945 – 1. 5. 2000.

The digital catalog portal for the Slovenian Bibliography has incorporated bibliographic records for books, periodicals, printed music scores, sound recordings, cartographic materials, pictorial materials, and articles. Each section is browsable by title and publication year. The entire bibliography is searchable. records are provided through the NUK catalog or through digitized bibliographies. Below is a record from the Slovenian Bibliography for Slovenska bibliografija za Veliko Britanijo : 1. 1. 1945 – 1. 5. 2000. 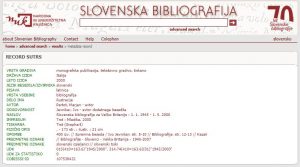 For Slovene books published between 1550-1900, this retrospective bibliography compiled by the noted bibliography Franc Simonic is extremely important. Entries are listed under author or if there is no author under the first significant word of the title. Authors from the newer age are listed under their surnames, but authors from older times are listed under their first names. For example, Alic, Juri vs. Tomaz Kempcan. There is no delineation of newer times or older times in the introduction to the bibliography, so try both surname and first name when using this source. It is not indexed otherwise, but good cross references are supplied for title words and for pseudonyms. There is a brief section of additions at the end of the book. Volume del, which was to be a periodical index, was never published. Additions may be found in the magazine of the Slovenian foundation: “Slovenska matica” v Ljubljani. Zbornik, 1906- . Note the entry below for the title Hitri racunar which appears under the significant title word “racunar.”

This bibliography is available online through HathiTrust Digital Library.

This bibliography was printed annually in Zbornik Slovenske Matice. It provided coverage of books, music, periodicals, and some articles for the years 1898-1906. Each year contains a bibliography of a year with the citations divided into sections for periodicals, series and books. The books are further divided by subject. There are no indexes for any of the years. This is in the same format as Slebinger’s book below. The first year was compiled by R. Perusek, the next three years by Karol Glaser, and the last five years by Janko Slebinger. See the image below for a few citations that appeared in volume 8 under the heading “Literature in Journals and Anthologies.”

Slebinger’s bibliography is a continuation for 1907-1912 of the above title, also compiled by Slebinger, which appeared serially in Matica Slovenska’s Zbornik. It provides bibliographic citations for Slovene books, serials and even articles from some periodicals and anthologies. The citations are arranged by subject beginning with journals and then covering a whole range of topics from music and art to mathematics and geography. There is a special section that lists citations for obituaries of Slovene and non-Slovene writers. Unfortunately for the user, there are no indexes to facilitate use. See the image below for an entry that shows the contents of the collection entitled Slovanksi spomini. Note that at the bottom of the entry are citations to reviews of this anthology. Also note that the alphabetical ordering of items depends on the first significant word, in this case “spomini.” 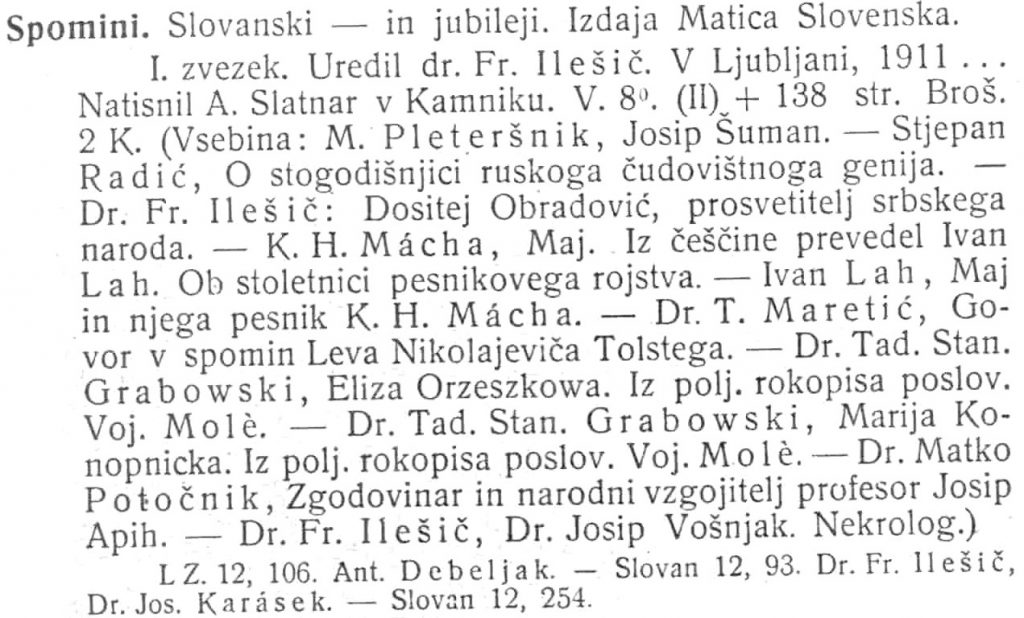 This is another compilation by the noted Slovene bibliographer Janko Slebinger. It is an offprint from the bibliographer’s lists which appeared in Slovenski Tisk. Basically this work supplies citations for Slovene books, journals and music published in 1929. The various lists are not integrated into one list so you will need to check several sections in this work to find what you are looking for. There are indexes for authors, translators, editors, and subjects as well as a list of periodicals by frequency. See the image below for a few sample entries.

This bibliography is a book fair catalog that covers the late 1890’s -1939, some of the previously non-recorded years which are now covered in the online retrospective catalog described above. This bibliography is not comprehensive. Entries are arranged by subject with an accompanying author/subject index. See the image below for a few items that appeared under the heading of music and dance. 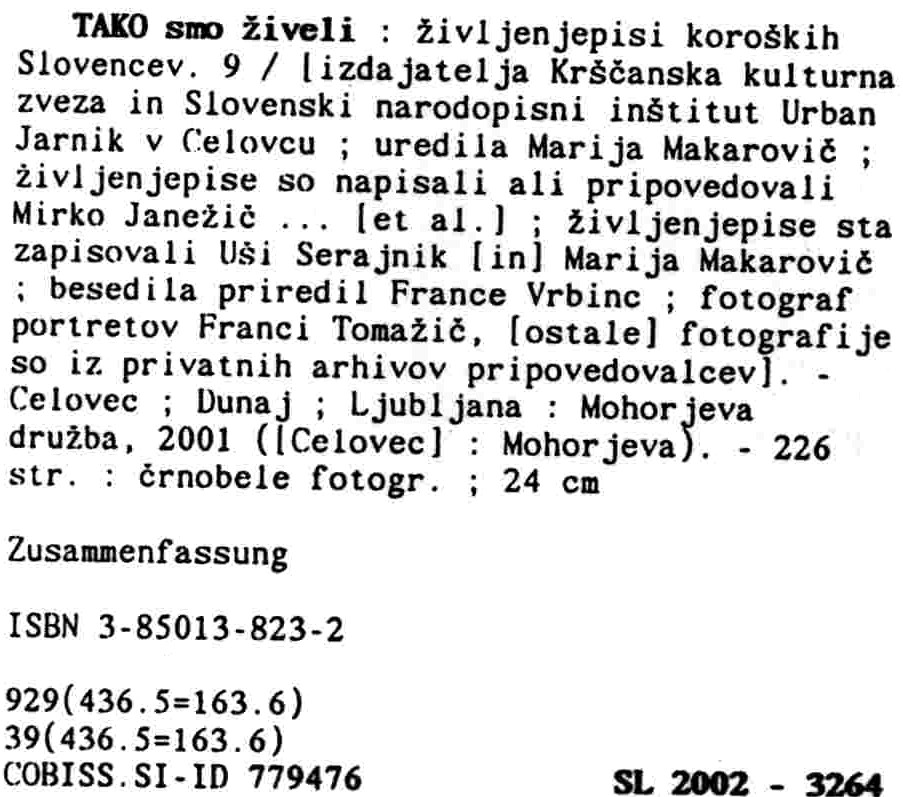 The Slovene national bibliography has been appearing regularly since 1945. It has always provided citations for books and periodical publications and continues to do so, but in the past it also did articles from Slovene periodicals, contents of series, music and musical recordings. For some years there are even publishing statistics for Slovenia. Articles and music are now exclusively available online rather than in printed versions. Over the years the indexing and arrangement of entries has changed a bit. We will trace only the major changes in the title here, but be aware that there may be slight differences from year to year.

For the years 1945-1977 all the parts of the bibliography are published in one volume including the indexes. Beginning in 1951 the periodicals, although still in the same volume, are listed in their own section. In 1978 it divided into four separate volumes: A/serial publications, B/books, C/index of articles, D/other non-book items. U of I lacks section D. The articles section ceased publishing in a printed format with the 1978-1979 volume and became available in an online format beginning with 1990 via the Slovenian online catalogs described above. That means there is a gap in coverage of articles from 1980-1989. (For more information about Slovene periodicals and article indexes see the page devoted to this topic, Periodical Resources for Slovenia.) Also available online is the books section which includes music, electronic publications, and maps. The frequency of the title also changed. It was an annual from 1945-1984, a monthly during 1985, and a quarterly (for the books section) from 1986 to the present. The serials section is still an annual.

The arrangement of the citations within these sections also changed somewhat over the years. Periodicals are listed alphabetically. Books begin with an alphabetical arrangement by surname of author or by title if there is no author. In 1978-79 the books section changes to a classified subject arrangement. For most years music and periodicals are listed alphabetically in their separate sections and in earlier years there were even sections for works by Slovene authors that were published outside of Slovenia in other languages. Articles have always been arranged by subject. The indexes change as well, but for most years there is at least and author and subject index. See the image above left for a book that appeared in the 2002:3 issue under the heading of “Biography.”