Although there were a number of early bibliographies on Croatian materials, some published in Italy, others on Croatian territory, it wasn’t until the Illyrian movement in the 1830’s that bibliography became a feature of Croatian publishing. After the Illyrian movement there were some notable works by Croatian bibliographers published in Croatia, for example Kukuljevic Sakcinski’s 1860 Bibliografia hrvatska, but one cannot discount works involving publications of two or more of the South Slavic peoples or works produced outside the borders of the current country of Croatia. Croatia was at various times part of the Austro-Hungarian Empire, partially under the control of Italy, or in some union with other South Slavs. Thus, all of the works listed on the page for National Bibliography of Former Yugoslavia are relevant for Croatia, as well as catalogs covering publications from Austria and Hungary. There is good coverage of books for Croatia and for Yugoslavia from 1941-1949 and in 1950 the Yugoslav national bibliography Bibliografija Jugoslavije: knjige, brosure i muzikalije began to appear which takes the coverage up to about 1990. There was a short-lived attempt at producing a purely Croatian national bibliography in the late 1970’s, but it collapsed after a few years. After the break-up of Yugoslavia Croatia began in 1993 to issue its own national bibliography entitled Hrvatska bibliografija with coverage commencing in 1989.

There is an important 25-volume retrospective bibliography of Croatian books which fills many of the gaps in national bibliographic coverage for Croatian monographs. It is entitled Gradja za hrvatsku retrospektivnu bibliografiju: Knjiga, 1835-1940 and was compiled by the National and University Library in Zagreb. Eventually the records will be added to the online catalog of the National Library. Some of them already have been. See the annotation of this important source below.

Bibliographies of the various academies of sciences and matica organizations are presented on the page for Monographic Bibliography for Former Yugoslavia.

For further reading on Yugoslav bibliography including bibliography of each of the former republics, see the article entitled “Bibliografija” in Enciklopedija Jugoslavije, volume 1 [U of I Library Call Number: Yugoslav Reference 914.97 En16]. Petar Rogulja’s book entitled Hrvatska nacionalna bibliografija i Ivan Kukuljevic Sakcinski (Zagreb, 1989) [U of I Library Call Number: Main Stacks 015.4972 R635h) has an interesting survey of Croatian bibliography before 1860 as well as much information about Kukuljevic Sakcinski and his bibliography. To read more about recent publishing trends and online resources in Former Yugoslavia see Slavic & East European Information Resources, 1:2/3, 2000. This special issue is entitled “Publishing in Yugoslavia’s Successor States” and most of the articles have a brief discussion of the current state of national bibliography in each of the states. The Croatian article appeared in a later issue, 2:3/4, 2001.

The website of the National and University Library in Zagreb has many interesting online databases such as the OPAC (online public access catalog) of the National Library (Katalog NSK), a union catalog of Croatian libraries (Skupni katalog), and the electronic version of the Croatian national bibliography (Hrvatske bibliografije) all of which are described in this annotation. The OPAC contains records of Croatian books from the National Library since 1981, foreign books or older items acquired since 1984, CIP records (prepublication records) for Croatia, doctoral and masters’ theses, printed music since 1976, cassettes and CD’s since 1990, maps and atlases since 1850, articles from Croatian journals from 1990, and items received on legal deposit from Former Yugoslavia from 1983-1990. In addition some retrospective conversion of older materials has occurred due to various bibliographic projects like the compilation of a retrospective bibliography of Croatian books. Although the National Library may not hold all of the items that are listed in these retrospective bibliographies, the records can still be found in their OPAC. Besides records for monographs, the database also has information on Croatian and foreign periodicals held by the Library. The interface for the OPAC is available in either Croatian or English. It is possible to search by author, title, keyword or ISSN/ISBN. The user may limit by language, date or type of material. Croatian diacritics are necessary to search the catalog. When searching without diacritics the catalog may return some results, leading the user to believe that they have exhausted the available material, but performing a search on a name such as Božic will illustrate the problem. Searching this name with and without diacritics will return very different results. Because of the somewhat unusual filing of entries of words and names that begin with letters that require diacritics, browsing the catalog may also lead to some erroneous conclusions. All this being said this, the catalog is extremely valuable for the Croatian materials included.

The union catalog of Croatia or Skupni katalog includes the holdings of not only the National Library, but many of the major academic libraries of the country, but it is unclear exactly how many Croatian libraries are involved. There are simple search and advanced search options which allow for the construction of some fairly sophisticated searches. The Croatian version of the website provides statistics on the number of records in the catalog: almost 350,000 monographs, over 106,000 article citations, over 40,000 serial records and about 800 collected works. The entry shown below is an example of a 1988 publication in the union catalog.

The final online resource worth mention at the website of the National Library is the online version of the Croatian national bibliography for monographs: Niz/A http://bibliografija.nsk.hr/. The other two parts, Niz C/serials, and Niz B/articles from Croatian journals are not available online. For Niz/A the coverage is from 2006 to the present.

Compiled by the historian and founder of library science in Croatia, Ivan Kukuljevic Sakcinski, whose private library became one of the founding collections of the library of the Croatian Academy of Sciences and Arts, this bibliography is a classic in Croatian letters. In fact, the reprint edition from 1974 has an afterword which discusses Ivan Kukuljevic-Sakcinski and his bibliography. It covers Croatian books and some periodicals from 1483-1863. There are 2605 entries in the main bibliography plus 358 more in the additions which were published in 1863. The reprint edition reproduces the additions as well as the original bibliography. The entries are listed alphabetically in three sections: Glagolitic, Cyrillic, and Latin texts. Items included may have been published in cities that are not part of Croatia today such as Vienna, Novi Sad, and Budapest. No indexes are supplied. The bibliography is not comprehensive, but it was one of the first significant works that can be classed under the heading of Croatian national bibliography. See the image below for a few sample entries. 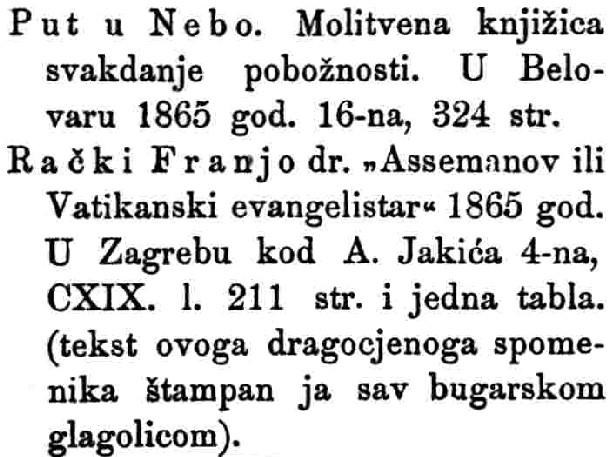 Supplements the Kulkuljevic-Sakcinski bibliography which cover Croatian and Serbian books from 1864-1865 appeared in the journal Knjizevnik in volume 2, pp. 149-152 (1864) and volume 3, pp. 143-151 (1865). The items cited in these short bibliographies may be in Cyrillic or Latin script, published on Croatian or Serbian territory. The second bibliography which covers materials from 1865 also includes a separate section with references to periodicals, not just books. Items are arranged by author or by title if there is no author. See the entry on the left which appeared in the 1865 volume.

Covering 105 years of Croatian monographic publishing in all subject areas, this retrospective national bibliography is a major source for bibliographic information for the time period of 1835-1940. Books that are included may be published in what is the current territory of Croatia, in Bosnia and Hercegovina, or other places. Items in languages other than Serbo-Croatian are covered as well. It was compiled by the National and University Library in Zagreb. Eventually the 66,123 records from this bibliography will be added to the online catalog of the National Library. Some of this process is already happening. The entries are arranged by main entry, that is surname of the author or title if there is no author. There are also entries for certain items that can be considered either books or serials such as almanacs. At the end of each volume there is an index of other bibliographic entities that one might find useful such as coauthors, editors, pseudonyms, initials, etc. and a subject index for people, places, and ethnic groups. A brief history of Croatian bibliography is summarized in the introductory materials. The image below is an entry for a Croatian translation of Balzac.

Updates by year to Novakovic‘s famous bibliography appeared in the following volumes of this title: knj. 26, 27, 31, 35, 40, 41, 44, 46, 57, 59, 61, 65. The updates cover both Serbian and Croatian books, annuals, and some periodicals for the years 1869-1878 and 1883-1884. Additional supplements to the bibliography and updates are found in Letopis Matice Srpske (Main Stacks 506 MAT), knj. 113, 118, 119, 120, 165. Each supplement lists publications by year. (U of I lacks knj. 113 and 120) with entries arranged alphabetically by author or title. Stojan Novakovic himself compiled the additions for some of the years and Dragutin Posnikovic did the remaining years. Until the retropsective bibliography of Serbian books is completed, these updates remain important sources of bibliographic information for Serbian imprints. See the image below for an entry from v. 27.

This bibliographic serial was issued in 12 numbers per year for a four year period, 1941-Apr. 1944. It covered Croatian monographs, music, periodicals, and series. The entries are arranged by subject with periodicals listed by significant title word. Each issue has an author index, a list of series and their individual volumes, and an index of translators and editors. The last issues of 1941-1943 have annual indexes for authors. This serial was the national bibliography for the Croatians during the turbulent World War II years. The introduction to the first issue claims that they are including all publications issued during a particular year. See the entries below which appeared in the 1941:5-6 issue under the heading of law. 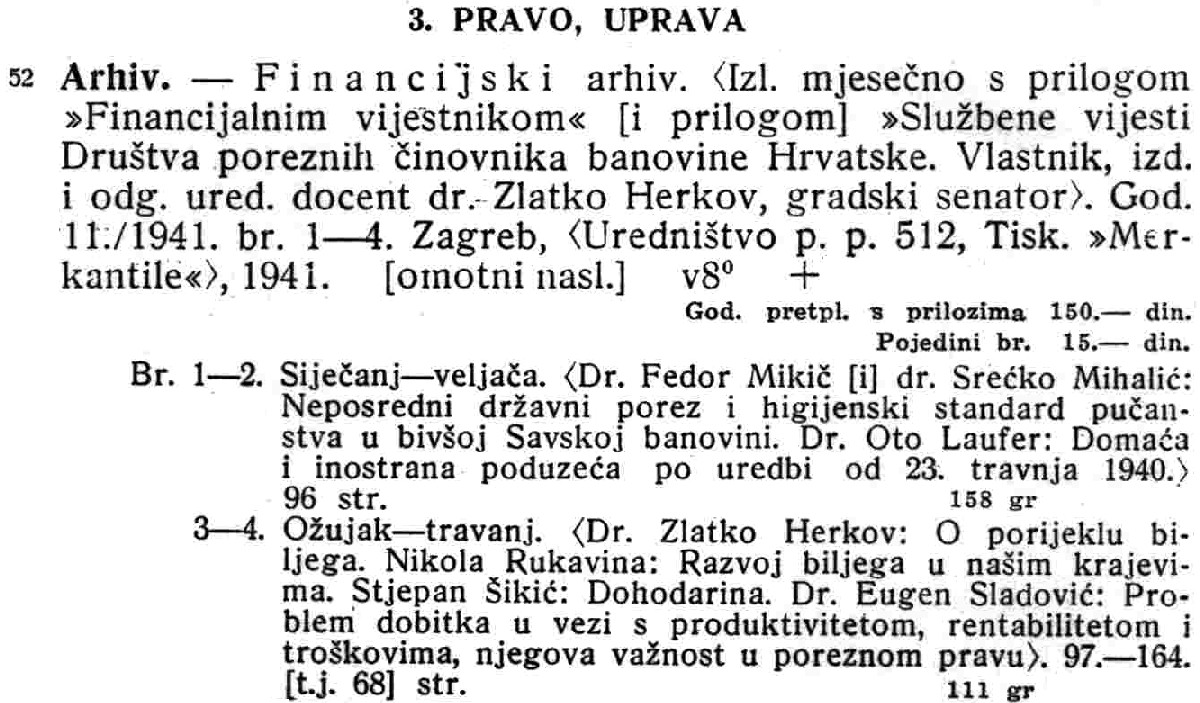 This bibliography which covers 1945-1950 represents the earliest volumes of the national bibliography Hrvatska bibliografija. Niz A. It includes all books, music, and maps published in Croatia during these years. Arranged by subject, author index. The first volume deals with 1945 and 1946. Within each year the items are arranged alphabetically by author or by significant title word if there is no author. Series are also analyzed. See the image below for the volumes of Suvremeni pisci Hrvatske that were printed in 1945. Each successive volume has supplements for the previous years. Each volume also has indexes for subject and people/places as subjects. 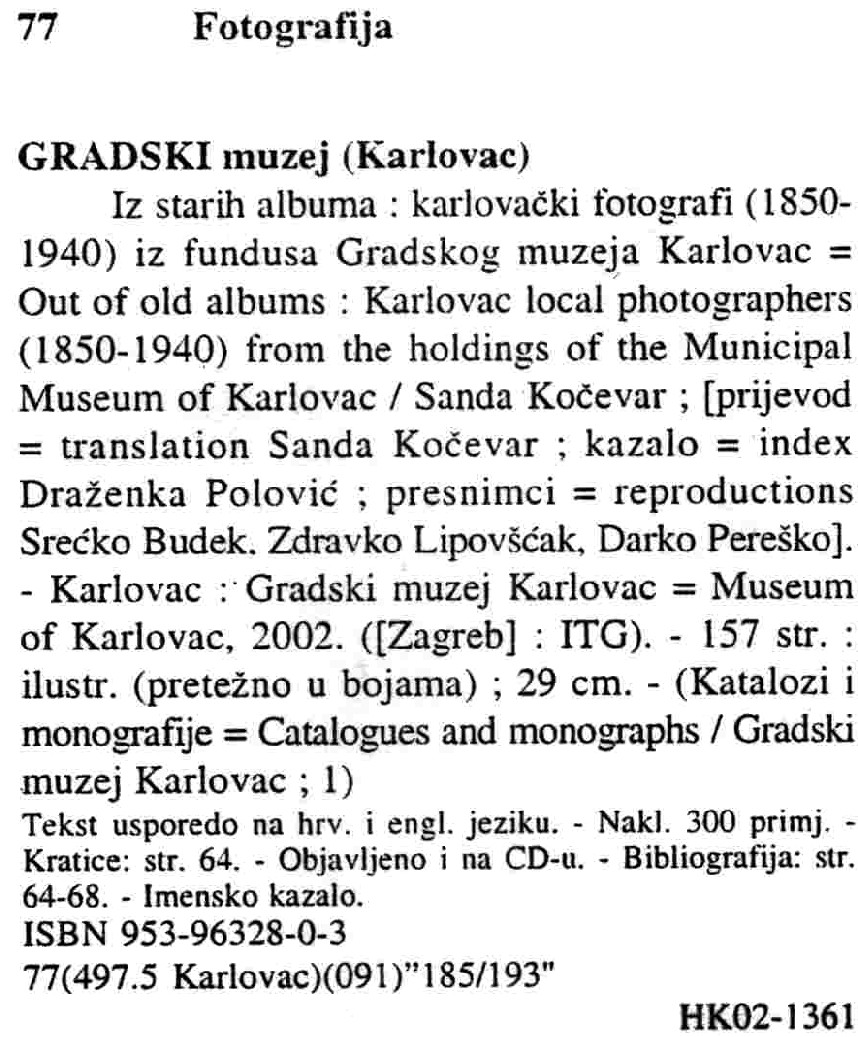 The current national bibliography of Croatia is published by the National and University Library in Zagreb in three sections: Niz A, knjige, Niz B, Prilozi u casopisima i zbornicima, and Niz C, Serijske publikacije. Niz A covers all books, music, maps that are published in Croatia. Niz B and C will be discussed under the page for Periodical Resources for Croatia. Coverage of Niz A begins with 1989 publications and continues to this day. An online version of this title is also available at the website of the National and University Library in Zagreb. Issues are released monthly, but there are no cumulative indexes. Thus, to find a particular publication you must search each issue and use the indexes for each issue. The entries are arranged in a classified subject order and are indexed for author, ISBN, titles, and subjects. See the entry on the left which appeared in the 2002:4 issue under the heading of photography.