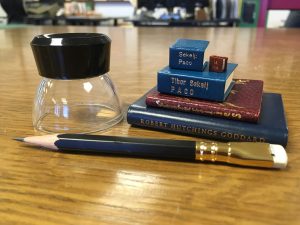 The miniature format recommends itself to a wide variety of genres—from devotional materials to political pamphlets; from almanacs to advertisements; from volumes designed for the small hands and big imaginations of children, to delicately hand-crafted artists’ books. All boast portability, stealth, ease of storage, and economical use of paper and binding materials—pragmatic traits that ought not to be discounted. But practicality alone cannot explain the incongruous grip of the miniature upon our attention.

Our fascination with well-proportioned tiny things is commonly attributed to the same “cuteness” that compels us to care for and protect our young. I do not dispute this theory; but I want to examine more closely the impulse awakened in us by the so-called cute and to question its inherently childish connotation. To avoid “belittling” these little books is, perhaps, a paradoxical suggestion; yes, they are cute as kittens (even when their contents jar with their petiteness). But what of the one who beholds and finds “cute”?

It seems to be the inclination of our culture to lump the lover of miniatures under the same childish roof as the minis themselves: an irrepressible image comes to mind of the lonely spinster lining a dollhouse with miniscule bookshelves… On the surface, the impotence of this image would appear to reside in its parody of “real” motherhood: in the absence of human children, the nurturing impulse never reaches maturity and contents itself with the collection and curation of mini-books (and—it goes without saying—cats). But I think the pathetic flavor of such an image is symptomatic of a culture that believes tenderness itself—along with many other traditionally “feminine” traits—to be a form of impotence.

Tenderness. The metaphor at its linguistic root is that of a string, stretched taut—the same string in attention, strung between subject and object; in the tone of our vocal cords and the tendons of our muscles; in the green tendrils stretching toward the sunlight. It connotes both the sensitivity of a bruise and the innocent vulnerability of youth—and the corresponding vulnerability of caring for that which is tenuous. But are we to believe this caring is weakness? Is it not so much easier—so much more “childish”—to say, like Pierre in Sendak’s cautionary tale, “I don’t care!”?

As I write this in early spring, my herb seedlings are peeking through the soil one by one, blinking sleepily, unfurling leaf by fragrant leaf…; and although I have planted them for their culinary utility, my gratification derives, above all, from taking part in their growth. This participation in growth—that is the essence of tenderness—and I perceive it to be no less than the force that fuels the wheeling of the cosmos. What could be more empowering than to align oneself with this force, in all its forms?

Unlike my herbs, these little books are not destined to grow to full stature (nor will their leaves grow more abundant). But I contend that anything that evokes in us this tender impulse—if only its bookish echo—is to be embraced. And so—I hope you will not only appreciate these books as books—marvelous artifacts in their own right—but in beholding them, experience yourself as tender giant. Permit these tiny tomes to give you, as they have given me, a heightened awareness of the fragility of all such cultural objects, large alike to small—and a renewed sense of responsibility for their safekeeping. Hearken how they reflect back to us, in both content and form: to what do we tend?