The Schamp-Levin Collection contains the papers of Mable Schamp and her second husband, Meyer Levin. Mable Hall Schamp (1912-1951) grew up in poverty but earned a doctorate in chemistry from the University of Chicago in 1936, served as a volunteer in the Spanish Civil War, worked on male contraceptives, battled mental illness, and became the first female professor at the City College of New York’s Chemistry Department. This post highlights Schamp’s life as told by the objects in this collection at the Rare Book & Manuscript Library. 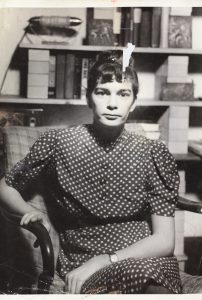 In her later years, Mable signed her name as Mable Foy Jacoby, after her first husband–the love of her life–and her third husband, Irving Jacoby.

Dr. Mable Hall Schamp was born September 20, 1912 in Mathis, Texas to Harvey and Belle (McAlpine) Schamp. When her mother died of sleeping sickness in 1923, Mable stepped in to help her widowed father raise her two younger brothers. The Schamps fell on hard times, and after Harvey lost his home the family slept in their vehicle. Even so, intellect and perseverance helped Mable become the youngest graduate of El Paso High School’s Class of 1927, at the age of 15. Newspaper accounts from this period, saved by Mable in a “School Memories” scrapbook she crafted during her senior year, record an engaged and talented pupil. While in high school, Mable played on the basketball team, learned piano, maintained involvement in the English Club (restricted to the ten best English students at the school), and served as the managing editor of the school newspaper, The Tatler.

Schamp’s son, Jo Basiste [born Eli Levin], recounts that his mother was always searching for greater opportunities, and once she left her rural Texas upbringing, she discarded that portion of her life. A community organization raised money for Mable to attend college, but upon being asked to pay them back per the original agreement she always refused, suggesting that she had repaid her Texas home through an arduous and impoverished upbringing. Schamp moved to Chicago in 1927 and received a Bachelor of Arts from the University of Chicago in 1931. She continued her education and earned her Ph.D. from the same university in 1936. 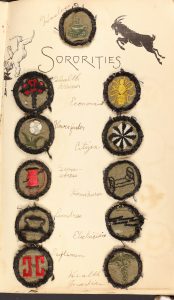 Mable married Murray Foy, a fellow graduate student, in December 1932, but he died of typhoid fever shortly after the marriage. After moving in with Jewish activist and author Meyer Levin, Mable was threatened with expulsion if they did not marry. Mable and Meyer married in 1935 and relocated to Spain, where she assisted the Loyalist cause during the Spanish Civil War. Mable served with the International Brigades, where she was placed in charge of a hospital laboratory in Benicàssim to care for wounded soldiers. In a 1938 letter to Tereska Szwarc, Meyer’s lover, Mable remarks: “The day after Christmas the town next to us was bombed, but nobody was killed. It was a very cruel thing, early in the morning, to waken us in this way from dreams of our happy holiday.” Mable continued the letter by asking if Tereska could send her cigarettes, which were in short supply in Spain. While Meyer worked in Paris as a war correspondent and journalist, Mable had an affair of her own with a German volunteer doctor who had aspirations to assist in the Chinese Civil War. Mable remained in Spain until the birth of her and Meyer’s son (and her only child) in 1938.

Upon her return to the United States, Mable moved from Chicago to California and later found a job as a chemist in Washington, D.C., where she worked on male contraceptives. She lived in a nudist camp sometime in the early 1940s, and photographs in this collection highlight her time there.  She remarried Irving Jacoby in 1944 and moved to New York, where she became the first woman appointed to the faculty of the Chemistry Department at the City College of New York, teaching from 1947-1948 and in 1950. In this same period, Mable also taught at a university in Honolulu where she and her son briefly lived.  Basiste remembers a particular occasion where his mother’s scholarship was recognized: “She [Mable] set the radio dial and got dressed up … A panel discussion came on, the subject being Nuclear Disarmament. Among those introduced was Professor Mable Foy Jacoby. First I heard several men. Then … there was my mother’s voice. She sounded so important.” 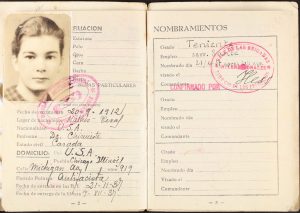 Despite her great success, Mable also struggled with mental illness and began receiving treatments when she was diagnosed with schizophrenia. Alongside her radio interviews, publications, and professional career, Basiste’s memories of his mother tragically highlight her depression, chain smoking, and alcoholism. “More commonly, she was depressed. She sat around, hour after hour, in a slovenly moomoo, or her old polka-dot dressing gown. Talking half to herself, she’d complain bitterly but disconnectedly in a thick voice. She was drinking too much. I stayed outside.” Basiste graphically recounts his mother’s depression, electroshock therapy, and suicide attempts in his memoir, “Mable,” in which he reflects on his early childhood.

Mable’s journals from the last years of her life underscore her experiences with mental illness. She discusses her fits of rage, writes poetry, and pens thoughts on morality, despair, and reasons for hope. She also includes descriptive curses for those who read her private notebooks. Mable died November 5, 1951 from a fatal overdose.

Jo Basiste’s portrait of his mother presents a woman both intellectually gifted and tragic. Writing on her death, he recounts his feelings: “I found it hard to believe she was dead. One day, maybe she’d get in touch with me. Or I’d recognize her in one of those lonely women walking in the streets of the city.” 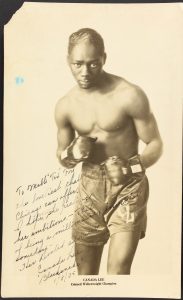 In 1935, Mable received a signed card from Canada Lee (1907-1952), who left boxing for the Federal Theatre Project, performing in Orson Welles’s Hamlet (1936) and starring in Broadway’s production of Native Son (1941). Lee signed the card “Blacksnake,” the role he played in the play Stevedore from 1934-1935. Lee was blacklisted for his involvement in Civil Rights and relationships with suspected communists, dying shortly before a scheduled hearing with the House Un-American Activities Committee (HUAC). He is the father of actor Carl Lee.