Editor’s Note: Writer and musician Stephen Griffith (http://stephengriffith.com/) is working on several projects relating to Carl Sandburg’s The American Songbag (1927). A recent visitor to the Rare Book & Manuscript Library, he is turning over everything he can find about Sandburg’s ground-breaking collection of American folk songs. However, with many of his projects on-hold due to the pandemic, Stephen is taking advantage of isolation to record his renditions of each and every song in the Songbag—all 315 of them! To see him in action, visit: https://www.youtube.com/playlist?list=PLpOsWydjjbyBCB8Jzz6AjVQQuzX4pktFs. In this time of cultural re-examination, you’ll be glad you did!

“Digging the Depths of The American Songbag” was first published by the Carl Sandburg Historic Site Association in their Summer 2020 newsletter, “Inklings and Idlings.” We re-publish it here with their permission. To learn more about the Association, a 503c organization supporting the Carl Sandburg birthplace in Galesburg, Illinois—as well as all things Sandburg–please visit: http://www.sandburg.org/. 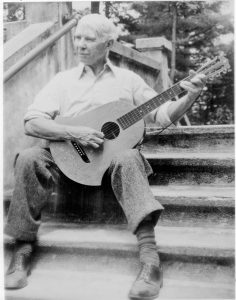 After a concert in 2018 for the Drents Museum in Assen, Netherlands, where I matched folk songs to American Realism works of the latter 20th Century, I wanted to find another grand project that would take me possibly the rest of my life to complete, something needed, something serious, and something entertaining. It did not take me long to land on The American Songbag. My thru-line for this project is a book entitled: Carl Sandburg and The American Songbag: The Roots of Americana Music, which I hope will be completed by its 100th anniversary in 2027.

The American Songbag was years in the making, which begs the question, was Sandburg lucky or prescient? People such as Thorp, Lomax, Wolford, Sharp, Pound, Scarborough, and Handy all published collected folk songs before Sandburg. But these volumes focused on aspects or regions of the United States (cowboy songs, Negro spirituals, or sea shanties, etc.), but Sandburg’s Songbag, in my opinion, was the Big Bang of folk music. As one writer said, “Sandburg. . . saw the big picture of what these songs represented.” In later years it was a foundational document for the folk music revival, an inspiration to Woody Guthrie, Pete Seeger, and Harry Smith, the collector and editor of the influential Anthology of American Folk Music.

When I’m asked, “Why Sandburg and the Songbag?” My answer is because it’s a big beautiful mess. A GLORIOUS mess. It is teeming with treasures. It encompasses the width and depth of this country from the mid-19th century to the early part of the 20th. It is like a drawer in an ancient bureau that when opened treasures spill out. And it deserves in-depth study. And if we care to look, we can find out who we are and where we came from.

My first phase of study had me read everything I could get my hands on from Sandburg’s pen and from the pens of those who knew him. I love him more everyday. Those familiar with the story know the songs he picked up from his hobo days and his singing and collecting of folk songs at poetry readings. It was during this time he began working toward the Songbag, while working on the first two volumes of his Abraham Lincoln biography. This stress, with his continued travel and other endeavors, put a good deal of the decision-making into the hands of the publisher. This led me to the second phase.

Classical musicians put the collected songs into notation. Also, no guitar chords. So I went through the Songbag page by page, re-notating the Songbag digitally, putting chords to all the songs, capturing the text digitally, and slightly editing lyrics. Some, but not all, dialect was removed to make more readable, and a few unacceptable words replaced.

I’m in the third phase now, recording each song, changing keys and chords as needed. Just getting the bare bones of the songs down. Trying to crack them like a nut to get to the meat.

Many of the songs in the Songbag have never been recorded, some are not even indexed in the Songbag. Although the publisher claims there are 280+ songs, I count 315…so far. Some are well hidden.

In the next phase, I plan to dig deep into the historical contexts of the songs and explore the lives of the many, some very famous, contributors. After the pandemic is under control, I plan to step up my research at the University of Illinois at Urbana-Champaign, while continuing to work on the songs, exploring instrumentation, practicing with others, and putting together a few evenings of song. My dream is to perform any of the 315 songs on request.

My last phase is to come to terms with Sandburg’s vision of America and what we can learn or remember about who we are as a nation, and why our shared music is important and essential to remember.

”I don’t have any doubt in my mind about the resilience and strength of folk music,” David Rawlings, a contemporary singer-songwriter wrote, “We’re all basically fumbling through our limited time in the same way and with the same concerns people did before electricity or the steam engine. More or less, folk music’s power comes from the fact we haven’t really changed that much.”

My journey through the Songbag is located at FolkSongIndex.com.

Stephen Griffith is a writer and musician who lives with his wife Lorraine, his youngest daughter Tian, and her four dogs in Asheville, North Carolina.

One thought on “Digging the Depths of The American Songbag”