This week, which marks the 97th anniversary of his death (11/18/1922), we are digitizing a selection of letters from the collection of noted French author Marcel Proust (1871-1922). Besides offering a broad view of the genius of Proust and his milieu, correspondence from his collection is mostly characterized by a set of unique intricacies that complicate its digitization. For non-francophone speakers the challenge lies not only in understanding the content but also in the way Proust used his stationery. Paper, being the medium of letters’ exchange defines and dictates how lines of text were written. Our expert colleagues at the Library’s Digital Services (DS) unit are meticulously making this complex digitization a reality. Let us take for example this letter sent by Proust to André Chaumeix, ca. December 12, 1919, comprising two sheets of paper divided in eight pages. 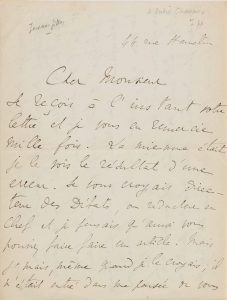 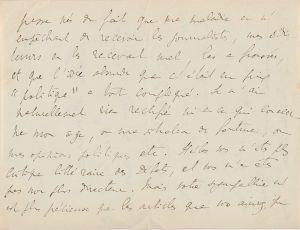 Using pre-folded stationery, Proust starts writing the letter on the recto sides for the first and second leaves while employing an established order and orientation. As the narrative continues Proust writes what would be the third “page” or continuation of the text also on the verso of the first page but in a horizontal orientation. Caroline Szylowicz, our Proust curator and French expert in RBML, was instrumental in diagramming the order of the text. Under her guidance, the DS team was able to understand and capture the order of the text using a very handy and simple “map” Caroline devised for each letter. 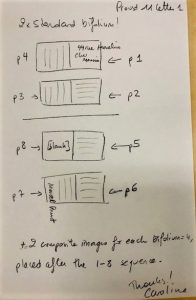 This installment of Proust letters will soon be added to the Marcel Proust digital collection. I want to add a note of gratitude and acknowledgement to our colleagues Angela Waarala and Rachael Johns for their dedicated work capturing the true essence of the letters. À la prochaine!

Video of a Proust Letter

One thought on “Many ways of reading a Proust letter”