In November of 1947, a death in Ellaville, Georgia, led to a court case that caused national outrage and protests for the rights of black women in the Jim Crow South. At the center of the court case was Rosa Lee Ingram, a black sharecropper who, along with her three oldest sons, was accused of murdering their white neighbor. The Ingrams were involved in an altercation with their neighbor that resulted in his death, but the family asserted that they acted in self-defense, as the neighbor was threatening to kill Rosa Lee over a minor incident with their shared livestock and had previously threatened her with sexual assault.

In Ellaville, the majority of the population was African American, but black citizens were denied the right to serve on a jury.[1] As such, the outlook was not favorable for the Ingrams while they were on trial, despite their claims to self-defense. Unsurprisingly, the Ingrams’ case was rushed through the Schley County legal system; indictment, trial, and conviction all took place in under a week. A death sentence was delivered to Rosa Lee and two of her sons, Wallace and Sammie. Civil rights activists saw the trial as a violation of the rights of the Ingrams and began rallying and campaigning for the family. 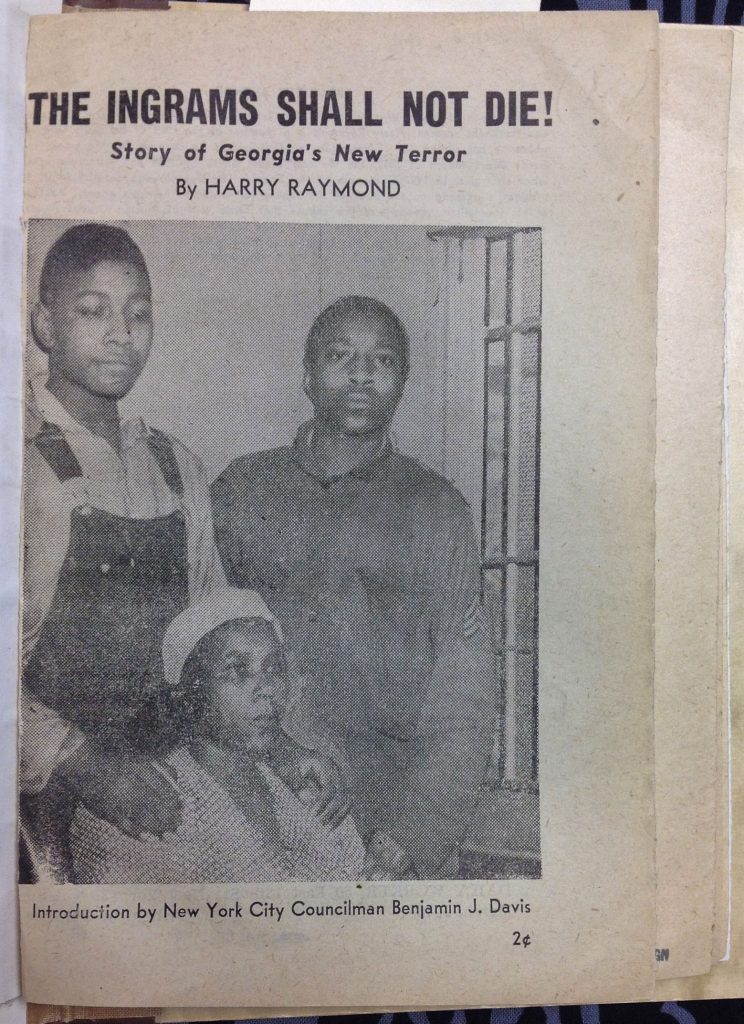 This pamphlet was produced by the Daily Worker, a newspaper distributed by the Communist Party USA. Leftist groups were dedicated to commuting the Ingrams’ sentences and many women who advocated for the Ingrams’ release would eventually go on to found Sojourners for Truth and Justice, a black left feminist group.[2] As Erik S. McDuffie writes in his article, A ‘New Freedom Movement of Negro Women’: Sojourning for Truth, Justice, and Human Rights during the Early Cold War, the case “…represented in glaring terms the interlocking systems of oppression suffered by African American women…” as well as being “…a violation of human rights.” [3] The National Committee for the Defense of the Ingram Family used the trial as a rallying point for collective action against racist and sexist legal systems in Georgia. Through protests and petitioning from the NAACP and black Communist groups around the country, the Ingrams’ sentences were eventually commuted to life in prison. Activists continued to appeal for parole for the Ingram family for years after their sentencing and they were eventually released on parole in 1959. Rosa Lee Ingram passed away in 1980 in Atlanta, Georgia.[4]