On March 8, 1971, heavyweight champions Joe Frazier and Muhammad Ali faced off at Madison Square Garden in what was billed as the “Fight of the Century.” It was the first time that two undefeated boxers fought each other for the heavyweight title. In this first of three fights between the two boxers, Frazier won in 15 rounds via unanimous decision. Muhammad Ali, who changed his name from Cassius Clay in 1964, was known for speaking out against white supremacy and the injustices faced by Black Americans during the Civil Rights Movement. Today he is regarded as one of the greatest sporting figures of the 20th century.

Poet Gwendolyn Brooks was the first Black person to win a Pulitzer Prize in 1950 for her book Annie Allen. For the Frazier-Ali fight, Brooks was commissioned to write a poem which appeared in the official program. In the poem, titled “Black Steel,” Brooks employs her signature style of alliteration while capturing the excitement of the fight. In the last stanza, she challenges the men to ultimately remember the values of black love and brotherhood, despite their rivalry. 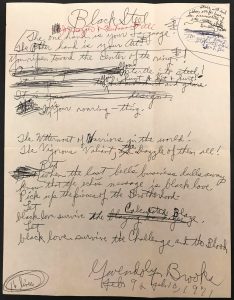 Above is a handwritten draft of “Black Steel” from the Gwendolyn Brooks Papers. Although this collection is currently being processed, and therefore unavailable to researchers, the first and only printing of “Black Steel” can be found in our collection of broadsides from Broadside Press, an independent black publisher in Detroit, MI [Q. 811.08 B78s]. More writings by Brooks are available in our rare books collection.

One thought on ““Black Steel” by Gwendolyn Brooks”