Herbert George Wells was born on this day in 1866 and we want to take the occasion to celebrate his life and work. The Rare Book and Manuscript Library is proud to serve as the steward for the author’s papers and correspondence, as well as a large collection of manuscripts and print editions of Wells’ work. We continually seek to add to our collection of Wells related materials. Here are some of our most recent acquisitions of printed works by H.G. Wells:

Joan and Peter; the story of an education. New York: The Macmillan Company, 1918. (copy 4) 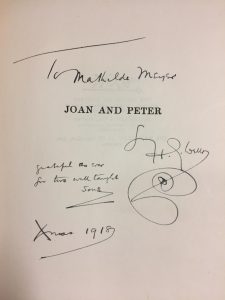 This novel covers the lives and education of two young people in Victorian England leading up to and in the aftermath of World War I. It touches on two of Wells’ most common themes—war and education—when the young people decide to reform the educational system in order to prevent future armed conflict. This copy contains a dedication to his children’s tutor. [823 W46J copy 4]

A children’s book that follows Tommy, a young child who saves a rich man and is rewarded with an elephant. The book is dedicated to Wells’ goddaughter, Marjory Hick, the daughter of his physician. The manuscript for this book was acquired by the Rare Book and Manuscript Library as the 12 millionth item purchased by the University of Illinois Library [Post-1650 MS 0337]. We recently acquired two copies of this work, one of which is a limited edition printing. [Limited ed: WELLS Q. 823 W46ad1929b; and non limited:  WELLS Q. 823 W46ad] 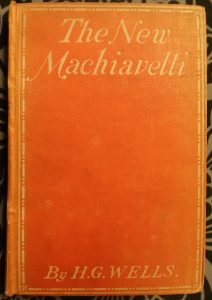 Originally published as a serial in The English Review, this novel is considered one of Wells most scandalous works. Although it contains details of sexual exploits, the real scandal of the novel was the obvious satirical mocking of Beatrice and Sidney Webb, two prominent socialists, economists, and central figures in the Fabian Society. This copy is inscribed by Wells. [823 W46N copy 5]

A French edition of the short story The Pearl of Love. This story was originally published in The Strand Magazine and tells the story of a prince whose wife dies and he attempts to construct a monument to her. This edition was translated by one of Wells lovers and was printed by a French fine press called Les Bijoux Typographiques. [Wells 823 W46pe:F] 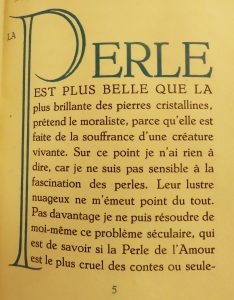 Wells was an accomplished science fiction author as well as a passionate advocate for human rights. You can see more of our holdings on Wells in the library catalog or featured in the online gallery for our 2016 exhibit H.G. Wells: Time Traveler.