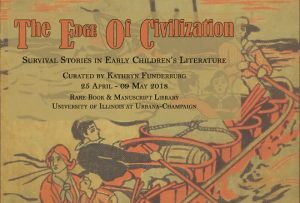 The Edge of Civilization: Survival Stories in Early Children’s Literature
A pop-up exhibit at the Rare Book & Manuscript Library
25 April – 09 May 2018
Curated by Kathryn Funderburg

Dystopian novels like The Hunger Games and Divergent might seem like a modern trend, but survival narratives have been a standard subgenre of children’s literature for many centuries. Whether washing up on a desert island or traveling across the prairie in a covered wagon, young protagonist’s need to overcome great adversity inspired the first children’s stories and remains a fundamental influence for juvenile fiction today.

This exhibit explores the history of survival children’s literature, tracing the development of the genre from its early roots in the robinsonade to the later perils of the American West. Beyond providing entertainment for children, these stories also provide insight into the societal values and concerns of their time.