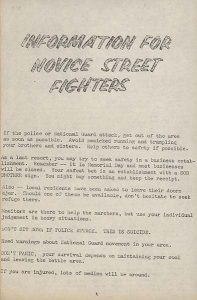 In May of 1969, a battle broke out between residents and police officers over a plot of land owned by the University of California at Berkeley. After the plot had sat vacant and abandoned for a year, local residents and students named the land People’s Park and had begun planting trees, shrubs, and flowers in mid-April of 1969. The university, met with the park’s builders in an attempt to work together and promised not to pursue construction of a parking lot on the land without notice. The university broke this promise when it began constructing a fence around the land on May 13th, 1969.

Two days later, students and community residents led a group of people originally attending a rally about the Israel-Palestine conflict from Sproul Plaza to People’s Park. They found the park fenced off and guarded by roughly 150 Berkeley officers. Protesters attempted to tear down the fence while throwing rocks and bricks at police officers. As the crowd grew to 4,000, Governor Ronald Reagan’s Chief of Staff Edwin Meese III, called in the Alameda County Sheriff’s bringing the law enforcement total up to roughly 800 officers. Officers were given permission to use any means necessary and they did. Sheriff’s Deputies sprayed tear gas, beat protesters with nightsticks, and shot at protesters with rifles. Eventually, Governor Reagan declared a state of emergency and sent 2,700 National Guard troops to Berkeley as the crowd of protestors reached 6,000 people.

May 15, 1969, came to be known as Bloody Thursday. During the protest, 7 officers and over 100 protesters were injured, including one student named James Rector who was killed by a gunshot wound to the head. The National Guard stayed in Berkeley for several weeks following the incident patrolling the streets, enforcing curfews, and breaking up possible protests. Following the memorial for Rector, students, faculty, and residents staged numerous rallies against the use of tear gas and lethal buckshot during the May 15th protests.

This pamphlet was created during the weeks following May 15th and was a guide circulated to protesters so they could identify the types of tear gases used by the National Guard and their appropriate treatments. The Medical Committee for Human Rights, a group of medical professionals that began during the civil rights protests was consulted during the creation of this pamphlet. It outlines how to recognize and treat CS tear gas, CN tear gas, Nausea gas, Blister gas, and Mace. This incident was instrumental in creating nation-wide strategies and policies for police use of non-lethal weapons for riot control. The only gas still used against American protestors today is CS tear gas. The police now use other methods such as rubber bullets, pepper spray, and water cannons to control large crowds. As protests continue, information like this pamphlet is still relevant and important to continuing the long tradition of resistance and protest in the United States.

Information for Novice Street Fighters. Berkeley,CA, 1969, MSS00005. For more information about this item, ask about the Activism pamphlets in the Ewing Cannon Baskette Collection. See more images from this publication on our Tumblr.