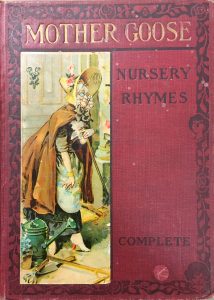 Who was Mother Goose? Was she real, or just a fictional character? The truth behind the identity of the friendly woman whose nursery rhymes have charmed children for generations may never truly be known. Some believe that Mother Goose may date back to the 10th century French court. According to legend, the wife of French King Robert II, Bertha of Burgundy, was known as “Queen Goose-Foot” and was a great storyteller. Another popular theory is that Mother Goose was a 17th-century Bostonian woman named either Elizabeth Foster Goose or Mary Goose, who entertained her grandchildren with rhymes. According to this theory, Goose’s son-in-law, a publisher, collected her rhymes and published them as a book. There are also many who believe that Mother Goose was never a real person, but was simply a character who began to appear in French fairy tales and nursery rhymes in in the 1620s and 1630s.

No matter who the real Mother Goose was or wasn’t, nursery rhymes like “To Market to Market”, “Little Miss Muffet” and “Ride a Cock-Horse” have left their mark on children’s literature, and continue to do so to this day.

See GIFs from Mother Goose on our Tumblr.