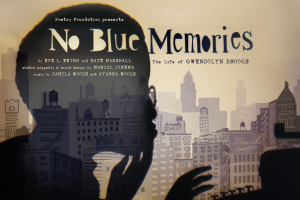 In mid-November, No Blue Memories premiered at the Harold Washington Library in Chicago. The paper puppet show, performed by Manual Cinema, focused on the life of Gwendolyn Brooks, the first Black recipient of the Pulitzer Prize in 1950. The show was written by Dr. Eve. L. Ewing and Nate Marshall, featured live music by Ayanna and Jamila Woods, and was supported by the Poetry Foundation.

The set featured a large projection screen floating above a set of instruments to the right and four overhead projectors placed strategically in front of a smaller projection screen at stage level. The play began with a scene familiar to many: an elementary school graduation. Because Brooks was a frequent guest speaker at graduation ceremonies across the country it was an appropriate introduction to the story of her life. As the show continued, scenes flowed seamlessly, intermingling paper shadow puppets, live acting, and perfectly-timed musical interludes. Renowned musical siblings, Jamila and Ayanna Woods along with a stellar band, performed a song using Brooks’ poem “We Real Cool”, marking the first time an artist had been given permission by the Books estate to create such a piece.

If Ewing and Marshall meant to create a piece that introduced Brooks to new audiences and told her story in a new way to those familiar with her work, they were incredibly successful. As the processing graduate assistant for the Brooks collection, I learned a lot during their storytelling of her life. I’m happy to have had the opportunity to see this work and even happier to witness the enthusiasm from the audience. With only three free performances in the 200-seat theater, quite a few people were unable to see the show. I hope this renewed interest in Gwendolyn Brooks’ 100th birthday will encourage future performances of No Blue Memories and encourage any others with an interest to in the collection to come for a visit. While you’re waiting for a future performance of No Blue Memories, you can always check out Celebrating Gwendolyn Brooks@100, an interactive story map with memories of Gwendolyn Brooks from her archives and librarians around the state of Illinois.