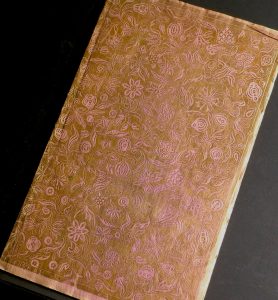 The Cavagna Collection contains many surprises waiting to be discovered, and recently a particularly interesting find came across my desk. Like numerous other items in the collection, it is in a simple paper wrapper. In many instances paper wrappers served as temporary coverings until a work received a more permanent binding. In this case, however, the use of decorated paper gives a sense of intentionality. Among the subset of decorated paper wrappers in the Cavagna Collection, this one is quite distinctive because it includes the name of the designer. It is an example of brocade paper, also sometimes called “Augsburg paper”, an embossed paper decorating style that was developed in Augsburg at the end of the 17th century. As is typical for signed papers, the frame at the bottom of the sheet includes the name and residence of its creator along with a serial number for the design. In this case the designer is Johann Michael Munck (1700-1762?), who worked in Augsburg beginning around 1739 and belonged to a family of paper decorators. The paper is painted purple and features metal leaf in negative relief, creating an imitation-gold background for the purple color of the paper to show through on the embossed flower design. The plate is signed as style n. 2. 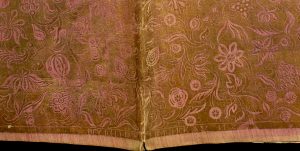 The work inside this decorated wrapper is equally distinctive within the Cavagna Collection. Although the collection mainly includes Italian imprints, there are also items in other languages and printed in other parts of Europe. This particular item is a collection of coats of arms, genealogical tables, and other documents related to Franz Lothar (Otto) Theodor von Andlern (1697-1767?). Austria’s prolonged involvement in northern Italy means that there are many connections to Austria in the Cavagna Collection, although the von Andlern family itself has no discernible connections to Italy. 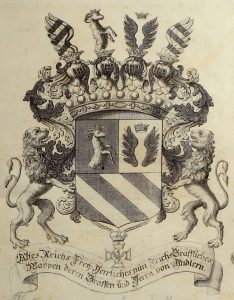 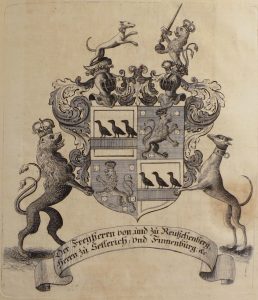 Franz Lothar Theodor von Andlern and his brother Franz Reinald, along with their descendants, were elevated to the Reichsgrafenstand, or the body of imperial counts, by Holy Roman Emperor Charles VI in 1737. Proof of one’s noble ancestry was crucial in appointments such as this, and the collection of documents likely serves the purpose of verifying Franz Lothar Theodor’s noble status for a similar type of appointment. It includes two engraved coats of arms, one for the Andlern family and one for his mother’s family, the Setterich branch of the Reuschenberg family, as well as genealogical tables for both families. The Andlern tables trace back to Conrad Franz von Andlern’s appointment to Henry IV’s imperial court in 1056, but the main details focus on Franz Lothar Theodor’s father, Franz Friederich von Andlern (1617-1703), his five wives, of which Maria Philippina Erestina Reuschenberg Setterich (1658-1735) was the fifth, and his children. Both genealogies are signed by the genealogist Johann Seifert (1655-1733) of Regensburg, although the Andlern genealogy includes dates subsequent to 1733, including a description of the brothers’ 1737 elevation to the Reichsgrafenstand.

Along with the coats of arms and genealogies, there are other printed documents in the volume. One of these focuses on the earlier history of the family and the elevation of an earlier Franz Friedrich von Andlern (1515-1543) to the Reichsritterstand, or the body of imperial knights, in 1535 by Holy Roman Emperor Charles V. The other two directly relate to Franz Lothar Theodor and are personal testimonies from Franz Georg von Schönborn (1682-1756), the Archbishop-Elector of Trier, and Friedrich Karl von Schönborn (1674-1746), the Prince-Bishop of Bamberg and Prince-Bishop of Würzburg. The von Schönborn family appears to have been closely connected with the von Andlerns, as Lothar Franz von Schönborn (1655-1729), the Archbishop-Elector of Mainz and uncle of both letter-writers, baptized Franz Lothar Theodor and later gave him a position in 1715. The letters are dated three days apart on 1735 February 13 and 16 respectively, and they have accompanying printed certifications from imperial officials in Vienna on 1736 February 7 and November 7. 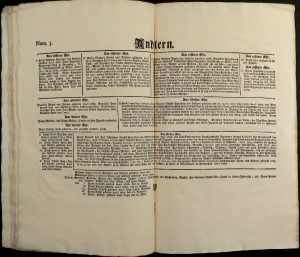 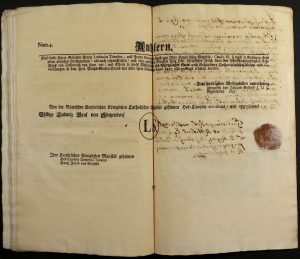 Besides printed certifications on documents, however, the work also includes two manuscript certifications in Latin with red wax seals. These are written on the verso at the end of each of the two genealogies and attest their truthfulness. The certifications are both dated 1743 March 30 and were signed by Sir William O’Kelly de Aghrim (approximately 1670-1744 or 1751), the Inspector of Arms to Emperor Charles VI and, because of the dating of the certifications, presumably to his successor Charles VII as well. O’Kelly was born in Galway County, but left Ireland in 1690 to study in Leuven and Paris before settling in Vienna around 1698 and entering imperial service under Leopold I. He was knighted in 1707 by Joseph I. His identity as an Irishman serving as the imperial Inspector of Arms adds yet another international dimension to this item on German nobility that ended up in the predominantly Italian collection of Conte Antonio Cavagna Sangiuliani. –SH 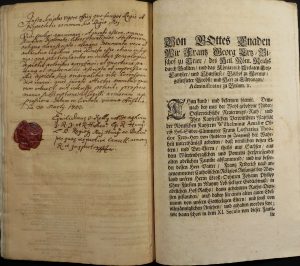 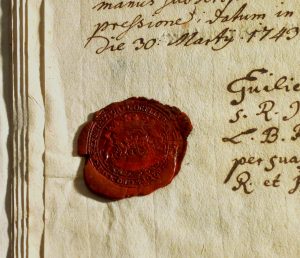