Return to top
We’ve recently finished processing Items from the Larry McMurtry collection of H.G. Wells. The items in this collection formed a part of Larry McMurtry’s personal collection of H. G. Wells and includes some of H. G. Wells personal correspondence, publishers’ correspondence and records, items related to the production and marketing of the film Things to Come, and drawings, advertisement material, and signed books by and related to H. G. Wells.  Larry McMurtry is perhaps best known for his novel Lonesome Dove (1985), for which he won a Pulitzer Prize, and for his Academy Award-winning screenplay for Brokeback Mountain (2005).
Herbert George Wells (1866-1946) was an English novelist, essayist, journalist, screenwriter, and political figure, who revolutionized modern science fiction with works such as The Time Machine, The Invisible Man, and The War of the Worlds.
Try your hand at deciphering Wells’ handwriting in this photo depicting some of his letters to Naomi Mitchison, Scottish novelist and poet. 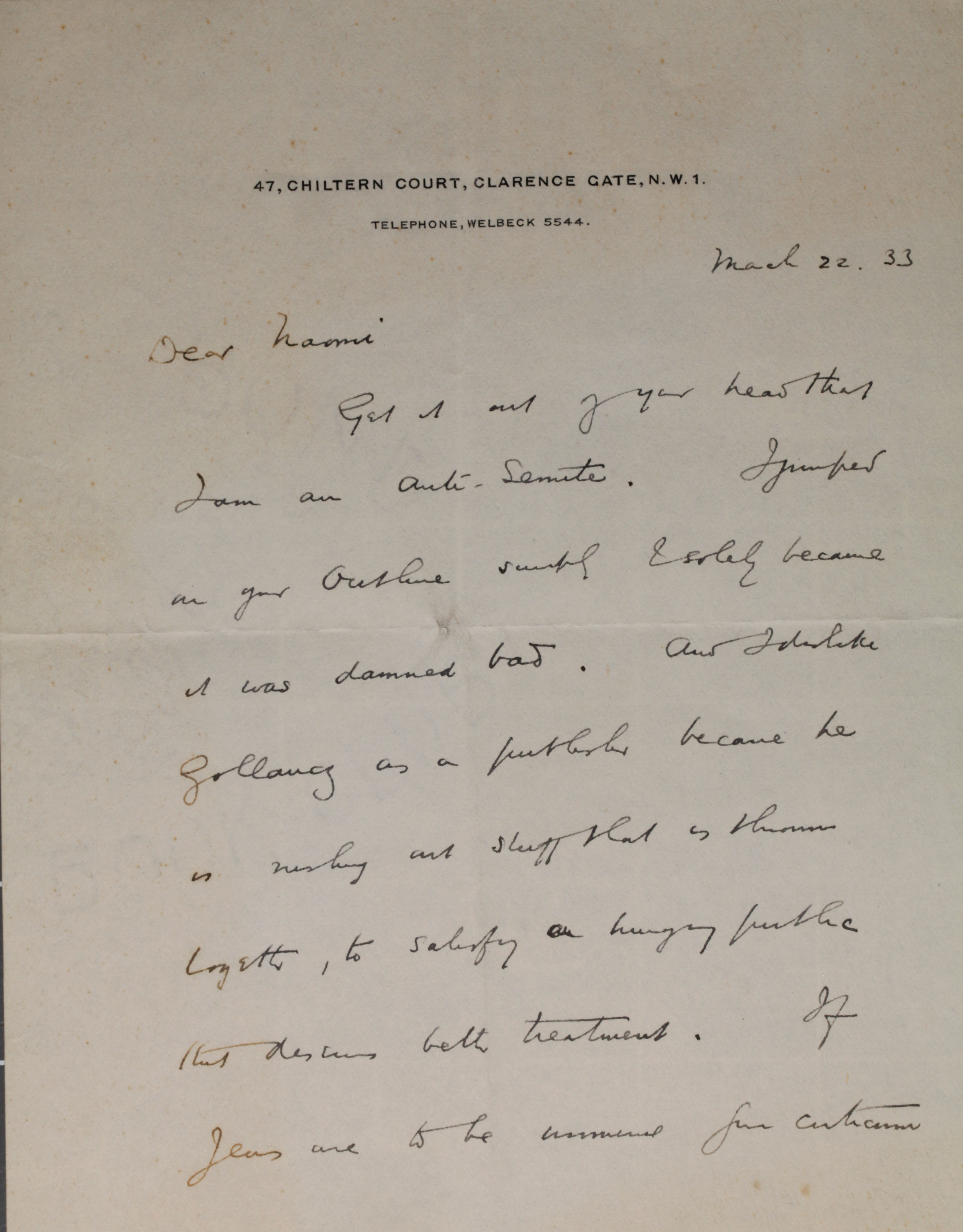 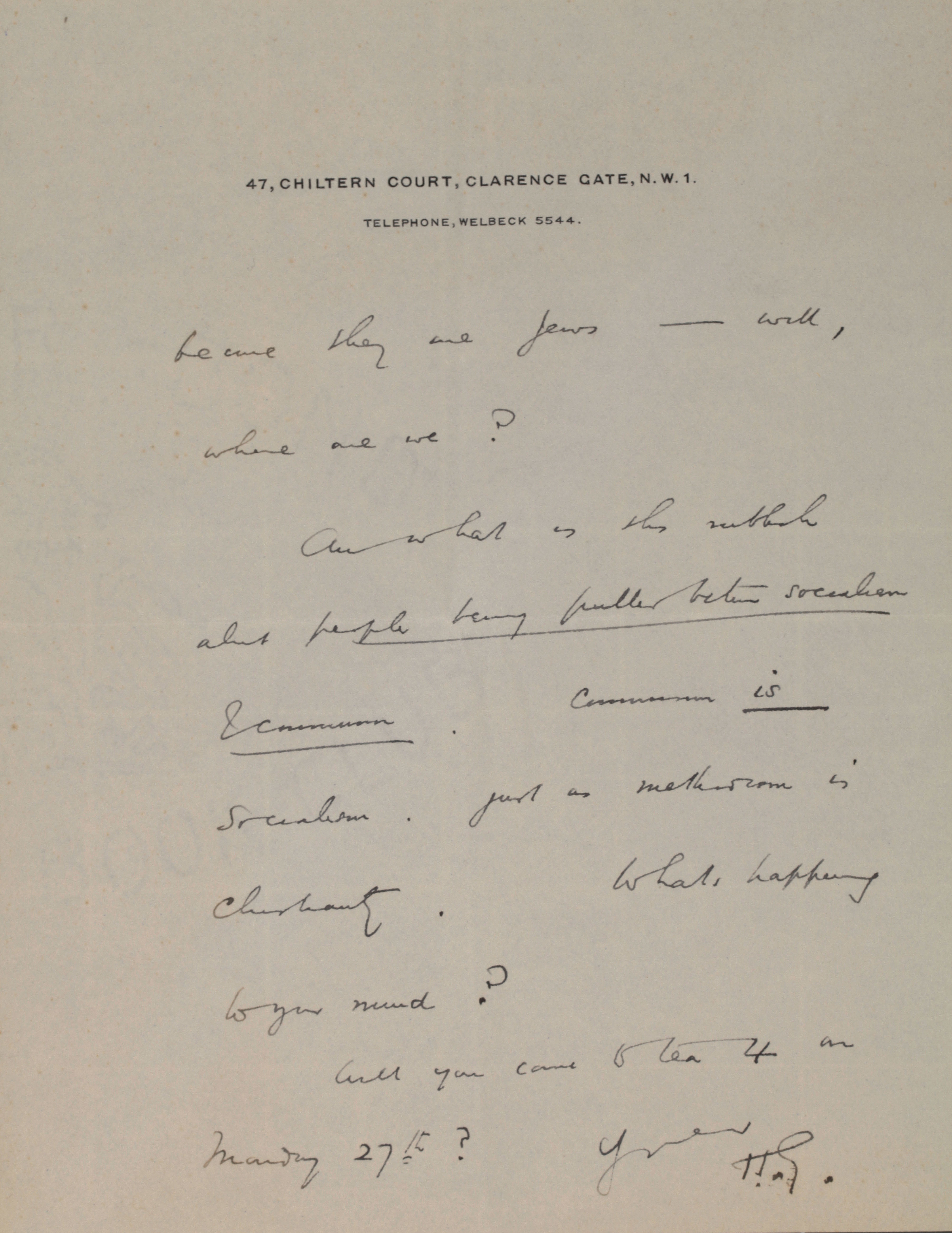 In addition to Wells’ personal correspondence, this collection also contains around ninety letters, contracts, and financial records detailing the particulars of publishing his work. These letters provide fascinating insights into the relationships between the author and his publishers as well as between British and American publishers.
For example, the correspondence traces a misunderstanding over the royalty payment for the inclusion of The Island of Dr. Moreau in Seven Famous Novels.  The situation got rather tense, as when Dodd, Mead and Company wrote the following to A.S. Watt of A.P. Watt & Son on July 13, 1934:
“We are sufficiently old friends so that I feel that I can tell you quietly [sic] frankly that I was considerably annoyed and genuinely surprised that we were not consulted concerning the inclusion of THE ISLAND OF DR. MOREAU [sic] in the Knopf anthology. …Is not the original fault yours in not having cleared up the matter at the start, rather than leaving it to us to make a claim for our rights when the book was on the verge of publication? I see no alternative but to deduct the 10% commission from the author’s share of the earnings and hold it here for the present until you have straightened out the situation….”
Another letter, written on May 29, 1947 from Bennett A. Cerf, of Random House, to Howard Lewis, of Dodd, Mead & Company, reluctantly withdraws Random House’s objection to Collins publishing Tono Bungay in Canada.  As seen in the below quote, Random House’s frustration is clear.
“I see that the course of the Tono Bungay proceedings is taking its pre-determined and completely predictable way.  By this time, I guess we all ought to be used to the situation, but somehow it still astonishes me to see how blandly English publishers can ask American publishers to waive foreign or subsidiary rights and, in almost the same breath, threaten dire legal proceedings if we ship a handful of copies of a book on which they control the rights into India or South Africa:
However, none of us here wishes to be disagreeable about the Tono Bungay business, particularly since the English publisher is Collins, one of the nicest.” LV