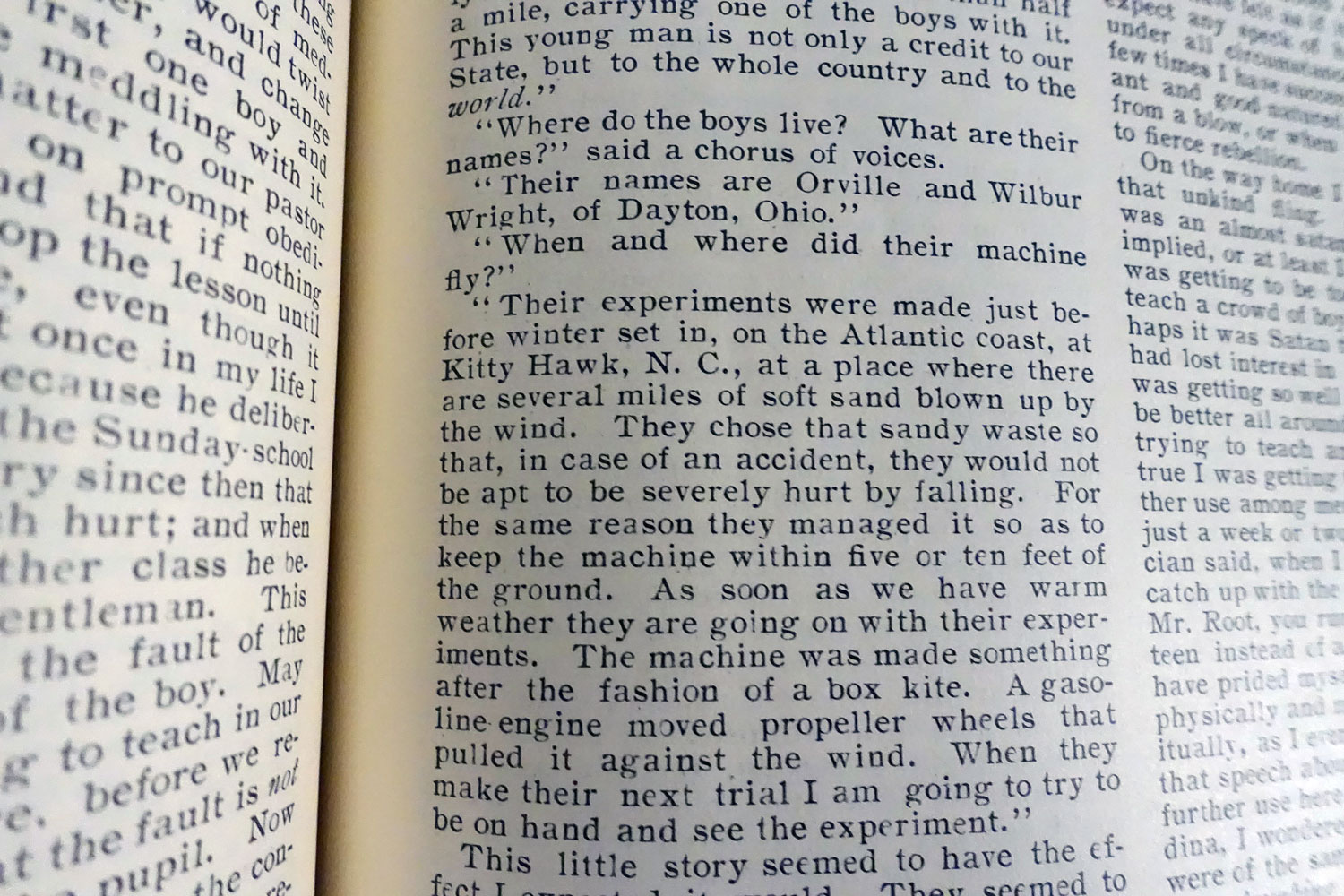 When the Wright Brothers went to Kitty Hawk, North Carolina to successfully test their “Flyer,” the first successful airplane, they did not drag behind them a train of reporters, public relations flacks, or the other impedimenta we associate with technological breakthroughs. There was too much uncertainty; there had been too much failure before. As it happened, the December 1903 flights were a breakthrough—but unspectacular, as the Wrights struggled to control the plane.

A few scant messages about the flight leaked out from this distant outpost. They did not make an impression, except upon Amos Ives Root, a businessman in Medina, Ohio. He was a beekeeper and owned a candle business, and published a beekeeper’s journal, Gleanings in Bee Culture. Besides beeswax, he was passionate about both his fervent conservative Christian faith and about keeping abreast of the latest advances in technology. He was the first American to ride a velocipede and was an early adopter of the automobile, which he had to defend on Christian grounds to his detractors. Inspired by the bees around him, he eagerly awaited powered flight.

The Wrights, and their Flyer, were thus of tremendous interest. Root particularly liked that they were the sons of a prominent minister. In March 1904—three months after the first flight—he mentioned them in his “Our Homes” editorial column, which closed out every issue of Gleanings. Several months later, Root drove across Ohio to see the Wrights in Dayton.

By fall and winter of 1904, the Wrights had made significant improvements both to the Flyer and to their piloting skill. Over the course of 1904 they would perform over a hundred flights—again, to very little fanfare until Amos Root arrived at Huffman Prairie. There, Root was the first journalist of any definition to actually see an airplane in action—and it was quite a show, with the airplane able to make complete circles, get thirty feet in the air, and stay aloft for more than five minutes, all of which had been impossible two years earlier.

Root depicted the scene at length in “Our Homes” feature for the January 1, 1905 issue of Gleanings in Bee Culture. He began by invoking a Biblical text—“What Hath God Wrought?” from the prophet Jeremiah—which was also Samuel Morse’s first telegraph message. He described the flights he saw, the conversations he had with the Wrights and their assistants, and explained the plane’s shape and its workings, in layman’s terms.  He also speculated on the future of the airplane—even though he hedged his bets, his technological optimism shone through.

Gleanings in Bee Culture lives on as Bee Culture, and Root Candles still produces candles. Root’s status as the first published eyewitness of powered flight is just now becoming widely known. The 1904 and 1905 issues of Gleanings in Bee Culture featuring the Wrights have become rare, and the ones that survive have become brittle with age.  The University of Illinois Library is fortunate to have copies in good condition, with only minor wear. The Rare Book & Manuscript Library invites you to take a look at them, where they stand alongside a collection of other important scientific and technological articles and journals. —Alfred Wallace, graduate student, Graduate School of Library and Information Science

One thought on “Who Saw the Wright Brothers’ First Successful Flight?”