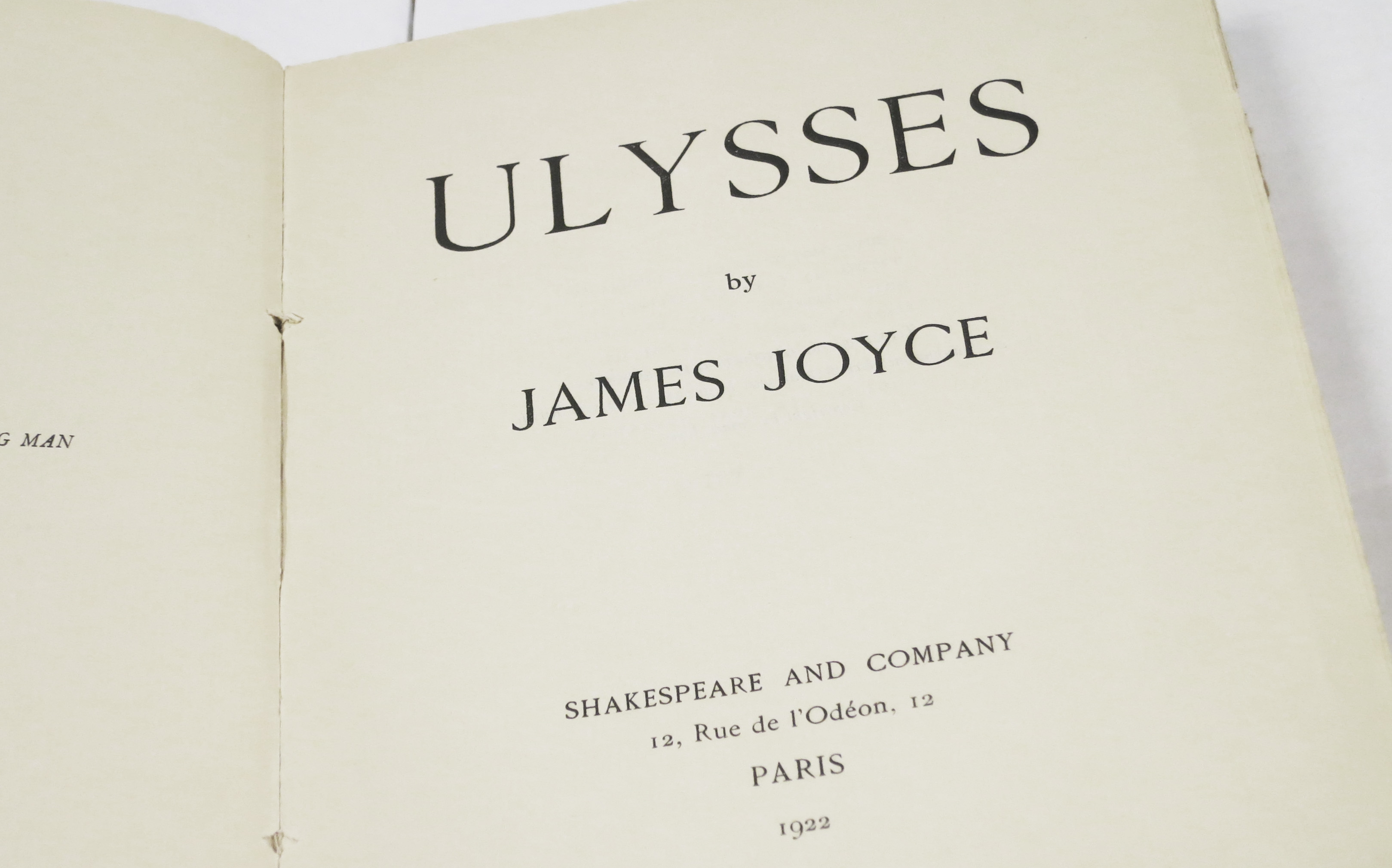 Today is Bloomsday, the anniversary ofthe day that James Joyce met his future wife, Nora, as well as the date on which his novel Ulysses takes place.

Ulysses recalls a single day in the lives of advertising man Leopold Bloom and brooding twenty-something Stephen Dedalus. Notorious for its length (over a quarter-million words) and narrative complexity (one 150-page chapter is written as a play; Bloom’s wife Molly thinks in an unpunctuated stream of consciousness in the final chapter), Ulysses has taken its place as one of the best-known modernist novels in the pantheon of English-language literature. The chapters are modeled on events in Homer’s Odyssey, though there is little outward resemblance between Homer’s epic and Joyce’s depiction of a rather ordinary day. 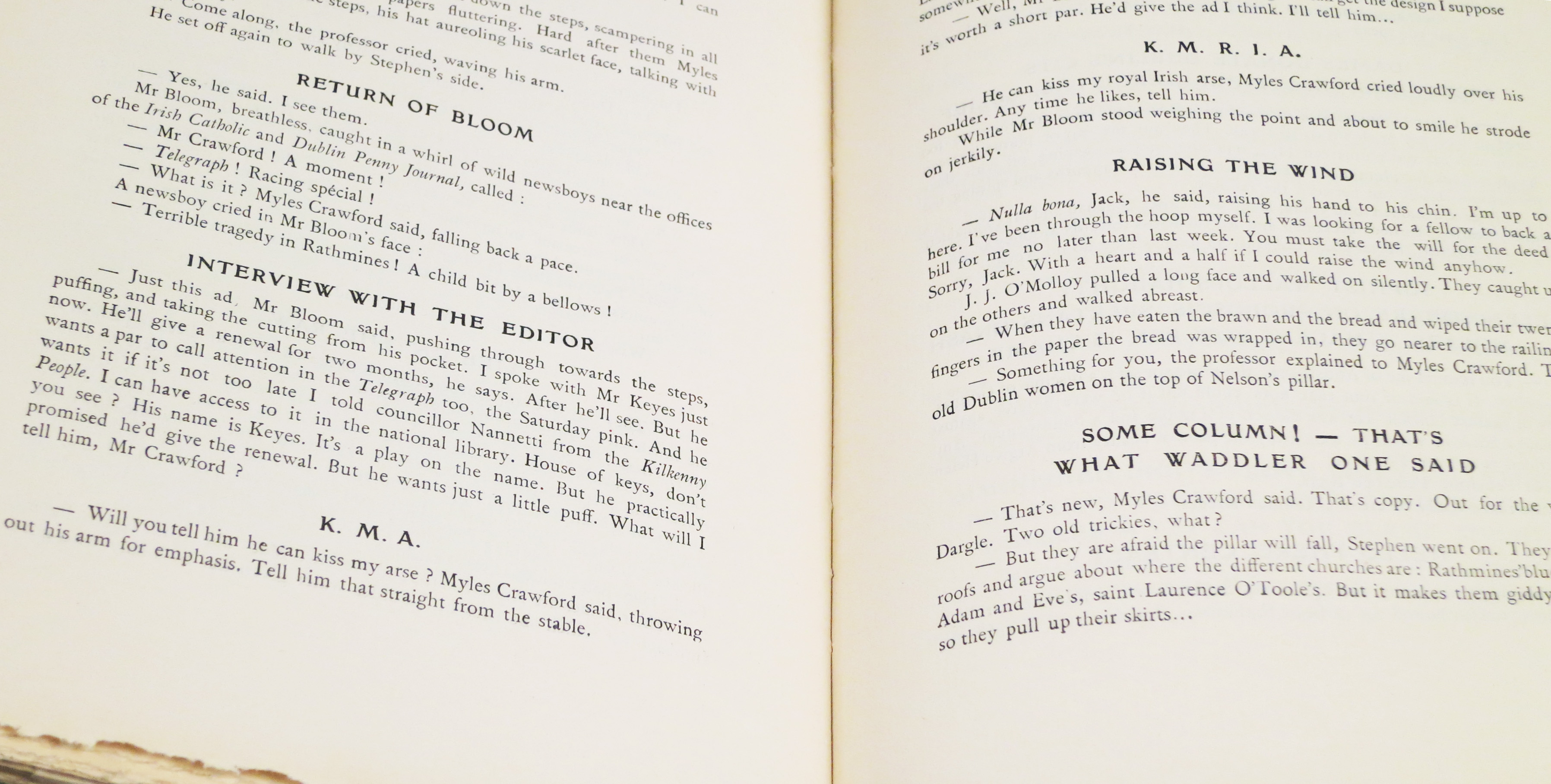 Like Dubliners before it–which we discussed on January 31st, 2014—Ulysses has a fraught publication history. After two American publishers turned the novel down because of controversial passages which he was unwilling to delete, Joyce turned to ex-pat bookshop owner Sylvia Beach, who published the book under the imprint Shakespeare and Company, the name of her Parisian bookstore. RBML holds an original 1921 prospectus for the book. This two-sided, single-sheet publication includes a blank order form advertising three editions: the first “on Dutch hand made paper with signature of the Author” (350 fr.), the second “on verge d’Arches” (250 fr.), and the third “on hand made paper” (150 fr.). 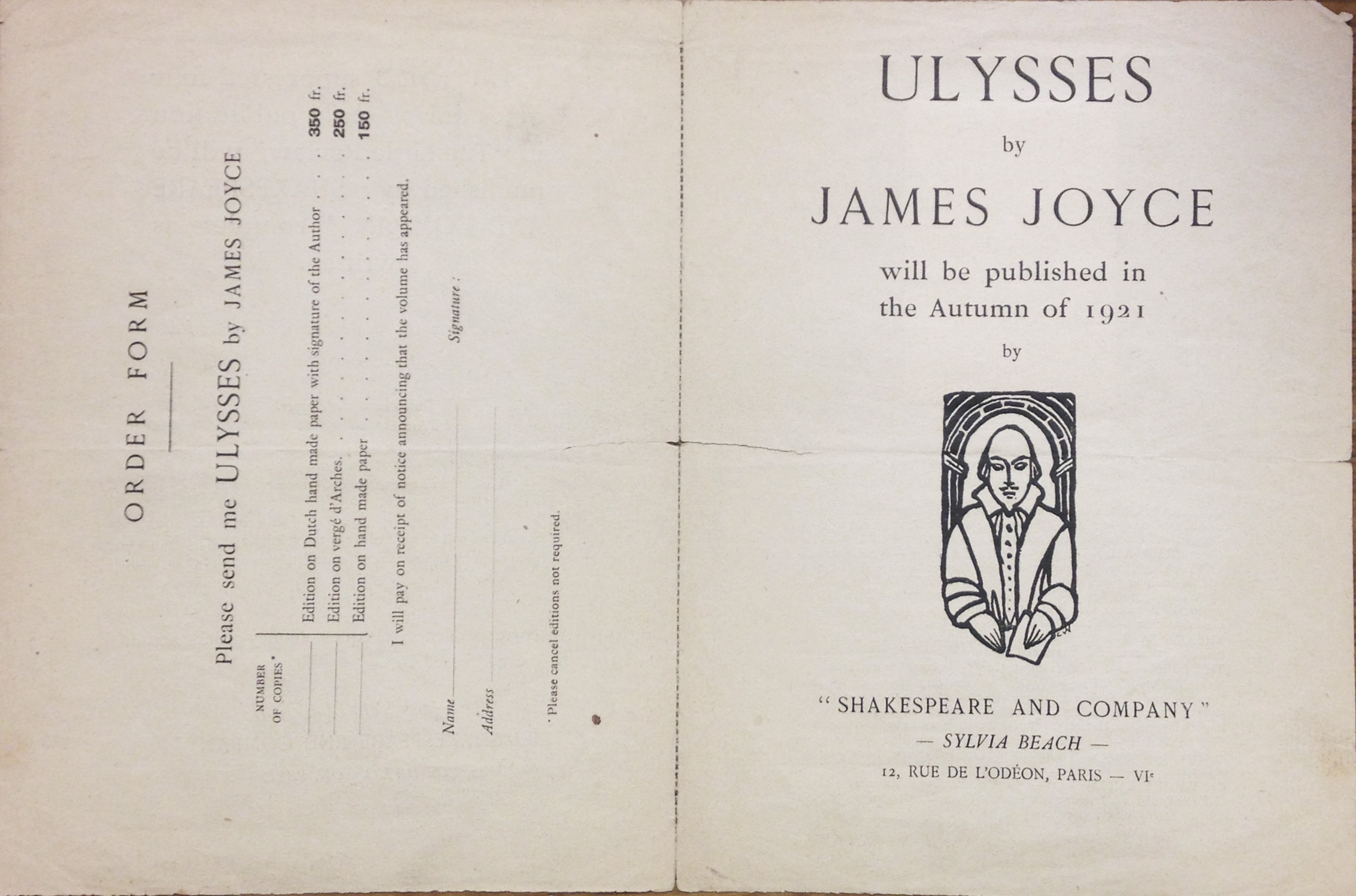 We also hold a scarce 1927 protest against American publisher Samuel Roth’s unauthorized republication of the novel in his magazine Two Worlds Monthly. Roth published Ulysses in a protest against censorship and in a bid to increase the readership of modernist works, but ac 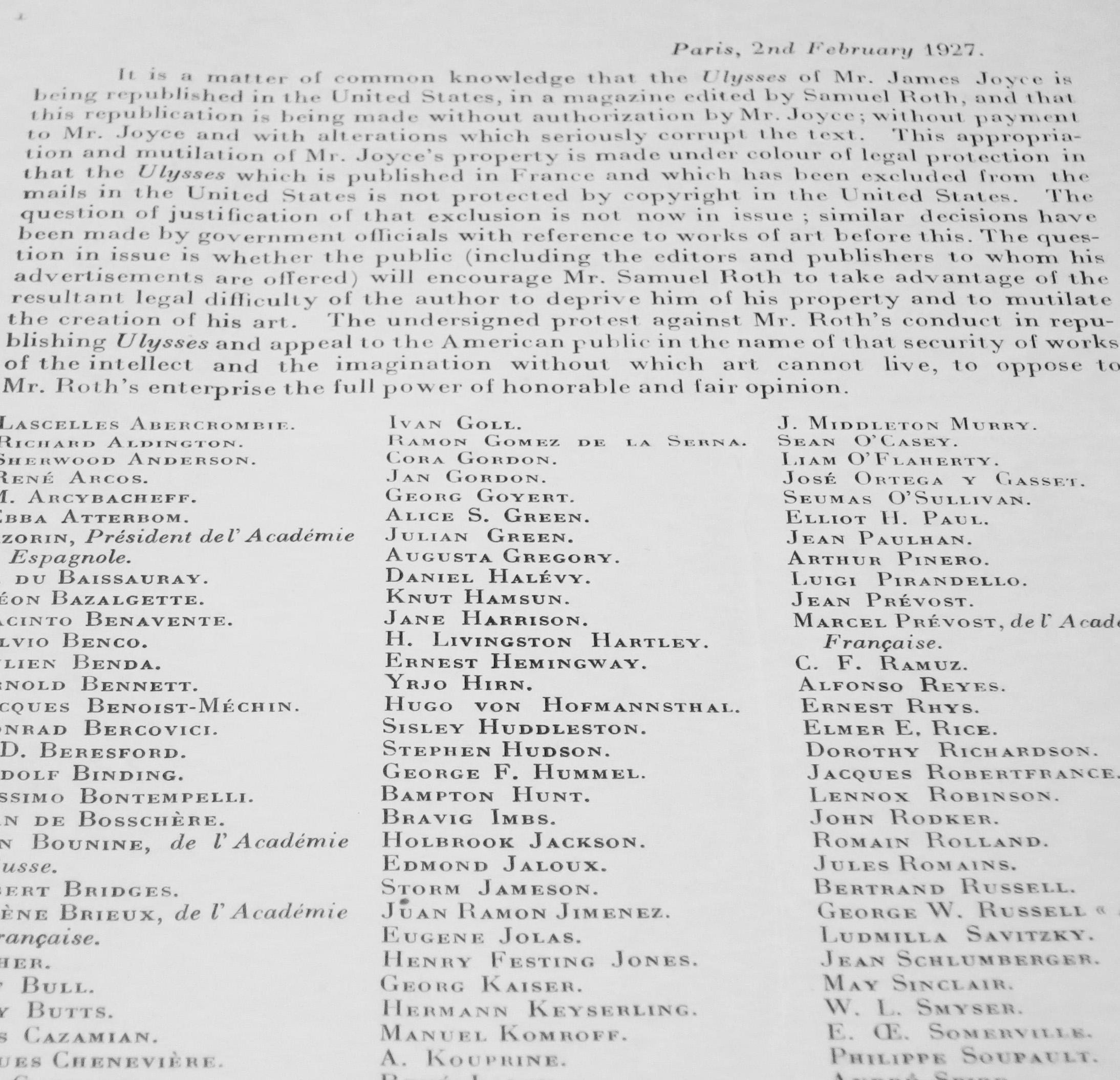 cording to Joyce and his international cast of protestors, Roth failed to pay Joyce and his serialization contained “alterations which seriously corrupt the text.” In actuality, Roth did pay Joyce, but the money never made it to the author’s overseas bank account. Roth also insisted that the only changes to the text occurred through employee error. Among those who signed the protest are such luminaries as Bertrand Russell, Knut Hamsun, Albert Einstein, T.S. Eliot, André Gide, José Ortega y Gasset, H.G. Wells, Virginia Woolf, and W.B. Yeats.

The first edition of Ulysses was released by Shakespeare and Company on Joyce’s 40th birthday, February 2nd, 1922. It was issued in an edition of 1000 copies, of which our copy is 707. New York courts ruled against Ulysses‘s serialized form–published in the American magazine The Little Review–in 1921 for its objectionable content, which included descriptions of defecation and salacious details of Molly Bloom’s affair. Copies of the completed book were seized by New York customs officials in 1922 and burned. Though bootleg copies circulated in the States, the book was illegal to own. Finally, Judge John M. Woolsey ruled in 1933 that the book was not obscene, and it became available for purchase in the United States one year later in 1934 following an unsuccessful appeal by the US Attorney. Britain legalized the book after a similar ruling in 1936. SL 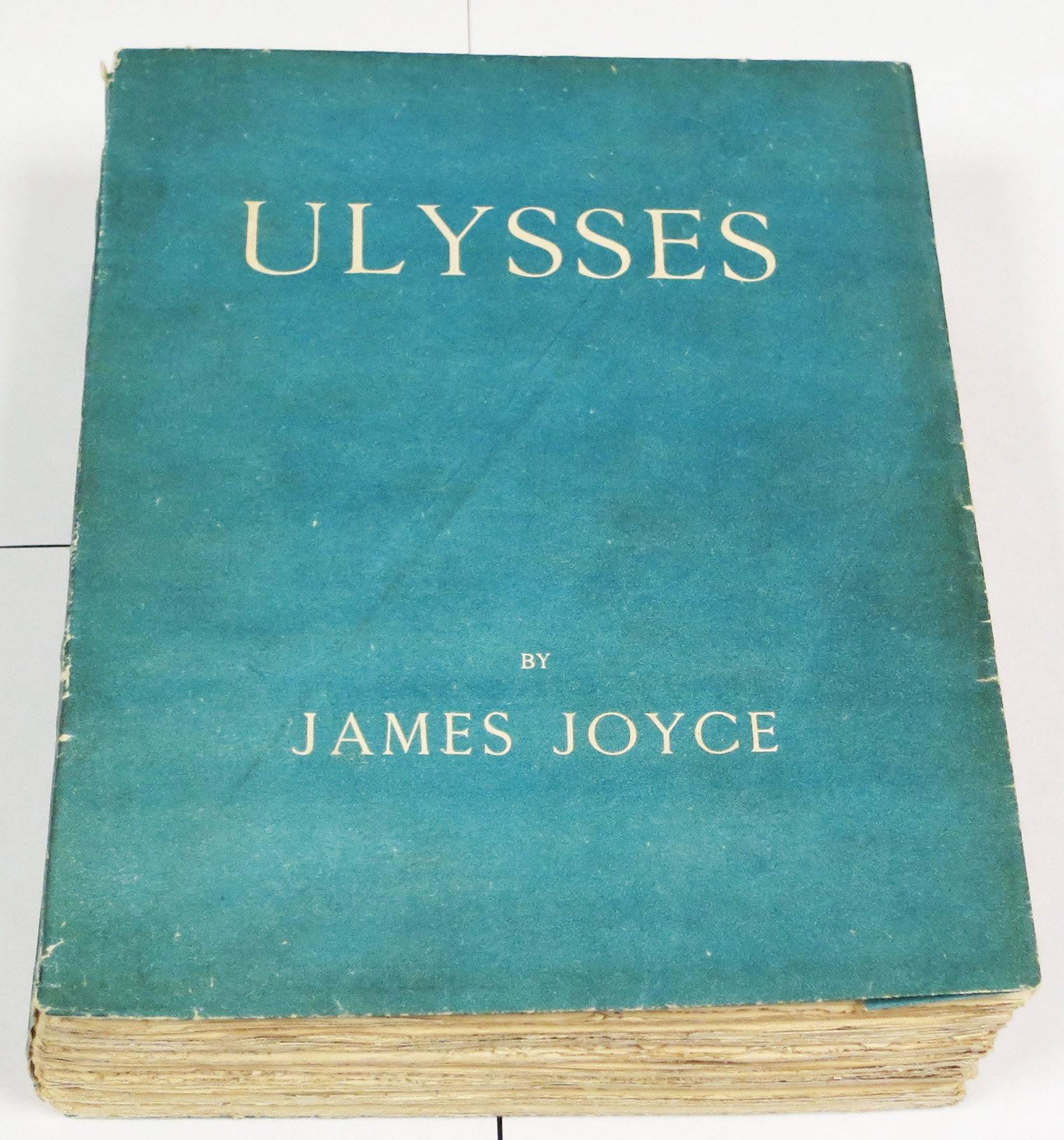