King Henry VIII and his inner circle are once again in the public spotlight with the recent American premiere of the miniseries Wolf Hall, based on Hilary Mantel’s 2009 novel. The Rare Book and Manuscript Library proudly holds a piece of this fascinating Tudor history and we’re calling on our readers to help us find out what puzzle it belongs to.

Seven years after execution of Anne Boleyn and three years after the downfall of his advisor Thomas Cromwell, the protagonist of Wolf Hall, the King married his sixth and final wife, twice-widowed Catherine Parr. The marriage occurred about 17 months after Henry had his fifth wife, Catherine Howard, executed for adultery. By most accounts, Henry’s life with Parr was happier and less tumultuous than his previous marriages, though short-lived: the King died less than four years after they were wed, and Parr never bore him any children.

Born to a noble family in northern England, Parr was well-educated and had a zeal for learning. She spoke French, Italian, and Latin, and was learned in theology. It is therefore no surprise that she turned her talents to the written word, producing an English-language translation of John Fisher’s Latin Psalms shortly after her marriage to the King. In 1544 the translation was published by the King’s printer Thomas Berthelet under the title Psalmes, or, Prayers Taken out of Holie Scripture. With the publication, she became the first Queen to have a book in print. (A later religious volume Prayers, or, Medytacions also distinguished her as the first Englishwoman to publish under her own name.) The fifteen Psalms of Fisher are supplemented in Parr’s translation by “A praier for the kynge” and “A praier for men to saie enteryng into battayle.” Parr is thought to have written the latter herself, perhaps on the occasion of Henry’s third invasion of France in mid-1544. 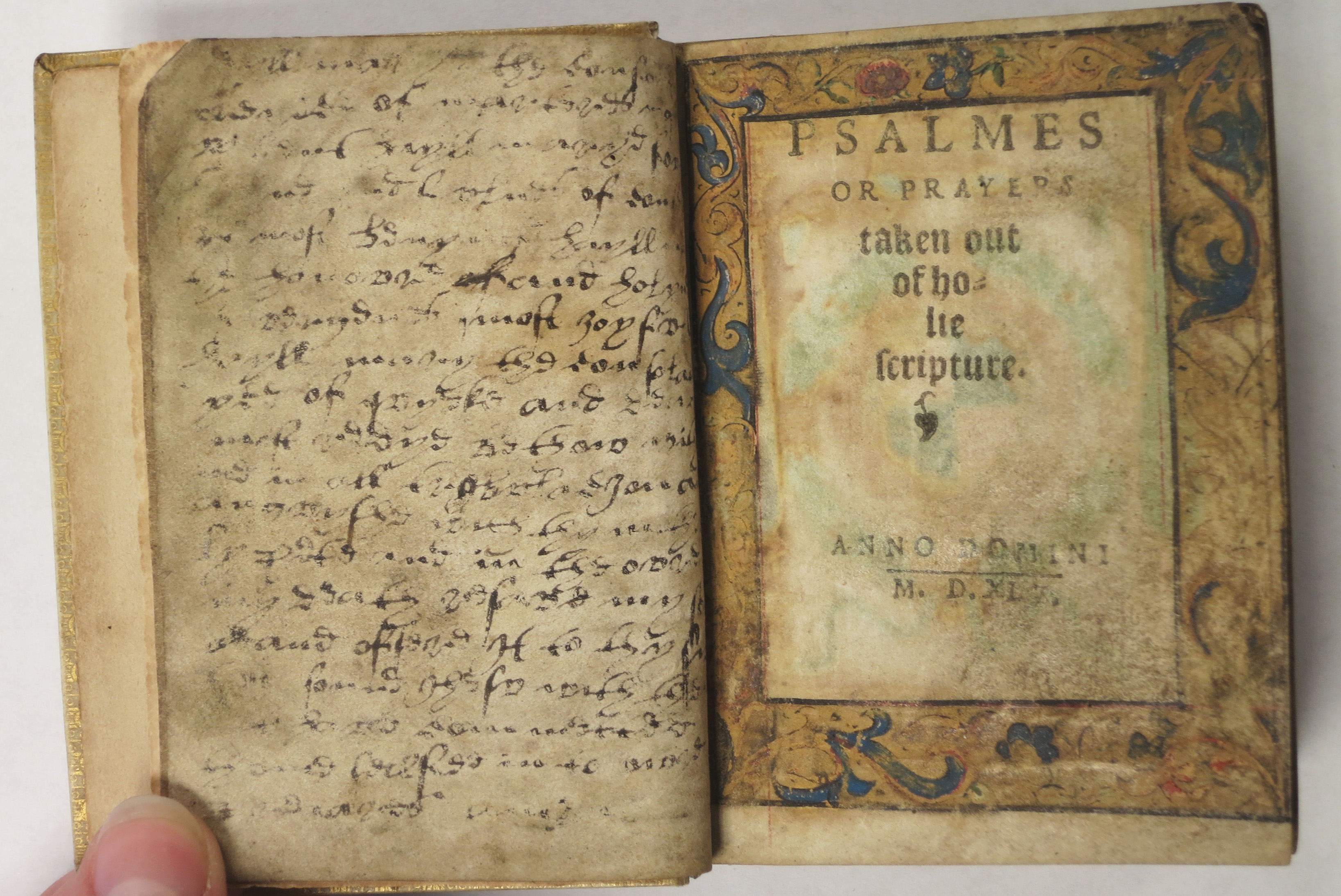 Copies of the book are scarce and it is not known how many may have been originally printed, but they appear to have been specially ordered from Berthelet in small batches at the behest of the Queen, and the surviving copies have distinct bibliographical differences. Most are printed on paper. From a bill from Berthelet dated May 1st circa 1544, we know that some of the Psalmes were “gorgiously bound” with “gilt on the letter.” A later bill tells us that other books ordered by the Queen, perhaps the Psalmes, were “printed in fine velim” [1]. Vellum was by its nature more labor-intensive to produce than paper and therefore a pricier commodity, so very few 16th-century books in England were printed on it.

Until this point, only two vellum copies of the Psalmes have been traced. One, at Elton Hall in Cambridgeshire, has annotations in King Henry’s hand and was later presented by him to his daughter Mary before he died. The other resides at Exeter College and bears the signature of William Herbert, 1st Earl of Pembroke, husband of Catherine’s sister Anne. Both were probably gifts from Catherine [2]; presentation copies were sent to several members of the Queen’s inner circle.

RBML holds a third copy, whose significance was not realized until recently. A mere four inches in height, its vellum leaves are richly illuminated. Girding the title is a faded gilt border suffused with blue scrolls and flowers. The royal arms of Henry himself are emblazoned on the title page verso. Gold lions and fleurs-de-lis once adorned its escutcheon, though only gilt traces of the charges remain. The escutcheon is encircled by a garter with the motto Honi soit qui mal y pense, which is the motto of the Order of the Garter. Above it flies a banner bearing the royal motto Dieu et mon droit. The columns and beams of the architectural border are traced with delicate veins of silver. The first letter of the book’s opening line “O lorde of lordes . . .” has within it a red Tudor rose. Other rubricated initials appear throughout 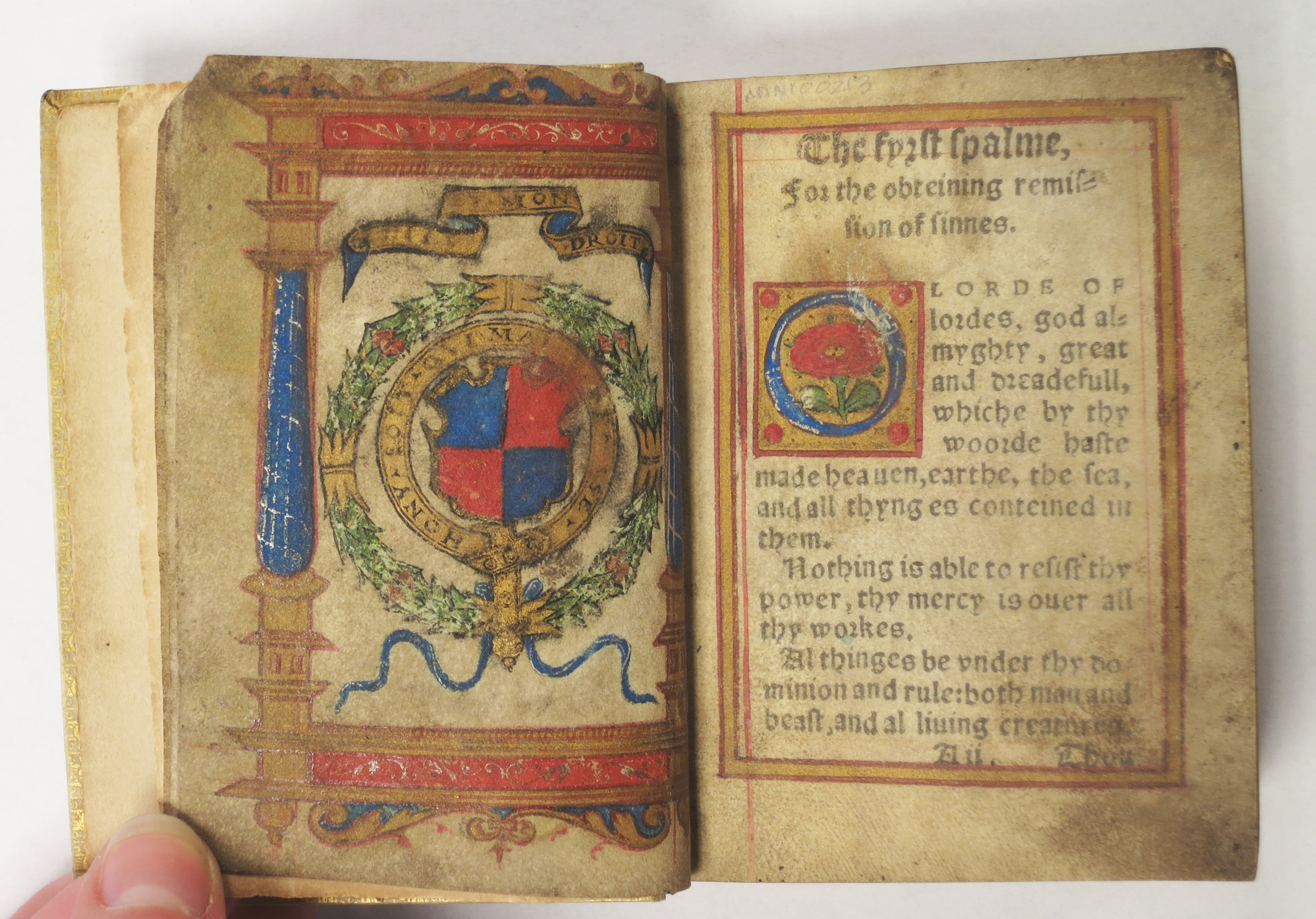 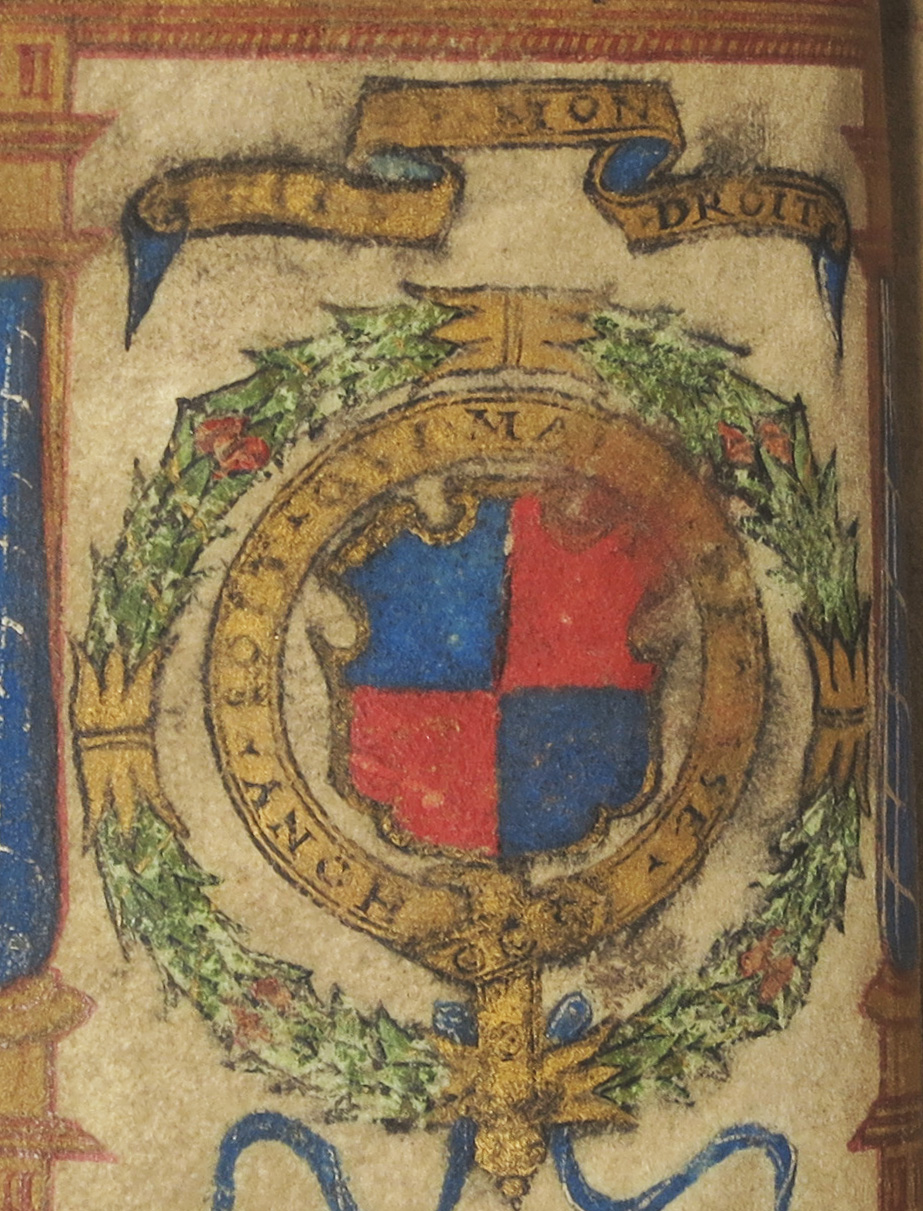 The book’s provenance is a tantalizing mystery. At one point, it was owned by members of the Pickering family. “James Pickering” is written in an italic hand on the first front flyleaf verso, then again in the margins of leaf C5r: “James Pickering booke.” “Richard Pickering” is twice written on the verso of the final leaf. James’s hand would seem to date from the early to mid-17th century, while Richard’s inscription is earlier–from the late 1500s, perhaps. There is also a couplet, visible only under ultraviolet light, in the margins of the last leaf. It reads: 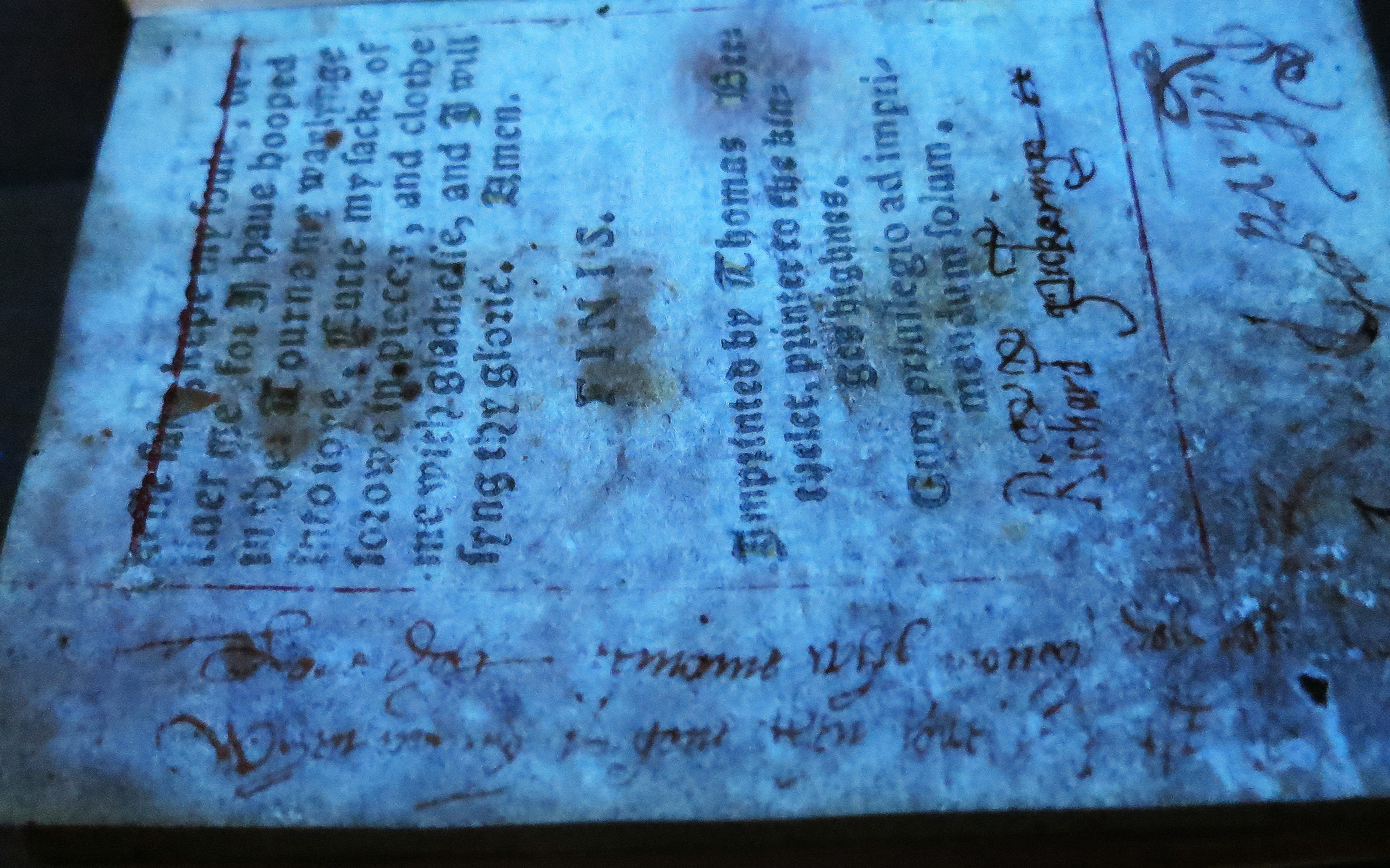 Who the Pickerings are and whether they had a connection with Henry’s court is unknown. The earliest inscription occurs on leaf D1r. The first name is, quite clearly, Henry. The surname–if it is a surname–is harder to make out. The final three letters are “-rry.” It is preceded by another word ending in “-nn” or “-m.” One possibility is “Carry.” 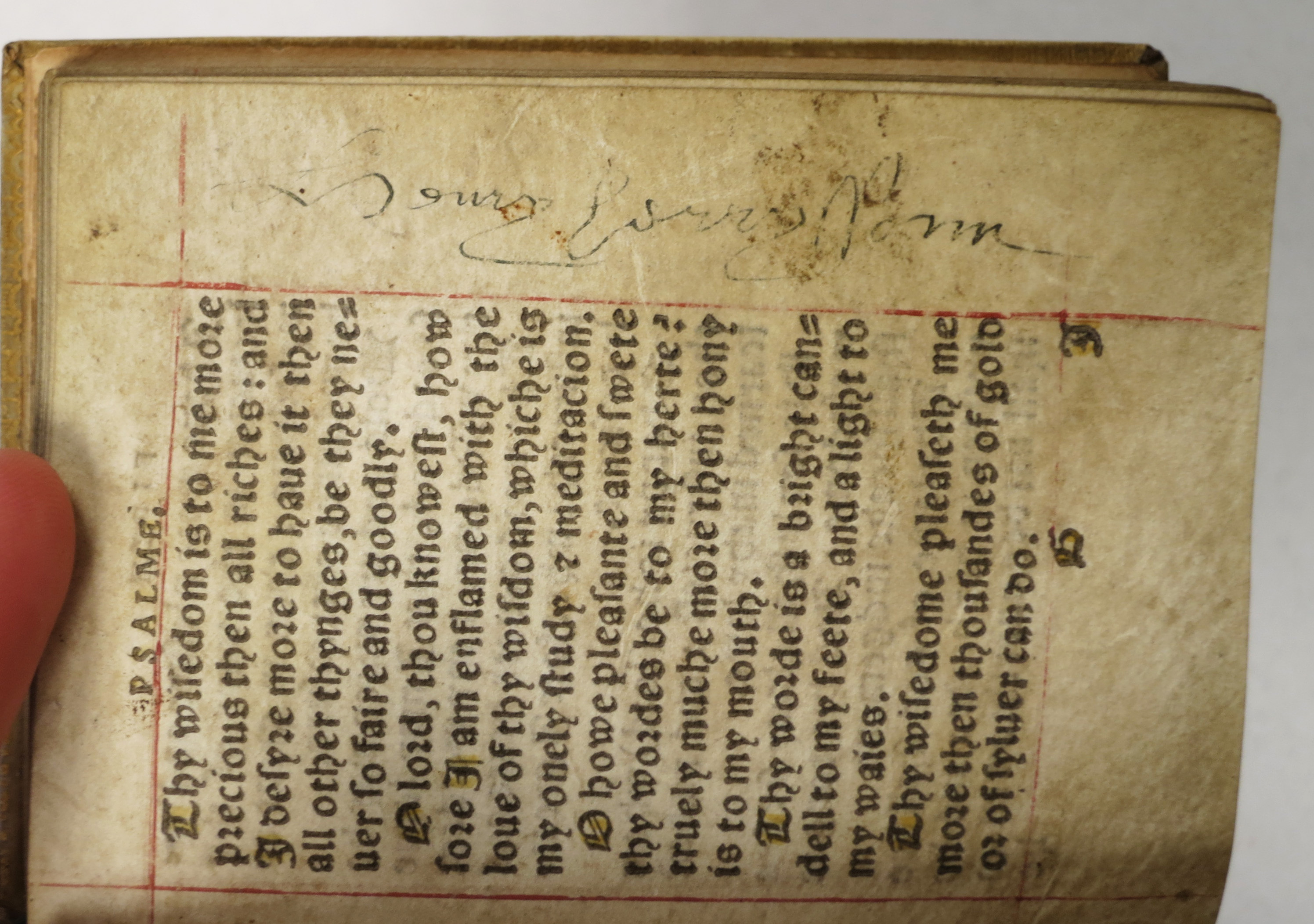 Henry Carey, 1st Baron Hunsdon, is a plausible candidate for one of Parr’s lavish presentation copies of the Psalmes. He was the son of one of Henry’s favorite attendants and courtiers, William Carey. His mother was Mary Boleyn, sister of Anne Boleyn and Henry’s mistress for several years. In fact, there is still some debate over whether Henry Carey was the illegitimate child of Henry and Mary, though many historians think this is unlikely due to Henry’s desperation for an heir and the recognition he paid to his illegitimate son, Henry FitzRoy. In Wolf Hall, Mantel has Mary Boleyn speculating that the reason her son remains unacknowledged as the King’s is because Anne Boleyn assumes she will give the King male heirs and thus does not want any competition from her nephew. 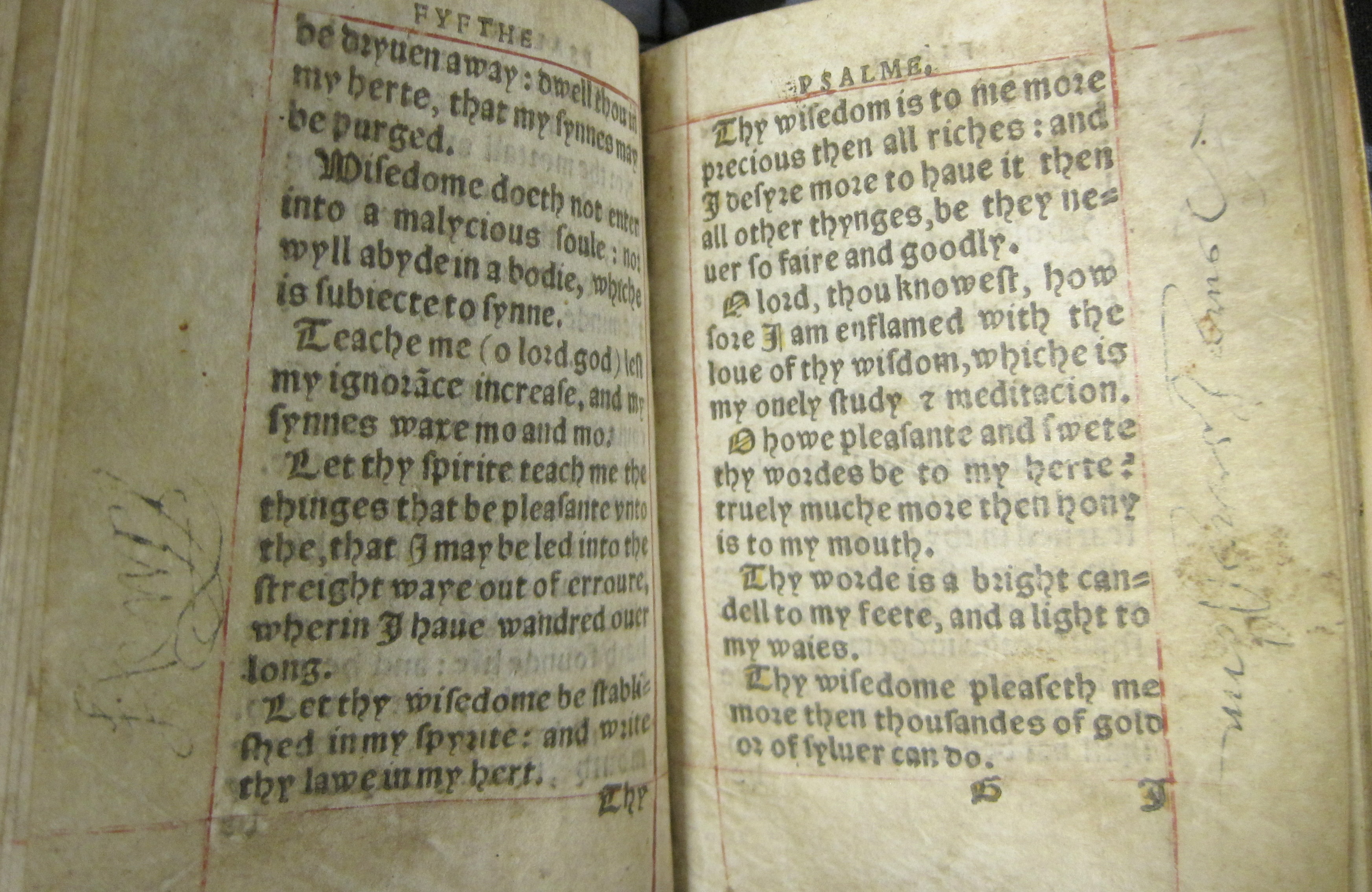 Henry Carey was married in May 1545, to Anne Morgan. It is conceivable that the book could have been presented to him as a wedding gift, though it does not bear any annotations to that effect, at least any that survive; the book is lacking the blank rear fly-leaves and perhaps a front fly-leaf or two. “Henry” is also written in different script, though not necessarily a different hand, on the page opposite the possible “Carry” inscription.

Finally, there is a leaf, somewhat faded, of devotions in an early hand at the front of the book. Though we have not fully transcribed it, certain phrases stand out: “hayll marye”; “most noble”; “holy gost”; “most desyrable.” Could they have been written by Henry or Catherine? We open up the question to our readers. We also welcome suggestions on the Henry inscription and information about Richard or James Pickering. SL 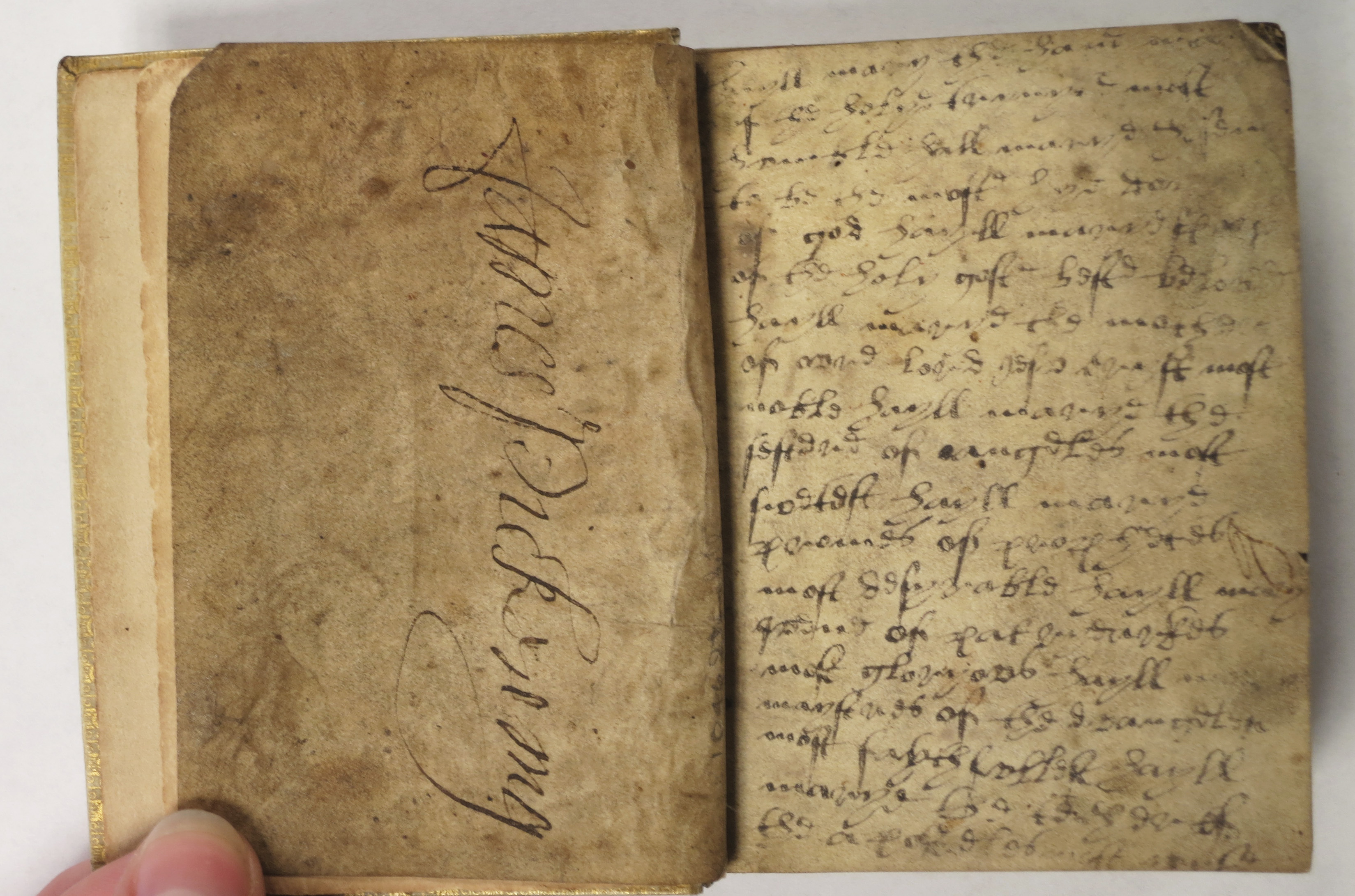 3 thoughts on “Help Solve a Tudor Mystery at RBML”