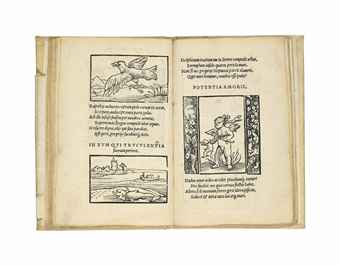 The Rare Book & Manuscript Library of the University of Illinois at Urbana-Champaign has recently acquired the first cookbook devoted to pastry making. Le Pastissier françois (The French Pastry Chef), published in 1655 by the great Dutch printing house of Elzevir, is a landmark in the history of cooking and cookbooks. The book is often attributed to François Pierre de la Varenne (1615-1678), the father of French gastronomy and author of the first French cookbook (Le Cuisinier françois, 1651). He was also the first to break with Italian practices, concocting such staples of French cooking as Béchamel, hollandaise sauce, and bisque. Le Pastissier françois is equally revolutionary in the history of cooking for establishing most of the foundations of French pastry making. For example, here for the first time, we find an explanation of the now universal way of making flaky pastry dough by weaving together butter and flour. The author also introduces such classics of French baking as beignets, chansons aux pommes (apple turnovers), choux pastry (used for éclairs), and gaufres (waffles), as well as the very first recipes for a cake (gateaux) and an apple pie (!). In addition to these innovative sweet confections, Le Pastissier françois offers recipes for savory pastries as well.

Groundbreaking in many ways, Le Pastissier françois is the first cookbook to indicate precise measurements and quantities for each ingredient, the first to give exact cooking times and heat levels, and the first to include an alphabetic index to the recipes.

The book was printed by Louis and Daniel Elzevir in 1655, the third generation of the great Elzevir printing house in Amsterdam. Le Pastissier françois has been called “the most sought after of all Elzevir imprints,” chiefly because of its rarity. Like hymnals and children’s books, cookbooks are printed to be used (and abused) and therefore have poor survival rates. Indeed, in the nineteenth century, the Elzevir Le Pastissier françois became a kind of Holy Grail for collectors and the price skyrocketed accordingly, leading several English and French authors to comment admiringly or sarcastically upon the phenomenon. Alexandre Dumas, for example, claims to have been distracted from a play by the incredible sight of a man reading a copy of Le Pastissier nearby, and several English novelists list this title when describing the grandeur of character’s library. When J.P. Morgan died, the New York Times mentioned about a dozen of the highpoints of Morgan’s collection, listing the Elzevir Le Pastissier françois alongside the Golden Gospels of Henry VIII, the Gutenberg Bible, and the manuscript of A Christmas Carol by Charles Dickens. There appear to be fewer than a dozen recorded copies, most of them outside the U.S.

One thought on “Yummy Acquisition”