A visit to our library by the Urbana High School French Club this past spring sent me to the Rare Book & Manuscript Library vault in search of materials from the French Revolution era. On this Bastille Day week-end, let’s take a look at some of my (re)discoveries.

This slim publication, also known as Constitution de l’An I (Constitution of the Year I) contains an expanded Declaration of the Rights of Man and of the Citizen that adds several rights to the text from 1789, such as the right to work and to public assistance, the right to public education, the right to rebel, the duty to do so when the government violates the right of the people, and the abolition of slavery. Although it was ratified, the Constitution of 1793 was never put into effect as the National Convention set it aside in October 1793, until exterior and interior wars ceased and peace came. Two years later, the Constitution of the Year III (1795) marked the beginning of the Directory. While it was never implemented, this seminal document inspired subsequent generations of revolutionaries and legislators, well into the 20th century.  It can be found under call number 342.442F83521793. 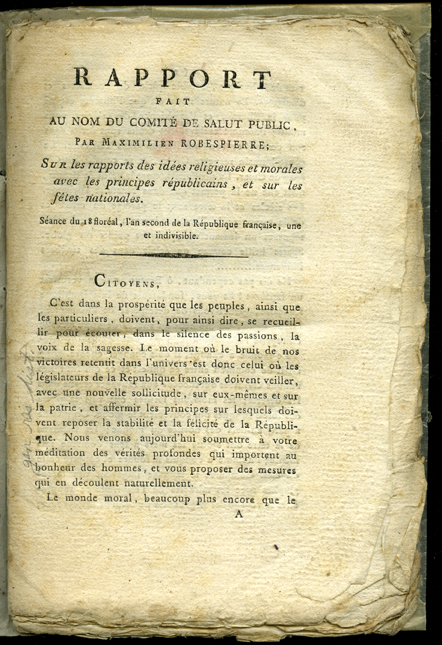 This report on the relationship between religious and moral ideas and republican principles, and on national celebrations, which was immediately adopted by the National Convention, opens with the statement that “the French people recognize the existence of the Supreme Being and the immortality of the soul”. It establishes a series of republican virtues to be celebrated on each “Décadi”, the last day of each decade or ten-day period, which had replaced the seven-day week in the revolutionary calendar that went into effect in October 1793. In addition to the “weekly” celebration, the report establishes four national celebrations to commemorate 14 July 1789 (Bastille Day), 10 August 1792 (end of the Bourbon monarchy), 21 January 1793 (execution of Louis XVI), and 31 May 1793 (fall of the Girondist faction), as well as a national celebration of the Supreme Being. Jacques Louis David, the politician and painter, wrote a detailed and very enthusiastic plan for the first celebration which is appended to the report. 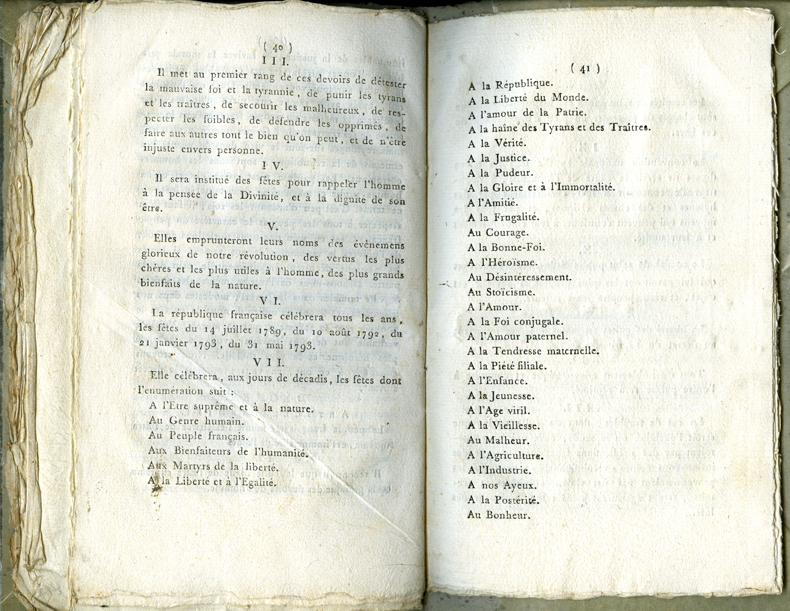 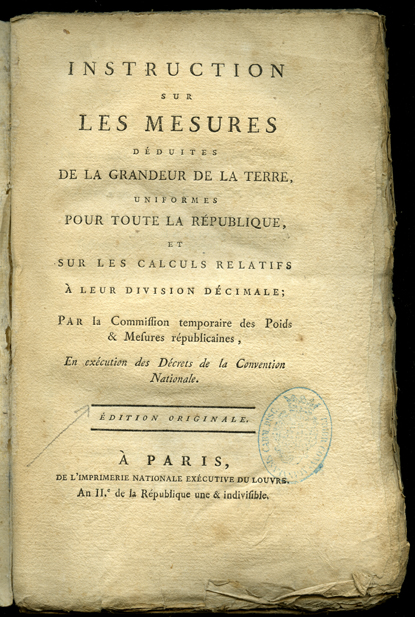 This volume introduces a stable, simple and uniform system of measures to be used across the French Republic, established by a Temporary Committee of Republican Weights and Measures, presided at the time by René Just Hauÿ (whose works on crystallography were highlighted in a recent exhibition in the Rare Book & Manuscript Library: Crystallography—Defining the Shape of Our Modern World. (Curators: Gregory S. Girolami and Vera V. Mainz) 30 April through 13 July, 2012.). This decimal metric system was to be applied to all areas of measurement, including time. Days were to be divided in 10 hours of 100 minutes, and each minutes divided in 100 seconds. While the length, volume and weight measures spread throughout Europe during the 19th century, the proposed division of time was never implemented. 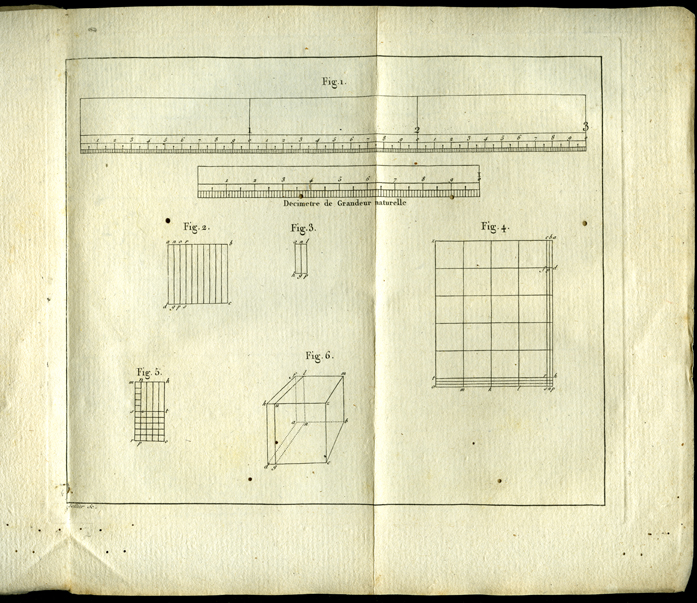 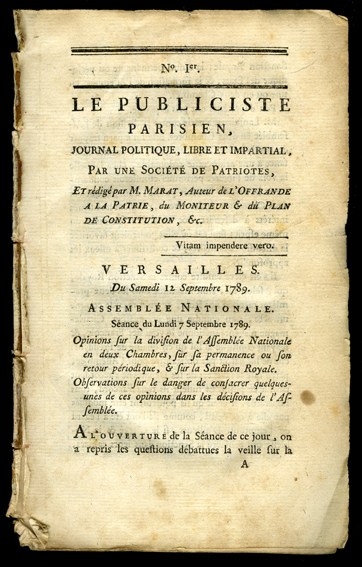 Jean-Paul Marat (1743-1793), a physician and scientist turned radical journalist and politician during the French Revolution, whose assassination by Charlotte Corday was depicted by another famous revolutionary, the painter Jacques Louis David, first published on 12 September 1789 Le Publiciste parisien. The publication became most famous under the title it acquired after the first few issues: L’Ami du peuple (the Friend of the People), which came to designate both the journal and its author. The title varied, changing after some time to Journal de la République française and Le Publiciste de la République française. The Rare Book & Manuscript Library owns five hundred issues out of the nearly thousand issues published between 1789 and Marat’s death on 13 July 1793. These issues were bound in several volumes, and then disbound, except for one volume. They can be found under call numbers IUB 01044 through IUB01049.

In the fall of 1789, another young journalist and famous orator of the Revolution, Camille Desmoulins (1760-1794) started Révolutions de France et de Brabant, a weekly journal in which he shared his views on prominent political figures of the time and on many debates of the new National Assembly. This title was published in 86 issues from 28 November 1789 until July 1791. The Rare Book & Manuscript Library has issues 1-71 (call number 905REVF).

La Gazette nationale, ou le moniteur universel, created by Charles-Joseph Panckoucke (1736-1798), the publisher of l’Encyclopédie méthodique, which had succeeded Diderot’s famed Encyclopédie. From the first issue on 24 November 1789, the Gazette included complete transcripts of the debates of the Assembly, with the help of stenographers, making it an invaluable source for historical research. It became the official publication of the government in early 1800 and lasted until 1901.

As early as 1790, the Gazette became so popular that Agasse, an associate of Panckoucke, issued a new “historic” edition, which he had start on May 5, 1789, the opening day of the General Estates! These apocryphal issues misled some generations of historians and tarnished the reputation of the whole publication, which may explain why relatively few copies were preserved to this day. The History, Philosophy and Newspaper Library owns a copy, found under call number 905MONA, from 1789 until 1868, which includes the early apocryphal issues.

Massacre Of The French King!: View Of La Guillotine, Or The Modern Beheading Machine, At Paris, By Which The Unfortunate Louis XVI. (late King Of France) Suffered On The Scaffold, January 21st, 1793. London : Printed At The Minerva Office, For William Lane. And Sold Wholesale At One Guinea Per Hundred. And Retail By Every Bookseller, Stationer &c. In England, Scotland And Ireland, [1793]. 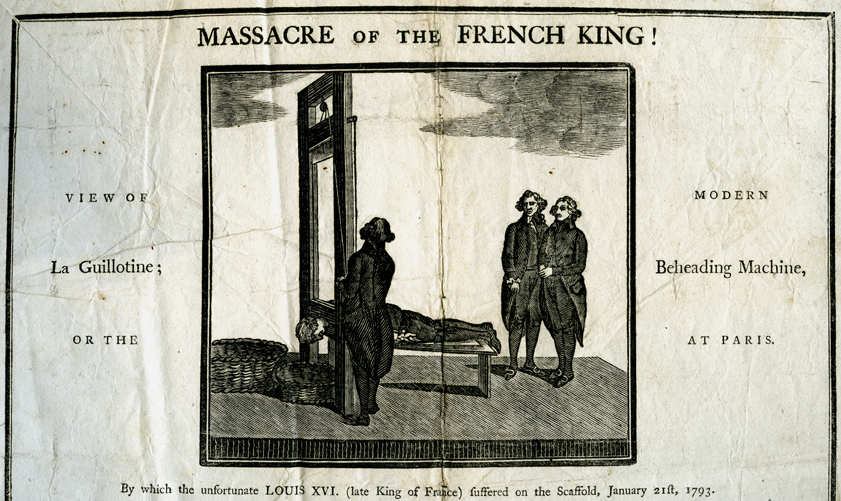 Woodcut illustration from Massacre of the French King!

This British broadside, which appears to marvel at technological progress (“The Modern Beheading Machine”) at the same time that it decries the execution of Louis XVI, offers a translation of the decree of the French National Convention from 15, 17, 19, and 20 January 1793 setting forth the execution: “Louis Capet, last King of the French, having been found guilty of conspiracy against the Liberty of the Nation, and of a crime against the general Safety of the State (…) shall undergo the punishment of Death.”

The decree is followed by the report of the council who communicated the decree to Louis, Orders for the Day (“The execution shall take place Monday the 21st, at La Place de la Révolution, ci-devant Louis XV”), and a full account of the procession and the execution. A note at the bottom of the broadside indicates that “a more particular account of this machine may be seen in Twiss’s Trip to Paris, lately published”.

Richard Twiss (1747-1821) provides vivid tales of executions with the guillotine, as well as a history and description of beheading machines, in his account A Trip to Paris in July and August, 1792 (London: Minerva Press, 1793) and points his readers to several publications where illustrations can be found. His own book opens with a frontispiece depicting an execution. The execution of Louis XVI in January 1793 provided him with a unique opportunity to advertise his book…

One thought on “Heads Will Roll! Echoes of the French Revolution in the Rare Book & Manuscript Library”