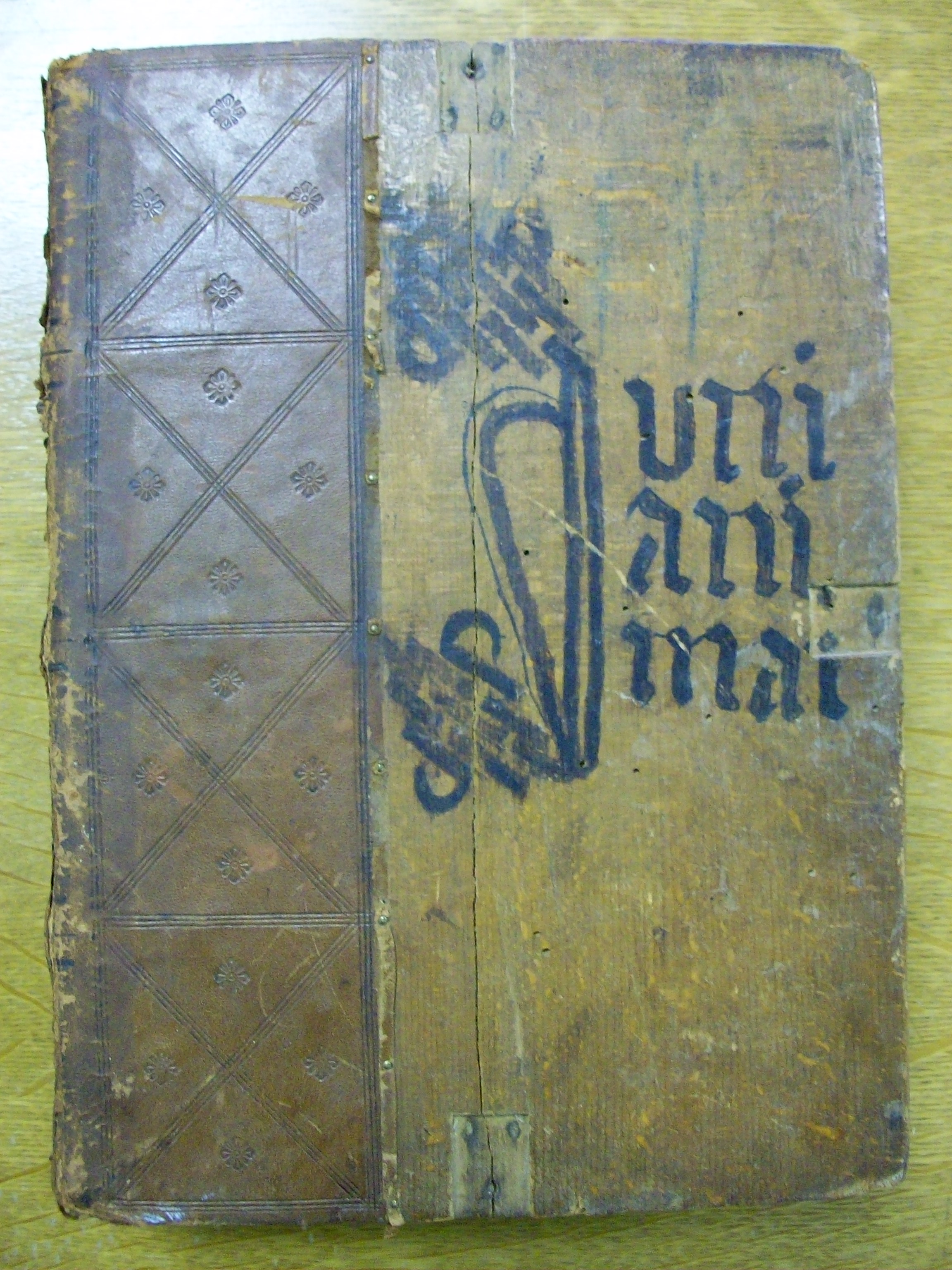 While cataloging a copy of De priscorum proprietate verborum (“On the propriety of ancient words”) by the 15th-century Neopolitan grammarian Guiniano Maggio, I came across two contemporary or near-contemporary ownership inscriptions by one Ludovicus de Galliardis. 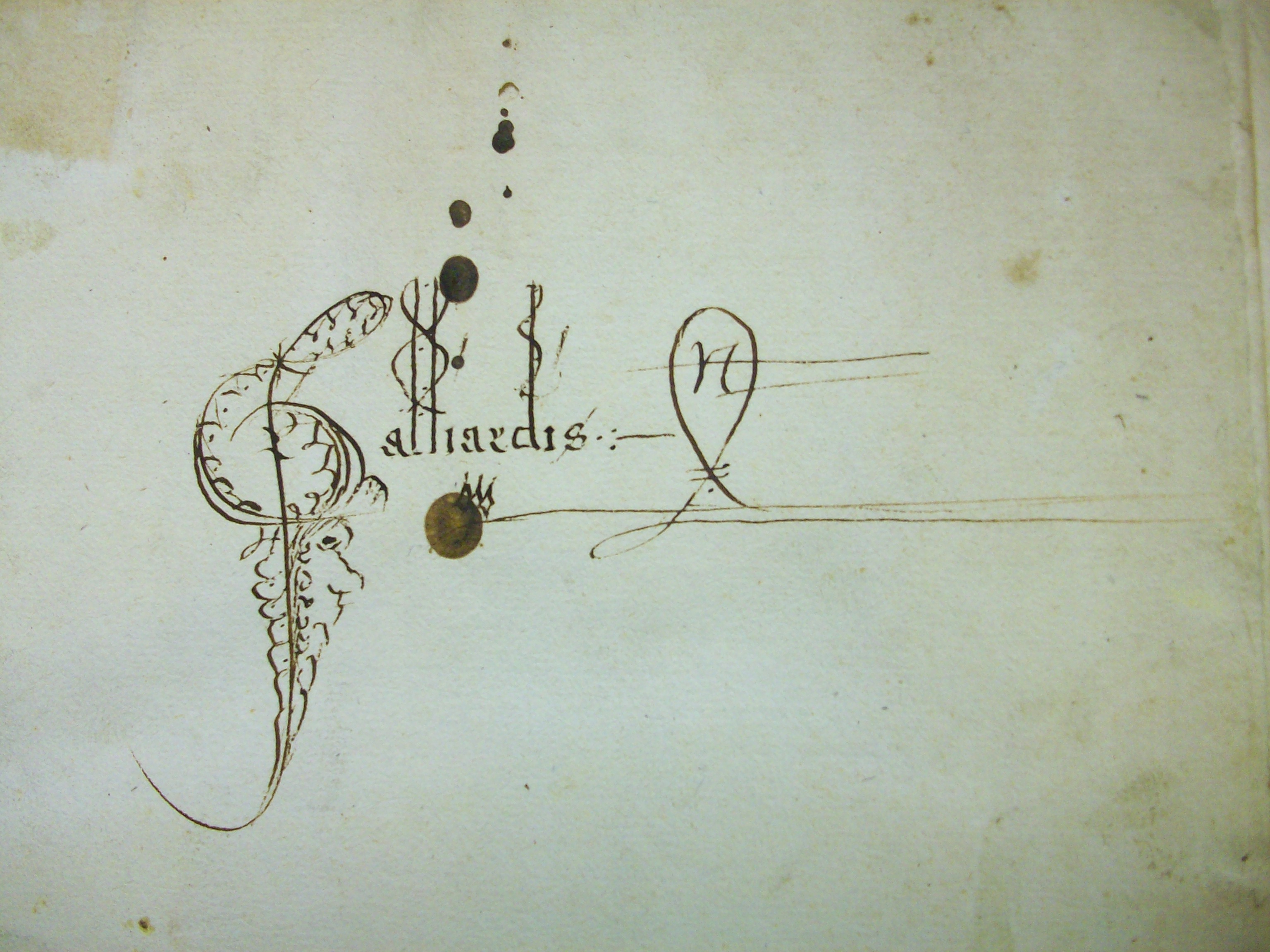 One inscription is on the first front fly-leaf recto and comprises the name “Galliardis”, embellished with swoops and curves of pen-work. A face is incorporated into the descender of the capital “G”, and through this clever addition, the initial letter is transformed into a large and ostentatious piece of head-gear, similar to those seen in late medieval panel and manuscript paintings. Another elaborate symbol follows, but I have been unable to determine what this signifies, if anything. It could be another sign of ownership, perhaps incorporating the letters “r” and “t” within a larger initial “I”, but it is hard to tell.

Galliardis made his mark again, this time on the last printed leaf in this volume (M5 recto). Here he chose the odd course of writing the Latin phrase “Ludovicus de Galliardis possidet istum librum” (“Louis de Galliardis owns this book”) in Greek characters. The writer did not mind that several of the Greek letters do not transliterate properly into the Roman alphabet. Instead, he chose letters that looked like their Roman counterparts. For instance, the letter “e” appears twice in this inscription and both times it is represented by the lower-case form of the letter “zeta”, which, of course, corresponds to the Roman “z”, not “e”. Obviously, this Galliardis was an artistically-inclined man who had a grasp on classical languages as well as a quaint sense of humor.

These characteristics may be accounted for if he is one and the same with an “egregius Ludovicus Galliardi, notarius” (“the distinguished Louis Galliardi, notary”), named as a citizen of the town of Annecy in the Haute-Savoie region in south-eastern France. This comes from an entry, dated 6 October 1538, in the minutes of Pierre Deserveta now in the Archives du Départment de la Haute-Savoie. This date fits with the type and style of the inscriptions found in the incunabulum. If indeed the owner of this volume was a notary, then this would explain the elaborate script and the knowledge of Latin, as well as at least some Greek. This also justifies the calligraphic inscription “Juniani Mai[i]” (“Guiniano Maggio”) on the upper wooden board, which has an elegant “J”.

Further documentary evidence points to the possible existence of a family of notaries by the name of Galliard or Galliardi in the area spanning several centuries. The same Pierre Deserveta, in a passage from his minutes dated 12 February 1557, says that one Marin Ruffi was taken into a two-year apprenticeship by Jacques Galliard, notary and citizen of Annecy, to be taught “l’art d’escripture”. Additionally, there was a Johannes or Jean/Jehan Galliardi, also a notary, who is named in two documents from Geneva (some 40 kilometers from Annecy), dated 1464 and 1473, respectively. A manuscript on parchment, dated 20 May 1709, documenting the donation of 10 écus by Jean Dupont to the chapel of Sainte-Marie-aux-neiges in the hamlet of Les Jeurs in exchange for an annual mass to be celebrated there, was drawn up and signed by “Petrus Georgius Galliard, notarius publicus” (“Pierre-Georges Galliard, notary public”) at his home in the town of Martigny-Bourg in the modern-day canton of Valais in Switzerland. His signature is elegant and flowing, reminiscent of those in the 1482 Guiniano Maggio, though indeed these are in the same style as was used by many notaries, secretaries, and other “professional writers” over the centuries.

Geneva and Martigny-Bourg are just over 100 kilometers apart, and so it seems that, over the course of around 250 years or more, there were at least four notaries (Jean/Jehan, Louis, Jacques, and Pierre-Georges) with the name of Galliard or Galliardi in the Haute-Savoie/Geneva/Valais area. How these men were related, if they were at all, is unknown and would take a great deal of investigation to determine.

We are seeking any information that might help to shed light on the Galliard family or on the significance of the mysterious flourish in the first inscription. If you have any suggestions please contact the Non Solus blog moderators or the Rare Book & Manuscript Library. TB

One thought on “Distinctive Ownership Inscriptions in an Incunable (Incunabula Q. 473 M28p 1482)”