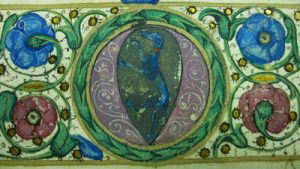 While cataloging an Italian edition of St Augustine’s De civitate Dei, I was pleasantly surprised to come across a beautiful illumination.  The table of contents makes up the first ten leaves of this volume, but the opening page of the text proper (leaf a1 recto) displays a stunning hand-painted border and initial “E”.   The border is made up of foliage, pink and blue flowers, and fruit, and is ornamented with black penwork and tiny dots of gold leaf.  The two columns of text are divided by a foliate column, and the initial, which is set in a ground of gold leaf, continues this leafy motif.

The most fascinating and mysterious element of this illumination lies at the foot of the page, where a circular wreath encloses an as-yet unidentified heraldic crest.  Within this roundel—surrounded by a pink, ornamental ground—is a tear-shaped escutcheon argent with a greyhound rampant azure collared gules.1

A cursory investigation has turned up few clues as to whose crest this could be.  A March 1887 catalog of the library of former Union General Rush C. Hawkins (1831-1920) lists a copy of Aquinas’ Summa contra gentiles (Venice: Nicolas Jenson, 1480) and remarks that “[t]he recto of the fifth leaf has a large capital in blue and at the bottom of the same page, in colors, the arms of a former owner:– ‘Argent a greyhound rampant azure’”.  I have been unable to track this copy to its modern-day owner.  Much of General Hawkins’ large book collection, including his incunabula, is now held by Brown University as part of the Annmary Brown Memorial collection, set up in memory of Hawkins’ wife after her death in 1906.  Unfortunately, the copy of the 1480 Summa contra gentiles at Brown does not correspond to the one in the catalog.  Both the Augustine and the Aquinas date from the same period and were possibly published in the same city.  These two copies could very well have been in the possession of the same 15th-century owner who had them adorned with his arms.  This is impossible to determine unless the whereabouts of the Hawkins copy become known.  Perhaps there are more incunabula in institutions and private collections around the world with this same crest, waiting to be discovered.

This volume also has a manuscript note on the second front fly-leaf verso stating that this copy was “Bought at the Marquis of Hasting’s sale for £. 10. 10. 0.”  This is presumably the sale of 1868, after the death of the 4th Marquess.  It was acquired from Stonehill Books in 1949.

It is bound in 18th-century light-brown calf with gilt tooled and stamped boards and spine, and has the spine title: “S. Agostino – Della citta di Dio”.

We are seeking any information that might help to identify the owner of this crest or the present-day location of the copy of Aquinas mentioned in the 1887 catalog.  If you have any suggestions please contact the Non Solus blog moderators or the Rare Book & Manuscript Library. TB

Updated on August 4, 2017 by Chloe Ottenhoff