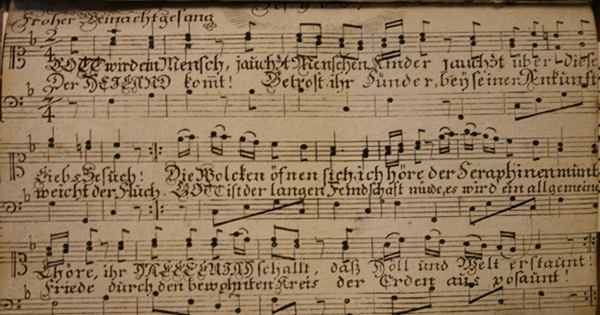 A collection of German Christmas songs (call number IUA15239) from the library of Richard Aron passed through Quick and Clean Cataloging a few months ago. This Sammelband contains 38 pamphlets published between 1774 and 1828. Most of the pamphlets are only two to four leaves in length and contain the lyrics to German Christmas and New Year songs. The pamphlets are all printed in a simple manner and were produced in Berlin. These pamphlets may have been collected by a single individual at Christmas masses over the years and later bound together in paper-covered cardstock boards.  An illegible ownership inscription appears on the title page of the first work and is dated Berlin, 1835. This pamphlet collection would provide a wealth of information to anyone studying the history of popular culture, music, or religion in Germany in the late-eighteenth and early-nineteenth century.

In 1913, the University of Illinois library purchased approximately 20,000 volumes from the library of the Berlin elementary school teacher Richard Aron. Richard Aron (1854-1912) collected books pertaining to education in Europe and especially in Germany. Aron is one of many German collectors whose collections the University purchased from the late-nineteenth to mid-twentieth century.  The acquisition of the collections of these German and German-American collectors and scholars such as Karl Dziatzko, Johannes Vahlen, and Heinrich Armin Rattermann greatly strengthened our holdings of German-language materials. AD