The Rare Book & Manuscript Library recently discovered that we hold a complete set of the Dobell catalogs, which appear to have been owned by the Dobell family.  On 16 July 1956, Gordon N. Ray purchased 22 volumes of the catalogs from Days Bookshop in England.  These volumes are uniformly bound in three-quarters brown goat and have four raised bands and four gilt-stamped fleurons on the spine, in addition to the gilt titles.  Bertram Dobells signature appears on the front free endpaper verso and below it, inscribed in pencil in a similar hand, is the note: Not for sale.  The catalogs may have been sold to Days Bookshop following the death of Percy J. Dobell on 23 January 1956.  A printed remembrance of Percy J. Dobell is tipped-in at the beginning of the 8 Bruton Street catalogs for 1921-22.  The catalogs are largely unmarked, but a few have information regarding their exact date of publication and the number of copies issued inscribed in both pencil and ink at the top of the first page.  The library also owns four further volumes of Dobell catalogs bound in library buckram, catalogs which may have been purchased by Gordon Ray at the same time, but in an unbound state. 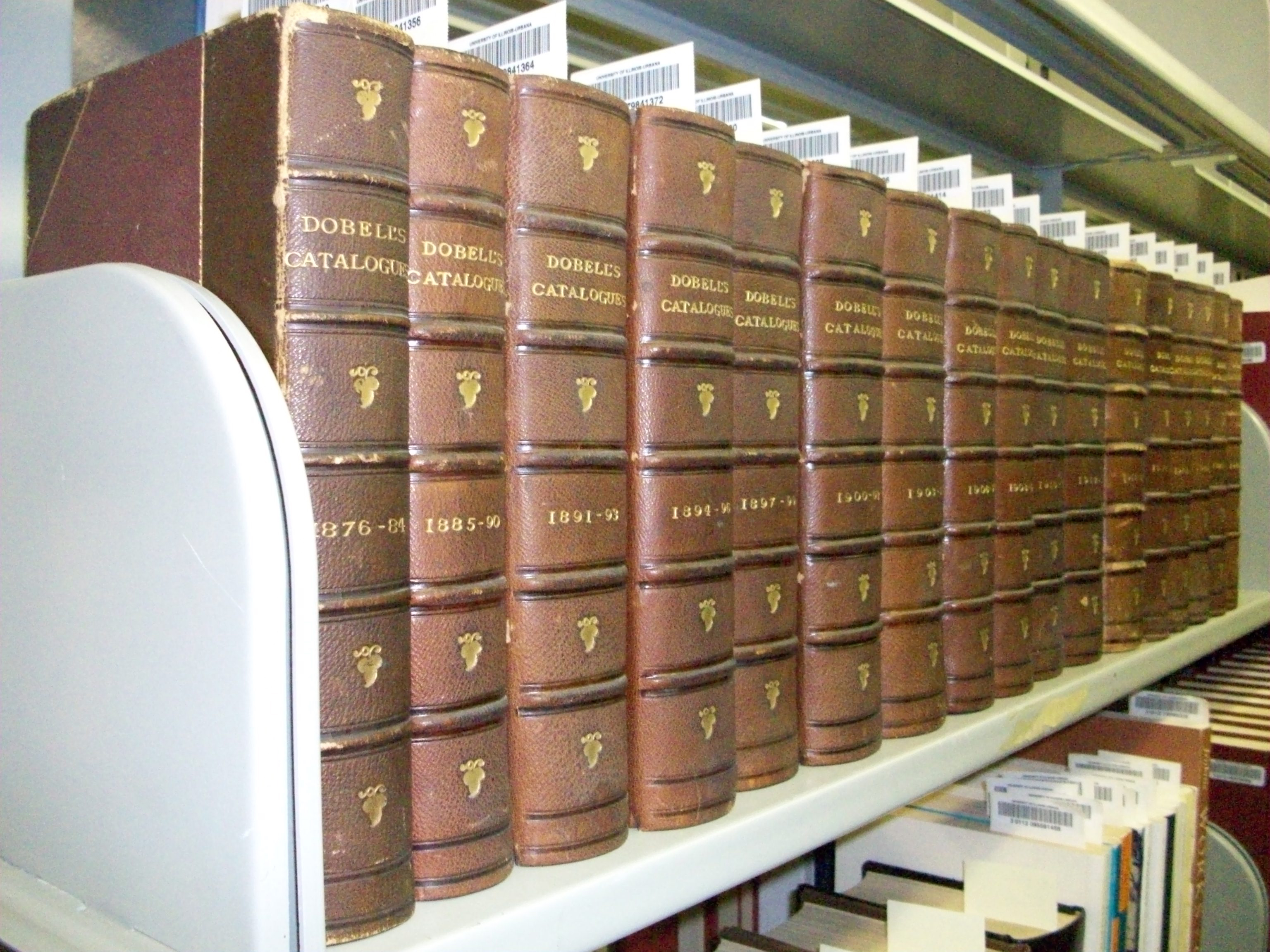 Bertram Dobell (1842-1914) was a London bookseller and scholar who issued his first catalog in 1876 and had issued 237 more before his death in 1914.  At his death, his sons Percy and Arthur carried on the business under the name of P.J. & A.E. Dobell until their partnership was dissolved in 1946.  At that point, Percy took full ownership of the Tunbridge Wells shop and Arthur the London shop.

The Dobell family ran their bookselling business from several locations in London and then Tunbridge Wells throughout the 19th and 20th centuries.  Bertram Dobell’s first shop was located at 62 Queen’s Crescent.  In 1887, the business moved to 54 Charing Cross, and in 1894, a second London shop was opened at 77 Charing Cross.   In 1921, a location at 8 Bruton Street replaced the shop at 54 Charing Cross, and in 1934, a location at Tunbridge Wells replaced the Bruton Street branch.

Several series of catalogs were issued by the Dobell family under various names and from various different locations, and as are follows:

Bertram Dobell’s archive is located at the Bodleian Library and the discovery of the location of these catalogs adds significantly to the amount of material available for the study of the Dobell family and the London book trade.  Gordon N. Ray (1915-1986) was a professor of English at the University of Illinois beginning in 1946 and was a major influence on special collections at the University.  In the summers of 1950-57, Ray went on book-buying trips to England for the University.  He was responsible for purchasing the H.G. Wells collection, the archives of the British publishers Grant Richards and Richard Bentley, and also the Tom Turner Collection of Victorian literature.  These rediscovered catalogs further support Ray’s stature as an important and forward-thinking collector of English literature. AD