It is with great excitement that we announce the discovery of an Italian copy of Dante Alighieri’s Divina Commedia (Firenze: Felice le Monnier, 1844) bearing Cyprian Norwid’s ownership inscription and his presentation inscription to a Polish emigre in the United States.

Cyprian Kamil Norwid (1821-1883) was a Polish poet, dramatist, painter, and sculptor. He belonged to the second generation of Polish Romantic poets. After the rediscovery of his work by the Young Poland (Mloda Polska) movement of the early twentieth century, he became known as the “fourth bard” of Polish literature, to denote his status as an equal to the traditional “three bards” or “trzej wieszcze” of Polish literature: Adam Mickiewicz (1798-1855), Juliusz Slowacki (1809-1849), and Zygmunt Krasinski (1812-1859). Another indication of his great stature in Polish literature and culture is the fact that on the 180th anniversary of Norwid’s birth, Pope John Paul II delivered an address praising Norwid’s work to the representatives of the Institute of Polish National Patrimony. 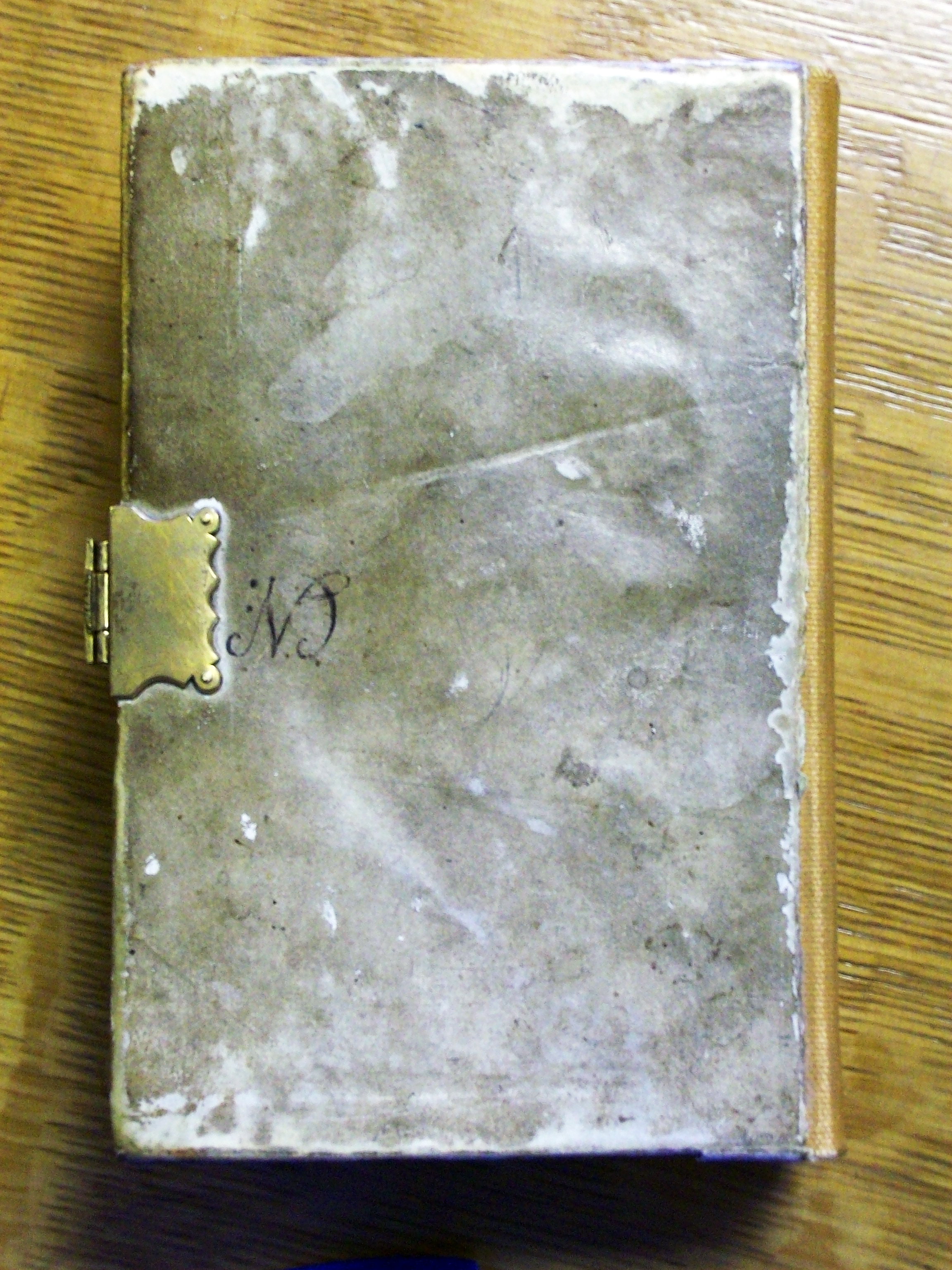 English-language audiences are only now becoming familiar with the work of this forward-looking nineteenth-century poet. It was only in the last decade that two collections of his writings were issued in an English translation: Selected Poems (London: Anvil Press, 2004) and Poems, Letters, Drawings (Manchester: Carcanet, 2000). His work has also been praised by the literary critics Roman Jakobson and Czeslaw Milosz.

Norwid’s early years were marked by his study of the visual arts, the pursuit of which cut his formal education short. Throughout the decade of the 1830s and until his departure for Germany in September 1842, Norwid studied art in Warsaw. The years 1843-44 found Norwid in Florence studying sculpture and art history. In 1845 he studied archaeology in Rome and then moved on to Berlin, where he was arrested in 1846 for giving his passport to a Russian deserter. In the following years he lived in Brussels, Rome, and Paris. In 1853, Norwid traveled further afield to the United States to take a job as an artist. He returned to England in July 1854 and then proceeded on to Paris, where he lived for years in poverty and ill health until he died in the Saint Casimir Asylum, a Polish-run nursing home, in 1883 (Gömöri 11-12).

During these trying years of exile, poverty, and health problems, Norwid was busy creating an impressive body of literary work. An 11-volume edition of his collected writings and artwork entitled Pisma Wszyztkie (Writings of All) was issued in 1971-76. Among his epic poems, “Promethidion”, “Quidam”, and “Rzecz o wolnosci slowa” (On the freedom of speech) are the best known. His cycle of poems, Vade-mecum, is recognized as a great work of literature today but was not published until 1947. In addition to his poetry, Norwid also wrote novellas and plays.

Cyprian Norwid’s copy of the Divine Comedy was acquired by the University Library in 1916 but its significance has only come to light recently when it was re-cataloged. Norwid’s initials appear on the front board near the clasp and his ownership inscription on the title page bears the date and location of Florence, 1846. A rubbing of his signet ring also appears on the title page. He most likely purchased the volume secondhand, based on an Italian count’s ownership inscription on the front endpapers and the lavish leather binding that includes a brass clasp at the fore-edge, a luxury that seems incongruous with Norwid’s chronic poverty. It is also likely that he used this volume to translate two songs from the Inferno and one song from the Purgatorio. These translations were made while Norwid was imprisoned in Berlin in June and July of 1846. Light pencil markings in these areas of the text further support this claim. Through Norwid’s letters, we know that Dante occupied a special place in Norwid’s literary influences. Selections from Norwid’s translation were published in Chimera (v.9, no.27) in 1905 and are available online in a digital facsimile (link to http://www.bilp.uw.edu.pl/chi/t9/foto/n415.htm) 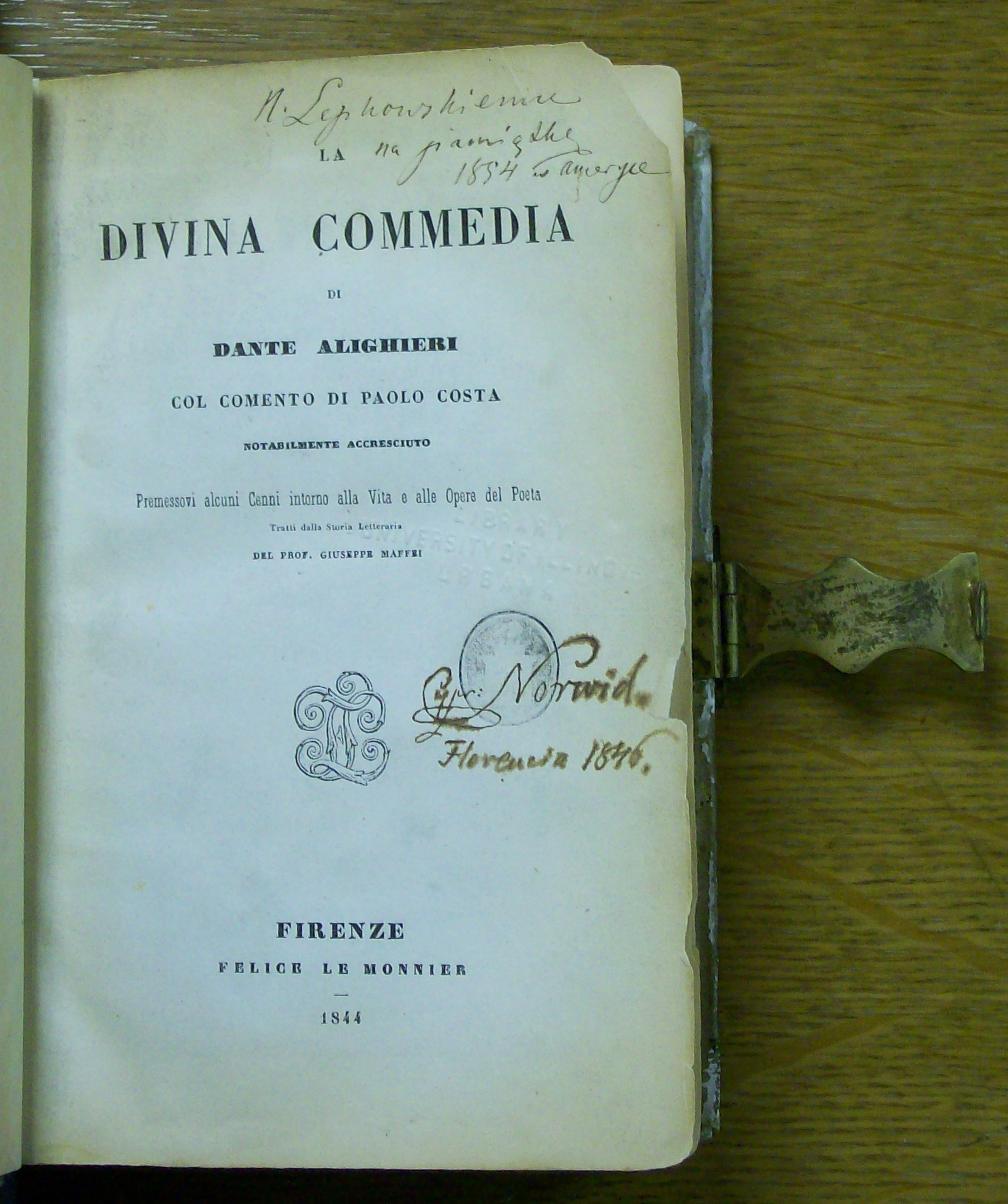 In addition to the ownership inscription, there is also a presentation inscription from Cyprian Norwid to Numa Lepkowski on the title page: “N. Lepkowskienice na pamiatke 1854 w Ameryce.” Lepkowski is listed in The New York City Directory for 1842 and 1843 as a guitar teacher and is thought to have later moved to Philadelphia. Lepkowski’s name is mentioned in studies of Polish life and culture at that time in the eastern United States, but any connections he had with Cyprian Norwid remain unknown and he is not mentioned in Norwid’s surviving letters. LB, AD