“Satire’s my weapon. I was born a critic and a satirist; and my nurse remarked that I hissed as soon as I saw light.”

In the vault of the Rare Book & Manuscript Library of the University of Illinois at Urbana-Champaign, we recently rediscovered a correspondence collection of the London actor and journalist Barnard Gregory (1796-1852). Gregory edited and owned The Satirist; or, Censor of The Times, a London weekly paper and scandal sheet which was first published in 1831 and ran until 1849. Gregory committed libel and frequently blackmailed the subjects of his publications by sending them manuscript copies of the scandals he intended to print and threatening to publish them if not paid by their maligned subjects.  As G.C. Boase so elegantly states, “The weak yielded and were plundered, the strong resisted and were libeled, when, owing to the uncertain state of the law and the expenses attending a trial, it was not easy to obtain any redress.” Gregory was involved in several court cases related to his nefarious practices and was imprisoned on several occasions during his lifetime. Gregory was also fascinated by the theater and performed as an amateur actor. His reputation as a scandal monger, however, made public performances a bit of a spectacle. Twice in his career as an actor, Gregory’s performances were disrupted by riotous mobs.

Many of the letters contained in the collection are anonymous praise and contributions of content from enthusiastic patrons of the paper. One fascinating element of this correspondence collection, and a potential source of research, is the glimpse into Victorian hypocrisy: a thirst for scandal, paired with a prudishness and obsessive fear of blemishing one’s reputation. Papers such as Gregory’s The Satirist found a captive audience, as did the penny dreadful serials with their gruesome tales of murder and villainy. The submissions to The Satirist, while generally not grisly, do tend toward the bawdy. In an undated letter, the correspondent Lynx asks Gregory to use his powers as an editor to publicly admonish an exhibitionist. Another submission, again undated, is a nuptial poem for Victoria and Albert, with a very explicit note written in another hand (perhaps Gregory’s?) in the top margin. 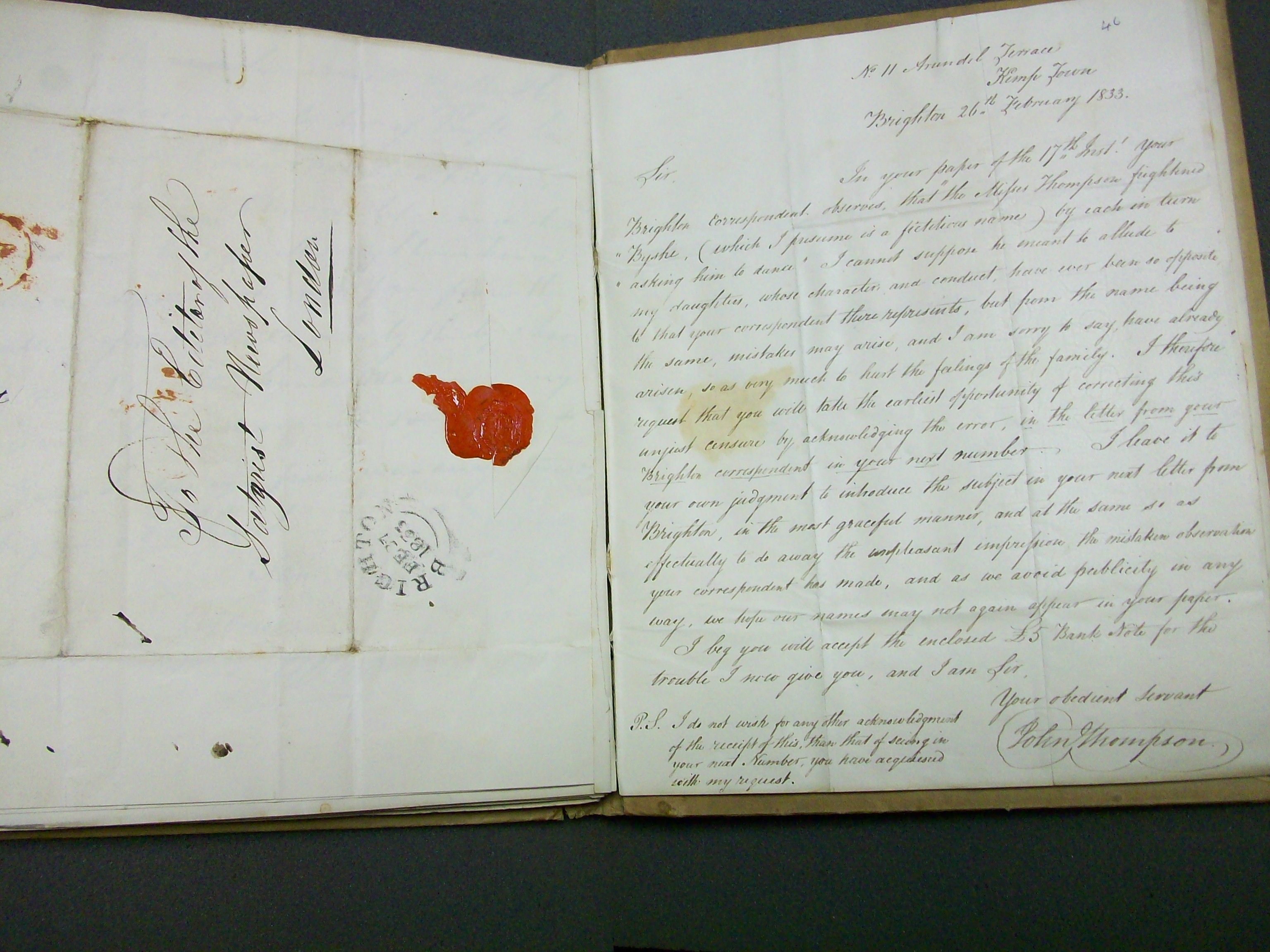 Many of the letters are also from readers asking Gregory to print corrections to previous publications, and these show very well the extent of Victorian prudery. One letter, dated February 26, 1833, from John Thompson, asks Gregory to clear his daughters’ reputations which were endangered by an article printed by The Satirist on incidents in Brighton stating that the Misses Thompsons “Frightened Byshe by each in turn asking him to dance” (The Satirist February 17, 1833). Thompson states that he enclosed £5 in the letter for the printing of a correction.

The correspondence collection also contains many wonderful examples of Victorian letter-writing culture, including wax seals, stamps, and cross-writing. These items are of interest both to scholars and to anyone curious about this period of history. 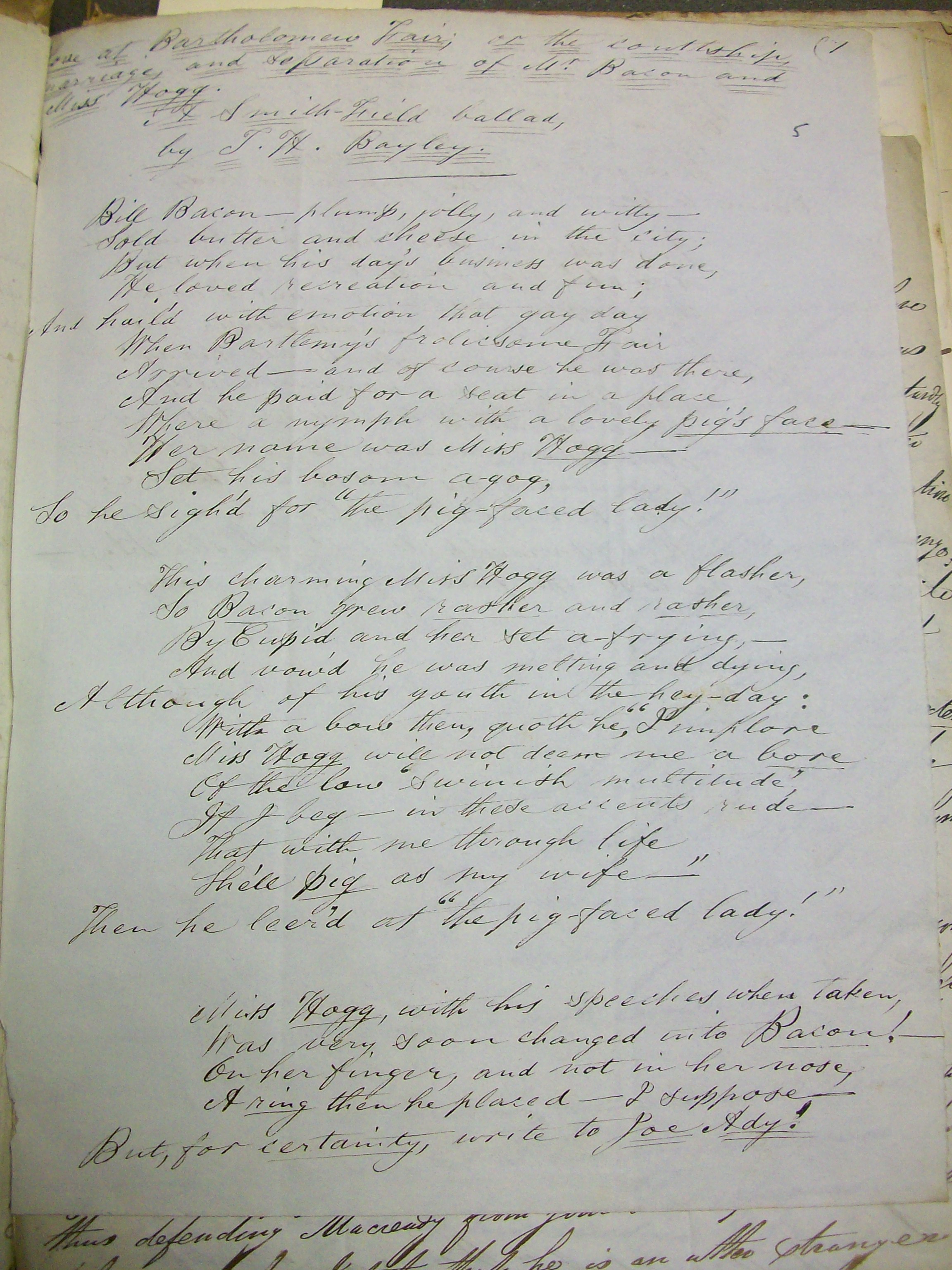 Some issues of The Satirist can be found at the Rare Book & Manuscript Library and it can be read online via the University of Illinois’ subscription to 19th Century UK Periodicals. For more information on Gregory, see G. C. Boase’s article in the Oxford Dictionary of National Biography. LK